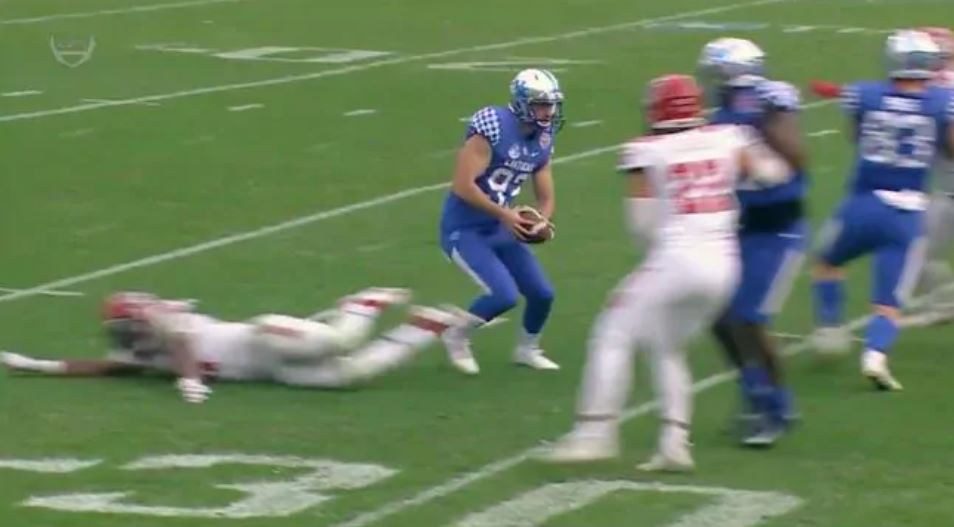 While there are pretty obvious differences between Aussie Rules Football and American Football, there’s definitely a bit of crossover there. After all, they’re both pretty f**ken removed from the game the poms took with them, and both of them rely on the hands pretty bloody significantly. Still, when it comes to kicking, the two sports have a fair bit in common. Just ask former Fremantle Docker, Max Duffy.

While AFL fans might know Duffy from his days at the dockers, he’s better known these days as the punter for the Kentucky Wildcats. In his farewell game for the college football team, he chose to draw on his AFL skills with a move that sent the yanks into meltdown.

WE SEE YOU, MAX DUFFY 👀 pic.twitter.com/7fvZ8BIyQK

Have a watch of the video below to see him fake a punt that blew minds over there. Don’t get us wrong, the average AFL fan, perhaps even the average AFL-loving schoolkid would see a move like that and think it was business as normal, but it was still pretty good.

Coming at a pivotal moment in the match, he was asked about it afterwards.  “That play by Max Duffy is one of the coolest things I have ever seen a punter do,” Kentucky sports radio host Matt Jones tweeted.

After the game, Duffy told RSN Breakfast the following:

“We’d done a bit of homework in the week leading up on one of the guys that came after it. He blocked a fair few punts during the year. The plan was to block him. Apparently we didn’t want to do that. I knew he was going to be coming after it pretty hard and it was just a spur of the moment (decision) to go back to the AFL days.

“When I went off to the sideline I was pretty p***ed off to be honest because we didn’t do the job that we wanted. But then I got to the sideline and all the guys were going crazy and telling me ‘You’re going to be on ESPN’ and ‘That’s definitely top 10 (on SportsCenter)’.”

Yeah, nah, it was pretty good. Give it a squiz.

Final thought: We’ve got a pretty good opportunity here to showcase some of the other routine s**t we bust out in the AFL that’d be f**ken ground breaking over in the States. If you can think of other mintox s**t American football fans would crack a big stiffy over, load it into the comments section. See you there, ya legends!