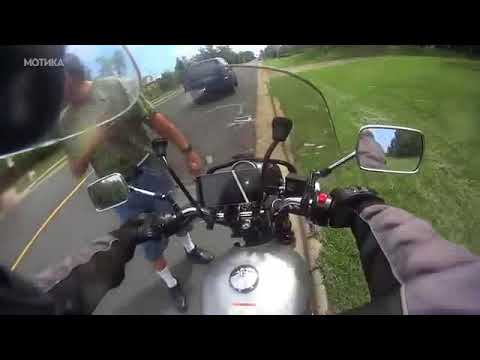 Footage Of This Canadian “Road Rage” Incident Has Gone Viral

These days it seems like everyone suffers from a little bit of road rage. If there’s a close call on the roads it’s not unusual to see two adults just lose their sh**, flip the bird and exchange colourful language. And that’s what makes this video so weird. After a near incident, these delightful canucks check up on each other and shake hands repeatedly.

We all know what it’s like on the roads these days. It’s pretty bloody crazy. One minute you’re driving calmly on the way to work when some f***ing cyclist is riding on the right-hand side of the bike lane, some f***ing plonker is driving 5 kilometres under the speed limit, and some total f***ing numb-nuts is flashing his lights at you trying to get YOU to hurry up. It’s a stressful situation.

Reminds me of Road Rash for some reason. Credit: motika/YouTube

You know you shouldn’t have your passenger throw a bottle at that cyclist, but seriously, the council built you a bike-lane ya dickhead. Use it. As for the prick going too slowly, it’s obvious they got their licence in a bloody cereal packet and the dude behind can get munted. If he doesn’t back off you know you’re gonna slam the brakes on.

We truly live in the era of road rage. The daily commute can feel like a scene from Mad Max. The act of letting someone merge sensibly is a sin, and the ability to calmly move on after a situation is a thing of the past.

Enemy on the horizon. Prepare the bludgeoning stick! Credit: Motika/YouTube

Unless you live in Canadia that is. I don’t know many Canadians, but the ones I do know are pretty bloody cruisy. They’re kinda like Ozzies but they’re way politer.  They’re so polite it’s almost creepy, but if you watch this video you’ll see how that’s a good thing on the road.

Fark! That was a close call! Kill him! Kill him! Credit: Motika/YouTube

I think the guy in the van might be Tobias from Arrested Development, but he’s a very caring and sensitive guy.  The motorcyclist, apart from his theatrics at the end, seems to really appreciate the apologetic gestures too.

What? Checking up to see if he’s OK. That can’t be right… Credit: Motika/YouTube

I dunno, maybe we can all learn something from this. Throwing sh** at cyclists who can’t stay in the bike lane can’t be the only sensible option.