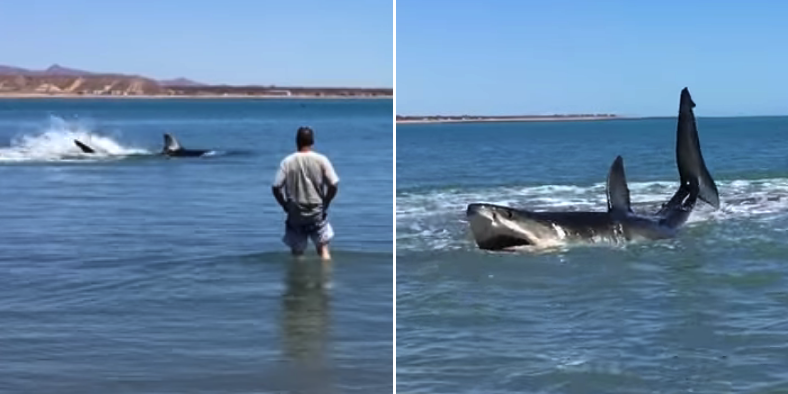 When dive boat operator Dale Pearson noticed something thrashing around in the shallow waters near his house in Baja California, Mexico, he naturally assumed it was a beached whale or a hammerhead shark, both of which are known to hunt in the area. But he was wrong. Oh so wrong.

Armed with a camera phone, Pearson and his buddy rushed into the sea in order to save the struggling animal but as they got closer, the pair discovered that it was actually a great white shark.

According to Pearson, who has experience with shark research missions, the impressive beast was approximately 15 feet (4.6 metres) in length and was thrashing around in 3 feet (0.9 metres) of water. This thing is a beast!

His incredible video shows the moment that Pearson and his friend realise that it’s actually a great white: “That’s a fu*king white shark,” Pearson can be heard shouting in disbelief. “Holy sh*t!”

Pearson managed to get extremely close to the shark but was careful to stay in the shallows so was out of reach of the fearsome predator.

The shark clearly has a large open wound behind its dorsal fin and Pearson states in the video that it was most likely caused by a strike from a boat propeller.

Afterwards, Pearson uploaded the video to his company’s Facebook page, Pearson Brothers Winery, where it has understandably gone viral.

Officials at the Marine Conservation Science Institute have shared the video on their own Facebook page, explaining that “the injuries from the boat propeller would likely not kill the shark. They are exceptionally tough with incredible healing ability.”

Pearson reckons the shark came into the shallow waters in order to hunt for stingrays, which make up part of the scavengers diet. Mark Domeier, marine biologist and president of the institute, agrees. “White sharks are generalists (and scavengers) when it comes to diet,” Domeier wrote on Facebook. “In other words they will eat whatever they want at that moment!”

According to Pearson, despite its mad thrashing, the shark wasn’t stuck and swam in and out of the shallow water at will. The following day, when he returned to the beach, it had disappeared.

Ironically, neither Pearson nor his friend were injured by the large shark but they were attacked by the stingrays. Pearson’s friend can actually be seen limping out of the water after being stung.

WATCH THIS INCREDIBLE CLIP IN THE PLAYER BELOW: