News reporter bumps into dog thief while reporting the story

We’re not sure about all you big bloody bewdiful d*ckheads, but if some bugger pinched our doggo, we’d be f**ken distraught. Deadset, we’d be heartbroken. Although, we have to say that if we had the slightest inkling of who might have taken it, we’d get off our ass and find that f**ken dog. Still, that story’s got nothing on a recent tale to come out of the states. While reporting on a dognapping, a sharp-eyed journo spotted the bloody culprit and called the cops while she had him on camera. Check it out.

After gorgeous German Short Haired Pointer Titus was flogged from a vehicle in a Boston car park, Julianna Mazza was on the scene to report on the story. According to Cambridge Police, the dog-napping was pretty bloody brazen. Titus was stolen in broad daylight, and surveillance cameras captured the culprit as he walked away with the dog.

Yesterday at approximately 12:32p, an unknown suspect broke into and entered a vehicle that was parked at 620 Memorial Drive & stole a 13-month-old white German Short Haired Pointer out of the vehicle. The suspect was then observed walking the dog over the BU Bridge into Boston. pic.twitter.com/titQ0WvPMM

Mazza and her crew decided to film the report in the car park where the theft occurred. And, it turns out the bloody thief couldn’t help but return to the scene of the crime. As Mazza was reporting, he came strolling into the vicinity – with Titus in tow.

Please note: the dog’s name is “Titus.” We apologize for the typo.

Mazza realised that the bloke walking the dog who looked like Titus looked an awful lot like the bloke in the surveillance photos, and she got down to read Titus’s collar and confirm his identity. Naturally, she questioned the dodgy bugger who had Titus on the leash.

WHAT ARE THE ODDS?!
My photog John & I were covering a stolen dog story in Cambridge when all of a sudden we spot THE DOG!!! We were able to convince the suspect to give us the pup & kept him engaged until @CambridgePolice arrived shortly after. We are SO HAPPY Titus is safe! ❤️ https://t.co/FPg2Pfsqc2 pic.twitter.com/s1ESKLiqIb

Here’s what he had to say: “He was just barking in the car, and I walked past the car and I thought it was supposed to be a dog I was dog walking,” Gariepy said. “It wasn’t a kidnapping, it was just a simple mistake.” He’s since been charged with larceny and breaking and entering a vehicle.

Yeah, sure it was. Anyway, Titus was reunited with his owner, Greg Siesczkiewicz, who reckons he’s thrilled to have Titus back.

We are so grateful for @CambridgePolice quick response and for making sure the media had a photo of Titus so we knew what to look for. And of course so glad that we just so happened to be in the right place at the right time 🙏🏼 pic.twitter.com/GRlMnIljP0

As for Mazza, she posted on Twitter, saying, “I NEVER could’ve imagined that my photog & I would be the ones to actually FIND him!” 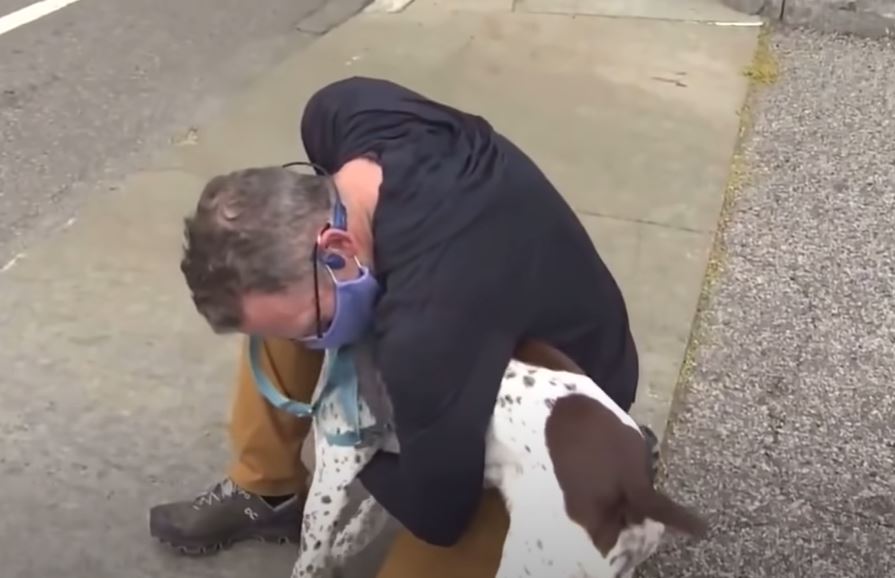 Final thought: What an epic bloody journey. Deadset, it’s not often stories like this have happy endings, but thankfully this one’s a bloody doozie. We’re calling Mazza a top sheila for her fortuitous sleuthing and saying that bloody Titus is a champ. Julianna, this top sheila badge is all yours!