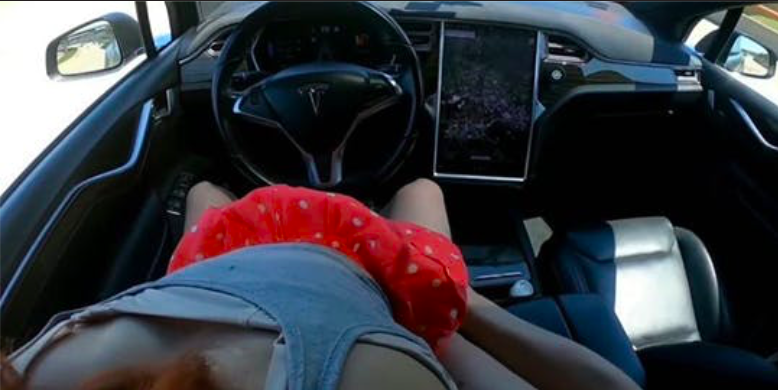 The co-founder and CEO at Tesla Elon Musk did not disappoint. He weighed in on Twitter and quicker than a possum up a tree, he was stirrin’ up some funny banter.

He didn’t mention the actual clip, but Musk wasn’t fooling anyone… Sticks out like dogs balls that he’s talking about the cheeky clip ay.

In an interview with Insider, Taylor said:

“It was mainly a straight road, but it had a lot of traffic.

“We had a lot of cars driving by us.”

“We did have one scare where I hit the steering wheel and knocked it out of autopilot mode. I wouldn’t recommend it since it is dangerous.”

F**k me, that’s scary enough to knock the freckles off a redhead. And may I just say thank you to Taylor Jackson for the PSA confirming the dangers involved.

Yeah nah, I would never have guessed that getting a hot beef injection in a moving car is not recommended.

how are the seats holding up against stains? 🤔#asking4aFriend

Elon Musk is rich AF, and this savvy business bloke understands that any publicity is good publicity.

“Autopilot is intended for use with a fully attentive driver, who has their hands on the wheel and is prepared to take over at any time.”

Final Thought: The future and its technology are coming at us at a rapid rate. Looks like 2019 is the perfect time to be telling people that a moving vehicle without a human driver is not the place to be loading ya clown into someone’s cannon. Certainly gives new meaning to “safe sex.” And Driving Miss Daisy for that matter.