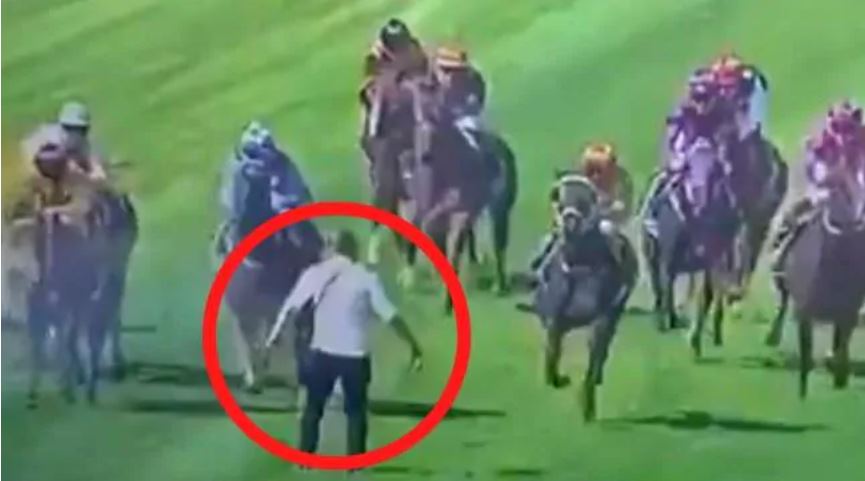 We talk about dangerous animals a lot here at Ozzy Man Reviews, but one species we tend to pass over is the bloody horse. Yeah, nah, we know they’re not exactly savage predators out to munch on your guts, but if one of those big b**tards is running at you, you’re in deep s**t. And that takes us to New Zealand’s Trentham Racecourse. A ‘bloody d**khead’ has narrowly avoided a quick trip to Destination F**ked after running onto the course and standing in front of a s**t-tonne of horses barrelling towards him.

When we first saw this s**t online, we had to check our eyes. It’s pretty hard to believe what you’re seeing. After all, it’s so f**ken stupid, you can’t imagine anyone willingly putting themselves in that situation, let alone putting so many other horses and jockeys at risk.

Horrific scenes eat Trentham, this guy does not realise how much danger he is putting everyone in. pic.twitter.com/rOdMJqmA4p

The incident happened at the Wellington Cup, and there were f**ken loads of people there to see it unfold. One minute the horses were f**ken stampeding towards the finish-line, and the next there was a dude with an obvious deathwish standing in front of the speeding horses.

Deadset, you do not want to get hit by one of those f**kers. They weigh upwards of half a tonne and were moving faster than sixty clicks an hour. If he’d have been collected, they’d have been picking his face out of his poop-chute.

Incredible vision at Trentham. Jockeys should be congratulated for the feat on not cleaning up the person standing on the track ! pic.twitter.com/cSHs4s1Fmd

No wonder commentators were shocked. Fox Sport boxing commentator Ben Damon called him a ‘bloody d**khead’ and New Zealand racing stables Te Akau Racing called the move ‘barbaric’, saying he could have killed the horses and the jockeys. And, yeah, we kind of agree. But then, you know, it’s pretty rich coming from a horse-racing stable.

Hopefully someone in the crowd grabbed him and held on for security to grab him https://t.co/c3LmDEOYmC

Anyway, that’s not the point of this story. The insane act is, and there’s no wonder footage of it went viral. Check it out.

Final thought: If you’ve seen this, let us know what you reckon. We’re pretty shocked no one was hurt, but far out, what a f**ken nutso thing to do!