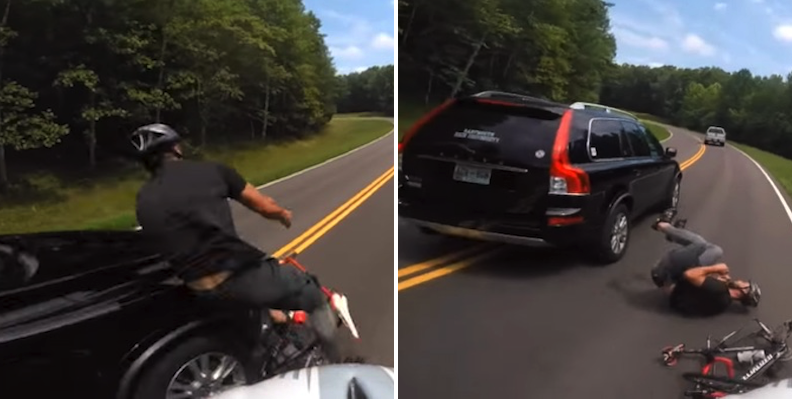 Cyclist Gets Brutally Mowed Down By Car, The Internet Is Divided As To Who Is At Fault

A video has emerged of a road rage incident and the internet is divided as to who’s at fault: some people are calling the driver a lunatic while others have pointed out what an assh*le the cyclist was being and that he kinda brought it on himself. We’ll let you reasonable folk be the judges…

Buddies Tyler Noe and Greg Goodman were out riding their bicycles through the Natchez Trace in Tennessee when all of a sudden, a car intentionally rammed Tyler from behind, knocking him to the ground before speeding off.

Although he managed to get back to his feet, Noe needed to go to the hospital for treatment. The driver in question has also apparently targeted cyclists in the past, as noted by Goodman in a Facebook post.

“Three hours ago this person intentionally hit my friend Tyler Noe on Natchez Trace. We had a witness behind us who said he has seen this same Volvo try to hit someone else last week. Tyler is at the hospital and doing ok. He is one tough dude! ” Goodman wrote. I reckon Id assume the fetal position, too…

The Natchez Trace, also known as the “Old Natchez Trace”, is a historic forest trail that runs for about 700km from Natchez, Mississippi, to Nashville, Tennessee and links the Cumberland, Tennessee, and Mississippi Rivers.

Cyclists are permitted to use the entire lane in that area and the speed limit is 25mph (40kph) so while what Noe was doing was dickish, to say the least, he wasn’t actually breaking any laws.

So after careful consideration, I reckon that Noe was being a bit bloody inconsiderate and could have easily moved over (even though he wasn’t required to) and the driver is a fu*king lunatic. Not sure he deserved to be run over though: that collision looked heavy!

WATCH THE VIDEO ON THE PLAYER BELOW AND JUDGE FOR YOURSELVES: