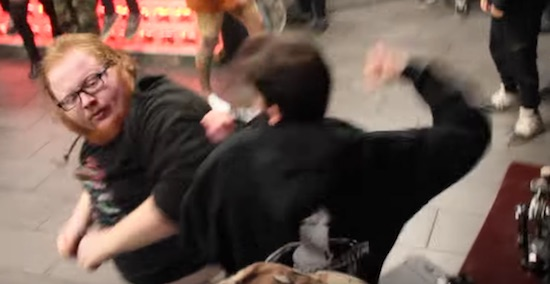 In a chicken restaurant called ‘Cluck U’, there was a secretive gig where the hardcore band “Drawn Out” played for a bunch of people who break out in what I’m told is called ‘hardcore dancing’. Now if there is one thing I like more than a chicken leg, it’s kickin’ my leg into someones face as I rock out to a song.

Don’t get me wrong; I’m not anti-moshing and who doesn’t love a bit of rough housing, but the general gist of this hardcode dancing seems to be “I do whatever the f**k I like, everyone stay out of my way.” Punches, kicks, jumps, thrashing, flips, (I’m pretty sure I saw a few cartwheels!?) whatever – anything goes. Only 8 seconds into the video a you can see someone fist windmilling into the crowd, only for some one to sucker punch them back.

Tensions boil over and people are actually punching and kicking people in the face. Less dancing and more of an actual fight. OR is the line blurred so much that’s it’s kind of the same thing? If you have ever seen or been in a mosh then you’d know what it’s like to some degree. It’s very ferocious and if you get in the middle you are putting yourself at risk. But that’s the fun and excitement of it. People just get carried away and enjoy the music and as long as everyone has a good time then no harm done. Hardcore dancing however seems to take things to the next level, call me old-fashioned, but when I go out to have a good time, that rarely involves the possibility of my nose being plastered all over my face. F*ck You Nah F*ck You.

CHECK IT OUT ON THE PLAYER BELOW: