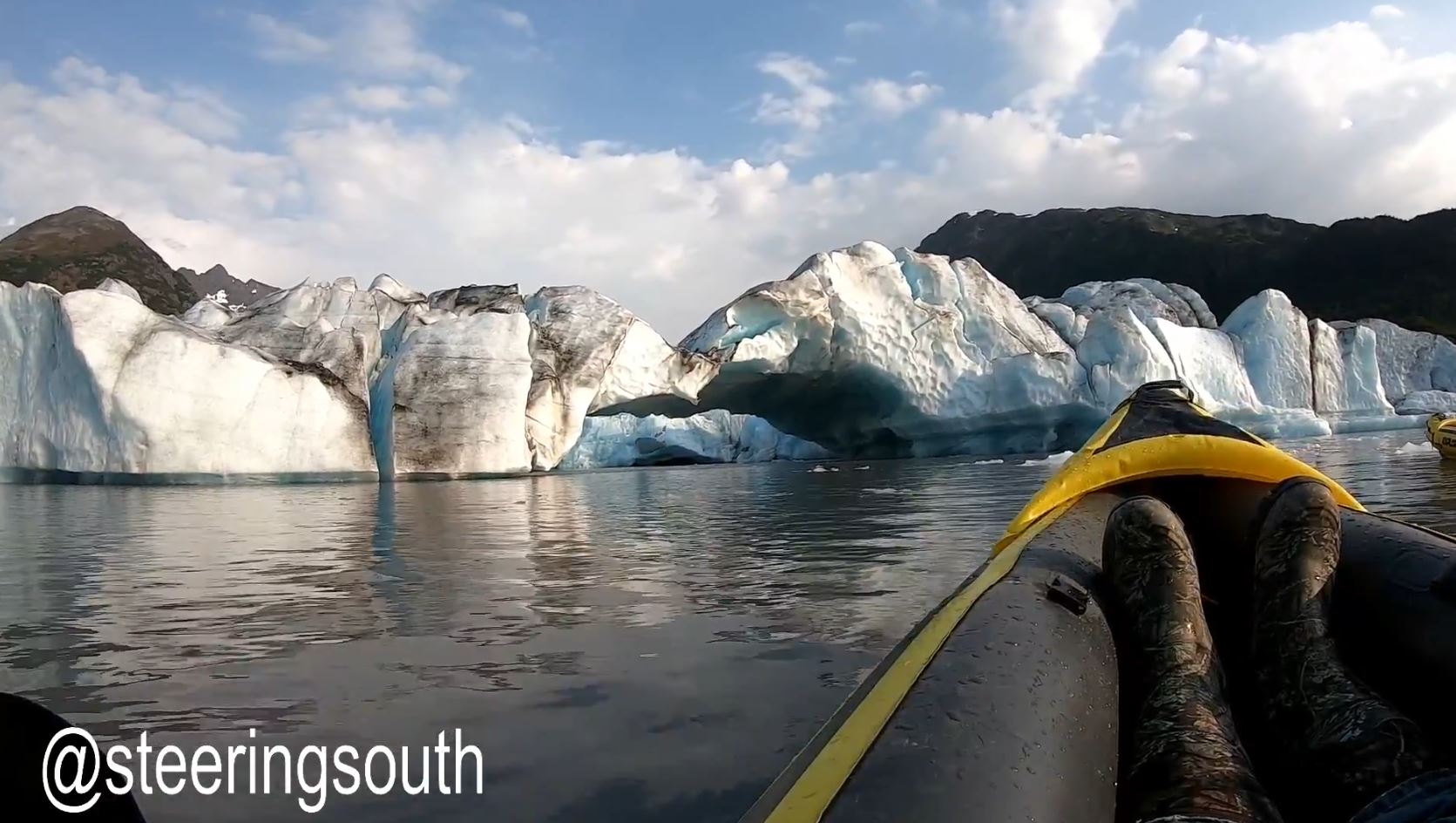 We’re gonna hazard a guess and assume that you guys are familiar with the idea of curiosity killing the cat. You should be. It’s a pretty universal idea, but just in case you’re not, it’s basically an old adage that suggests your curiosity – even if you’re not a cat – can get you into trouble if you go stickybeaking in places you shouldn’t. Anyway, the reason we’re rambling on about this is because a couple of kayakers at Spencer Glacier in Alaska almost found out the hard way…

As you’ve probably figured out, we’re heading to Alaska for this one. So, obviously, rug up warm and get your kayak ready, because this is quite the adventure. Deadset, in our experience, kayaking can be pretty bloody risky. To us, it seems that at any moment, a violent seal might slap you with an octopus or a hillbilly might want you to ‘squeal like a pig.’ 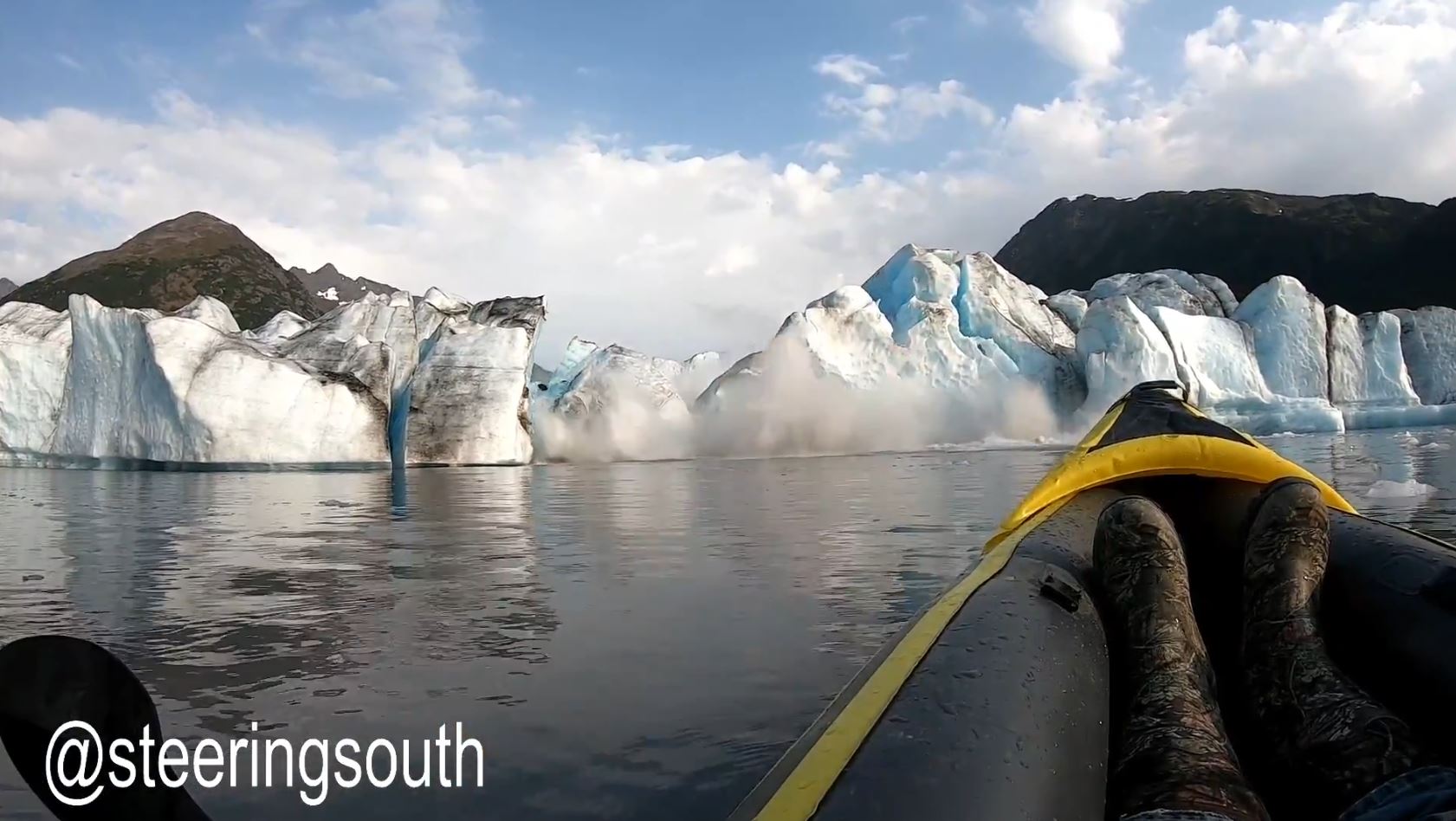 This time, we’re off to investigate what sounds like calving. Now, for the uninitiated, that’s not the cattle-related calving. Yeah, nah, we’re talking about icebergs giving birth to new icebergs and/or splitting apart. According to today’s tour-guide, “We keep hearing calving happening and big splashes…it sounds like a gunshot going off. We’re gonna try to get over to where we think it’s happening.” 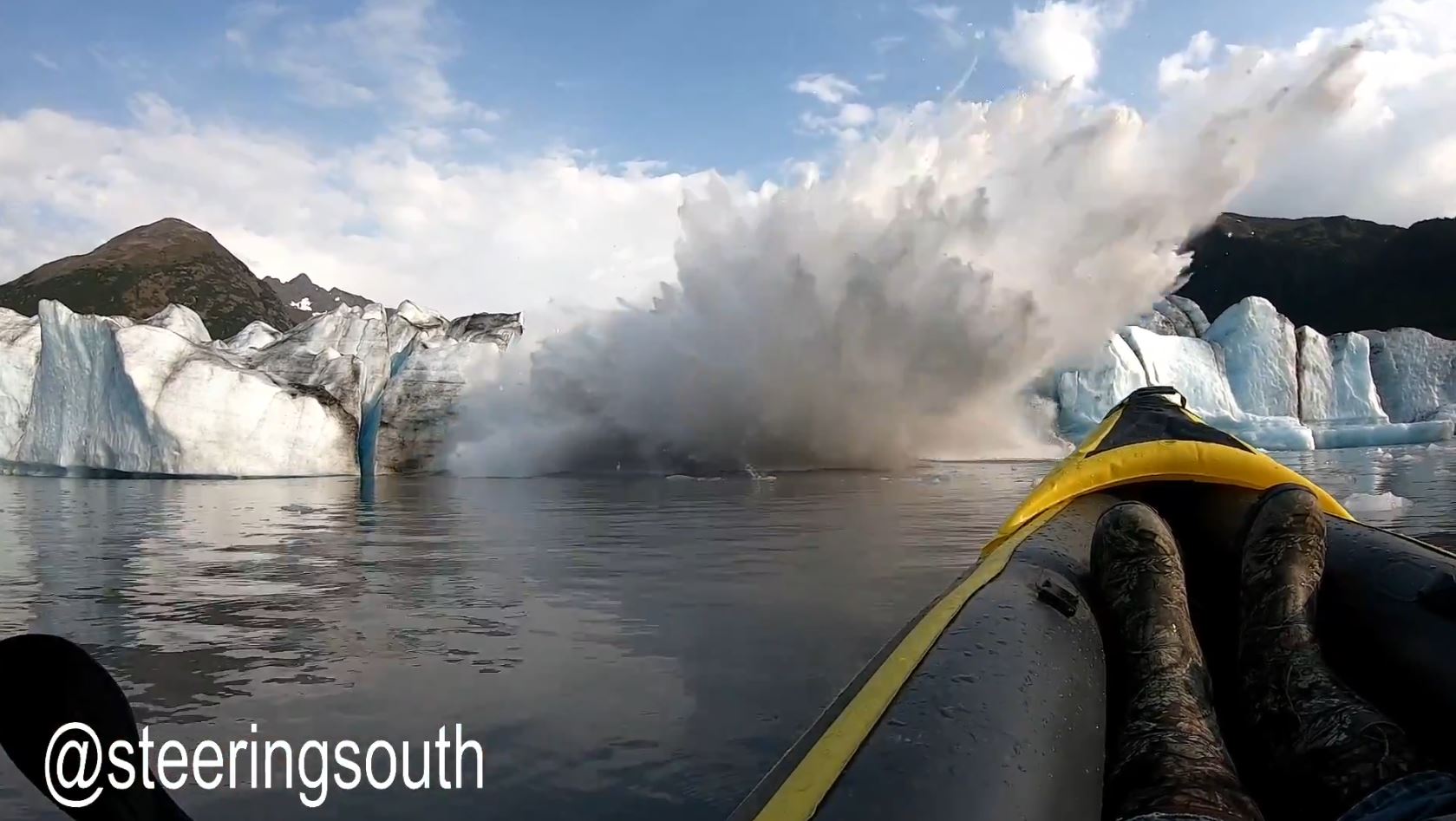 A few paddles later and we’re left floating serenely in front of what can only be described as a bloody bonza glacial bridge. Josh Bastyr, one of our tour guides, eventually pulls us up in front of it and we get to watch big chunks of ice breakaway and hit the water.

And then comes the big shock. We watch a few bits of ice hit the water pretty hard and then our tour guide says, “Man, when that thing goes,” and he must be bloody magic because that’s when it goes. The splash is bloody magnificent. 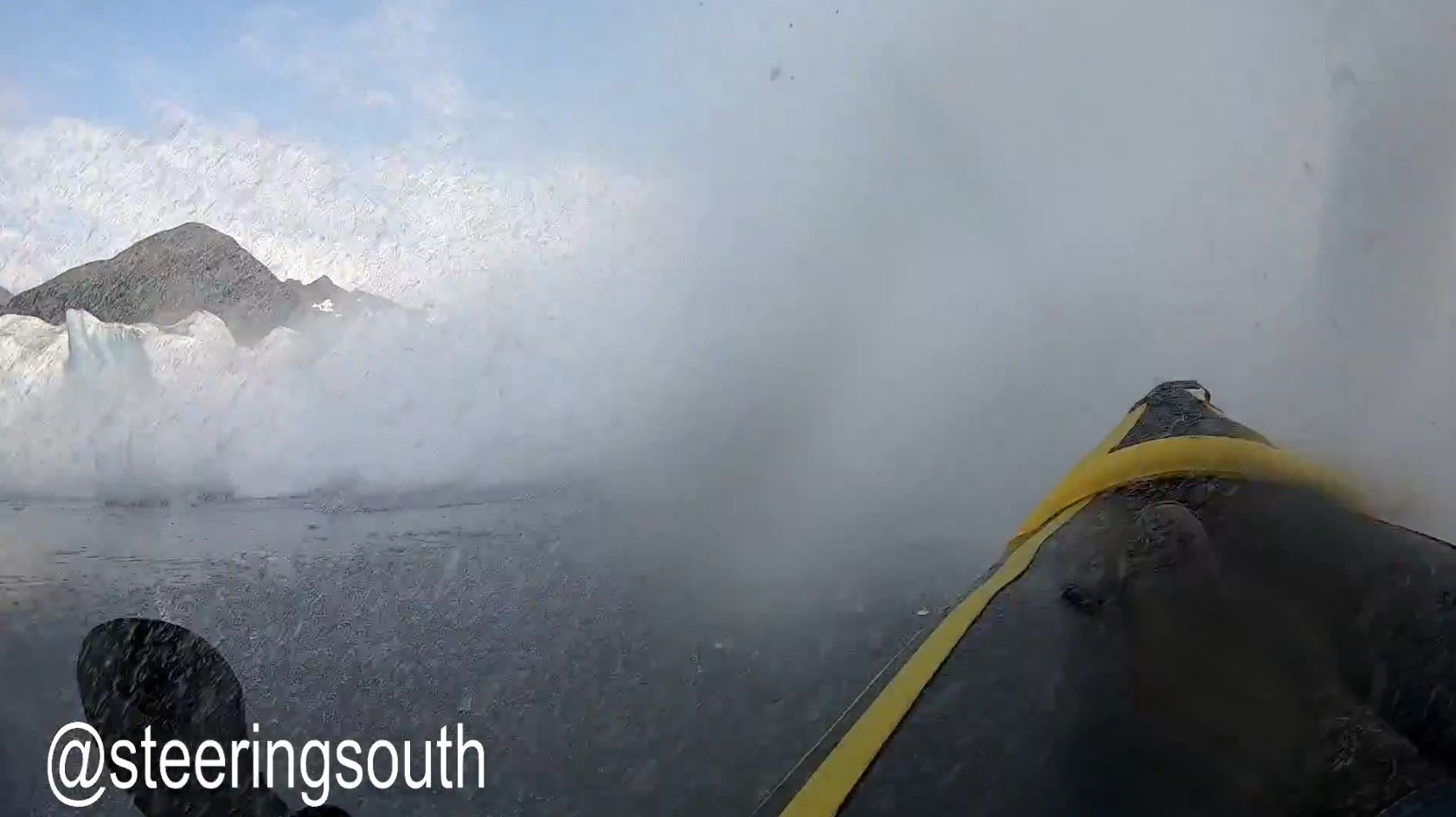 Bits of bloody iceberg and glacial bridge go flying through the air and the tour-guide gets bloody drenched. Seriously, the splash is even bigger than you’re gonna expect, so you may as well just watch the video and enjoy it. 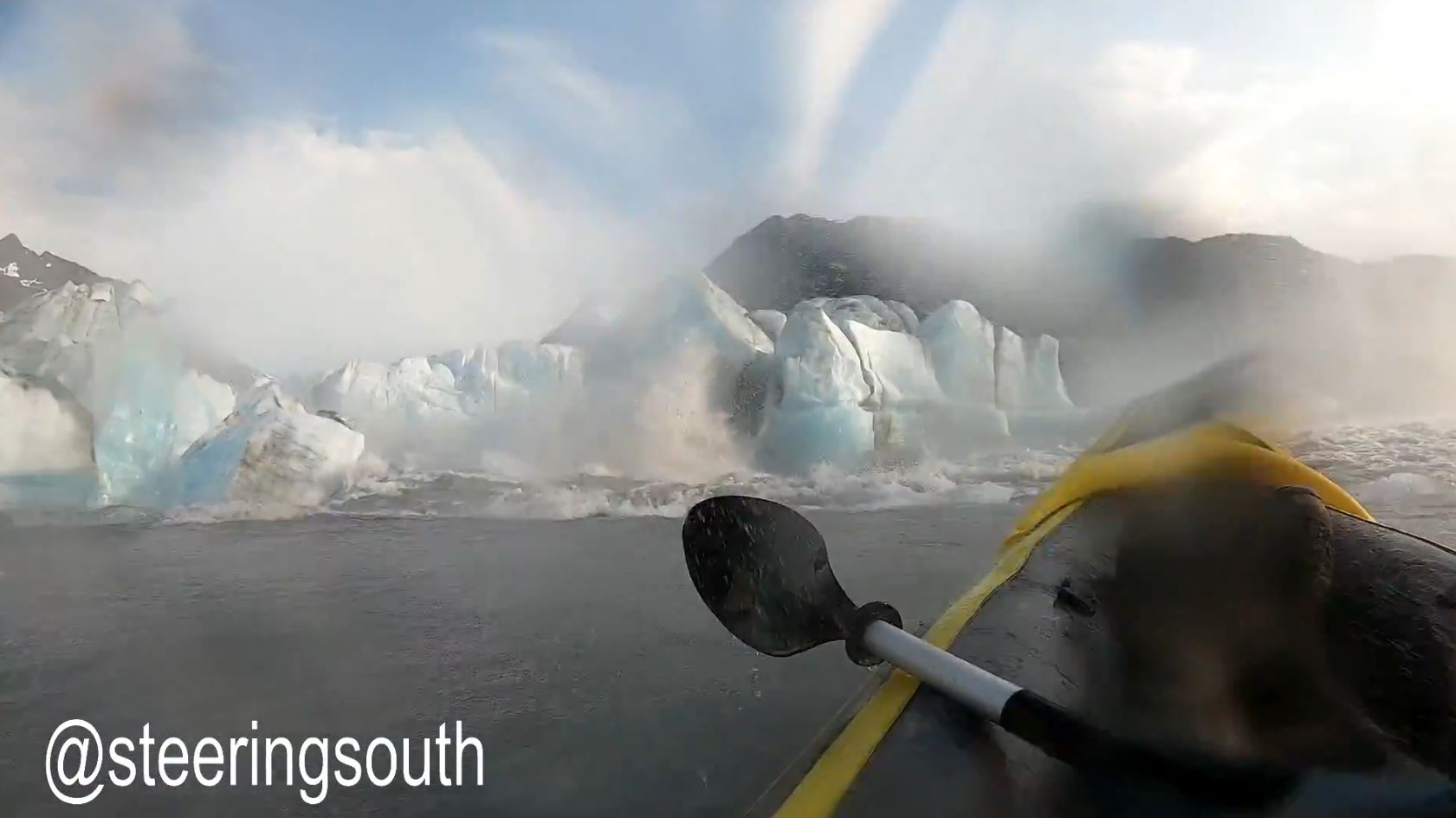 One of the other blokes who was there, Andrew Hooper, said, “We’re lucky to be alive right now. We survived, but that was insane. We’re soaking wet and we were obviously way too close. We knew that going into this. Our wives told us not to get close, but that was probably the coolest thing I’ve ever done in my life.”

Final thought: Look, as they said above, they knew they were doing the wrong thing. If you’re out there, only do this stuff in a controlled situation or if you’re a pro. Seriously, be safe. You never know when a big chunk of ice is gonna f**k you right up.