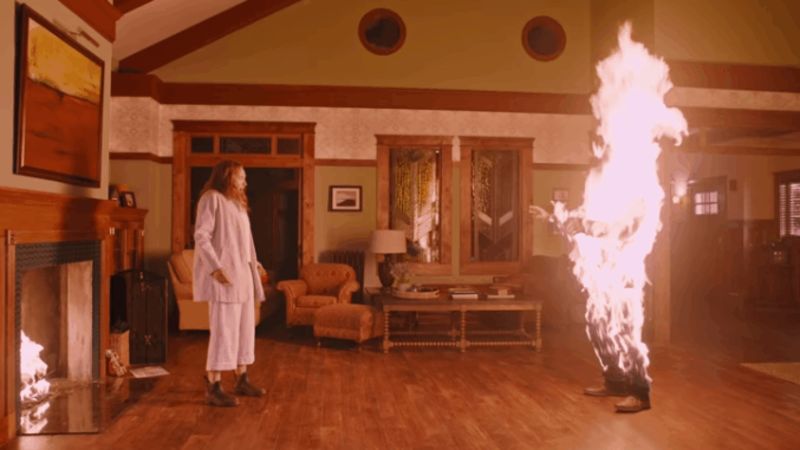 G’day, chuck here. How we all doing today?

When you’re an Ozzydad and you’re spending some time with the kids, taking the little buggers to a movie is always a safe – and popular – bet. They get a movie, they get popcorn, they get a bloody tops experience. There’s no denying it: pick a popular kids movie, and it’s the kind of family-friendly event that can’t go wrong.

You’d think so. You’d really really think so. Have a bit of a brainstorm right now and consider what could really go tits-up at the movies? Short of ya little bloke spilling his soft-drink or needing to take a piss right in the middle of the movie, you’re probably thinking, yeah-nah, f**k all to be honest, mate.

If ya are thinking that, you’re f**ken wrong. Really wrong. More wrong than a wombat with a wallaby’s wanger in its wazoo.

Some bloody dropkick up behind the projector could cock your day right up with a hardcore horror movie trailer. Dead set. The kids are settling in to cram their faces full of popcorn while they wait for the fun and frolics of Beatrix Potter’s famed little bunny rabbit and you’re thinking f**k yes, two hours of peace and quiet. It’s a f**ken win-win!

Then the trailers start. Everyone loves the trailers – although, to get on a soapbox and spill the beans, what the f**k is up with people who think it’s OK to talk through the trailers? The rules of the cinema are pretty simple: you walk in, you turn off your phone, you shut the f**k up, you enjoy the movie. Not hard. If you are a trailer-talker, I hope you sleep at night knowing everyone hates you! Phew, rant over. Come on, rabbits aren’t that scary. Credit: A24

Right, the trailers start. A hush descends over the cinema and the kids are treated to a few other fun little trailers. There’s a walking talking CGI bear of some description. There’s a divorced dad coaching a baseball team. There’s a full-on trailer for new horror film Hereditary and it looks bloody mint – but the kids are crying and randos are calling out to the projectionist to stop the trailer. It needs to be shut down. Fast.

As you can imagine, people were pretty fired up.

“It was dreadful,” one parent at the screening told the local news website WA Today. “Very quickly you could tell this was not a kid’s film. Parents were yelling at the projectionist to stop, covering their kids’ eyes and ears.”

Another explained how other parents, “fled the cinema with their kids in tow.”

What does the projectionist have in common with the toasty guy? They’ve both been…fired. Credit: A24

Final thought: Hereditary looks like a kickass film, but bugger me sideways with a swizzle stick, it’s not for kids. Watch the trailer here to check out exactly what the littluns expecting Peter Rabbit were dished up!

If you’ve been paying any attention to the offbeat section of the news over the last few years, you’ll know that bloody Russia’s been repeatedly forced to confront a strange new natural phenomenon: f**k-off huge sinkh...

If you’re anything like us you probably remember wondering what it’d be like to fly a kite so f**ken well that you could get mad air from it. Typically, that s**t’s just a pipe-dream, but if a kite’s big enough, it’s ...