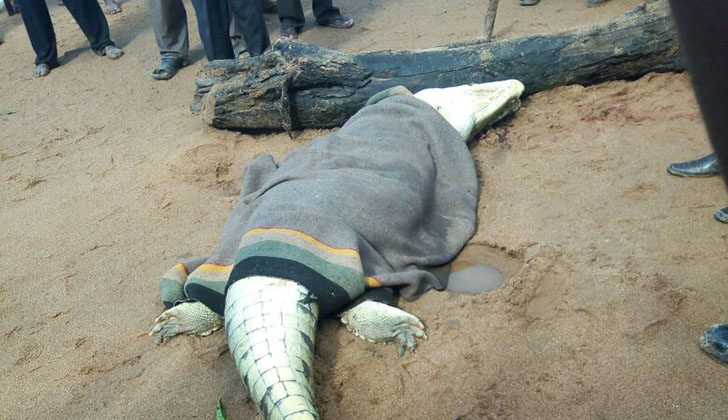 Deep in Zimbabwe people have to fear for their lives from all sorts of wild animals. The crocodile is one I am familiar with and you cannot take these big bastards lightly. Unfortunately it’s a way of life in Zimbabwe and what they have found is quite disturbing.

An 8 year old boy had been missing and the villagers in Mashonaland Central Province thought that he had been eaten by a crocodile. The villagers found and shot the beast in question and decided that the only way to know for sure was the cut open the croc and check inside. Upon cutting open the massive croc their suspicions were confirmed: the animal had unfortunately eaten the boy. Remains of the child were found inside the croc and you can see in the video below villagers and a policeman watching on in silence as the discovery is made. A hand protrudes from the crocodile after it was cut open.

Poor kid, that’s not a good way to go. The remains of the boy, whose name has not been revealed, were removed from the crocodile and buried two days later in a village funeral. The boy’s remains were found in the animal’s stomach.

It’s believed that the crocs have come out of hiding due to heavy rain in the area recently. To make matter worse, a crocodile was recently shot dead in Beatrice, a farming community in the neighbouring province of Mashonaland East, with what were believed to be the remains of a fisherman in its stomach.

Watch the footage below. Warning, it may be disturbing to some viewers: