At the risk of sounding like a bunch of violence-loving lowlifes, we bloody love a bit of the old ultraviolence here at Ozzy Man Reviews. Still, we’re not animals. We do have a couple of parameters on the violence we like to enjoy. First of all, it’s gotta be consensual. None of these random acts of violence on innocent bystanders for us. Secondly, there’s gotta be an element of craziness to the violence we wanna discuss. Finally, it needs to be fairly spontaneous. So, let’s get to a kickass catfight that’s broken out in the middle of the road.

Generally speaking, we don’t usually think of sheilas getting into it when we talk about street fights. While some people think that might be a little bit sexist and insist that sheilas are every bit as likely to get into a bit of a fracas as blokes, we stand by it. When we think of street fights, we think of Russians or American frat-boys. 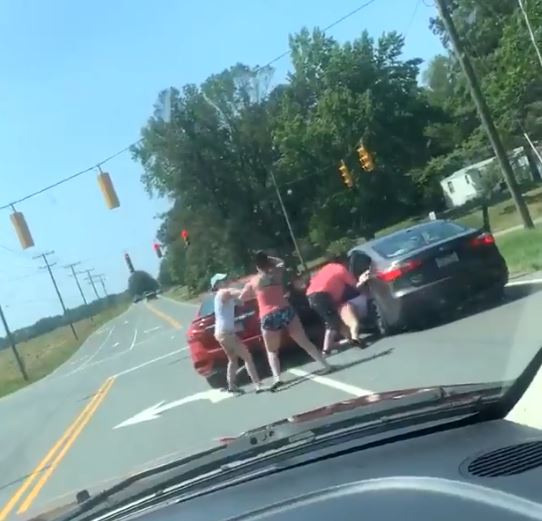 Anyway, we’re clearly wrong, because the bloody shazzas in this video are keen as mustard to throw down. And, er, yeah, we’re thinking one of these fiery femmes might even be up the duff. Now, if you’re gonna fire up the fisticuffs while your pregasaurus, you’ve gotta be a proper psycho. 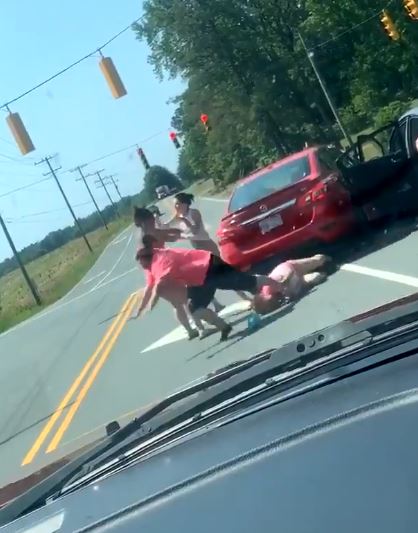 Anyway, this one was filmed at a red light in the town of Mebane in North Carolina, and you know what. It’s fairly friggen hectic. Posted by Timia, who was lucky enough to see the insanity unfold from the safety of her own car, she reckons this sort of thing happens, “Only in Mebane NC.”

When we join the action, these feisty sheilas are going at it hammer and tongs. One chick’s got another up against the door of her car and she’s playing her skull like a friggen drum. Another two are slapping the shame out of each other. Within seconds, the drummer goes for one of those second sheilas, but she bloody faceplants when she has her ankle tapped. Gold! 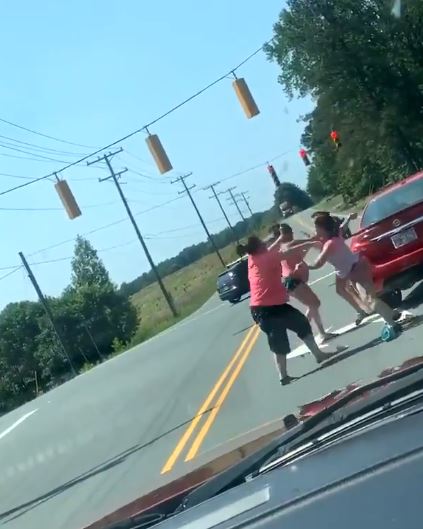 Of course, the best bit is when bloody Grandma decides it’s high-time the big guns get involved. She comes waddling over to the action and delivers some of her ‘special recipe’. Bloody excellent. 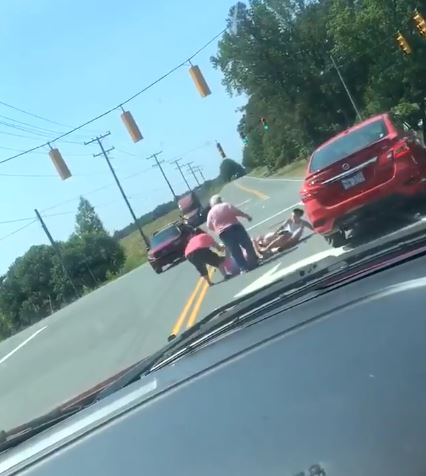 Final thought: Look, sometimes you see a fight and it’s incredibly confronting. Sometimes it’s terrifying. Occasionally, though, you get to see stuff like this. Have a bloody squiz at it and then let us know what you think started it. Good stuff, Timia. Good stuff, North Carolina.