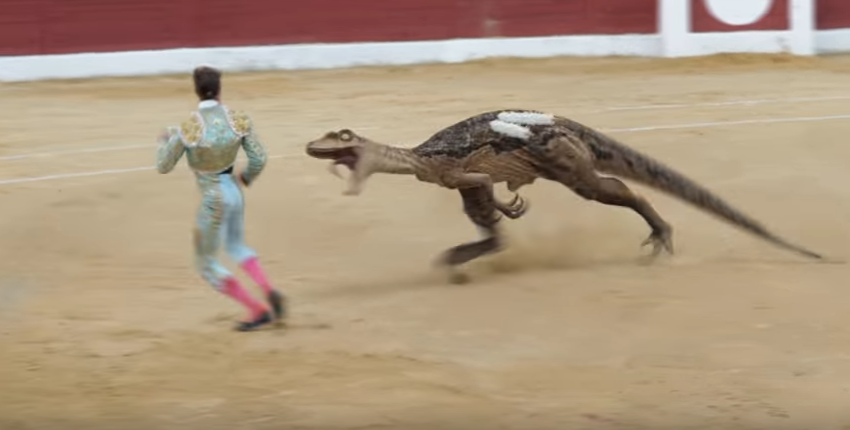 Lots of things change throughout history because they are simply just out dated.

Slavery, CDS, stoning people to death and Blockbuster (even though someone told me that ALL of them are still around today…) are or should be out dated. So should killing animals. Killing animals is so bad though that it should have never been a thing in the first place! There are exceptions however. Population control of species, dangerous animals… and food! But killing for entertainment is a big no no, no matter where you are or what you do. Bullfighting in Spain is a tradition, yes, but it’s not ok. You know how sometimes you see a matador getting gored and you are like fuck yeah take that! It’s because the bulls have finally got one back.

The ad shows a bull being replaced by a CG velociraptor; a ferocious dinosaur that most people would not mind seeing killed if you’ve seen any of the Jurassic Park movies. However it becomes clear that you feel sorry for the dino pretty quickly, as the beast is peppered by knives in its back. It slows down but is still continuously stabbed until it falls down. Then a smaller knife goes through its skull and it’s killed. Replacing that image with a bull shouldn’t change the brutality one bit. We think bulls are tough and strong and are so angry that they almost deserve it, but if I’m feeling sorry for a pre-historic killing machine that I know is FAKE, I should really be worried about what is currently going on on in Spain. That’s the message of the advertisement. Check it out for yourself below: