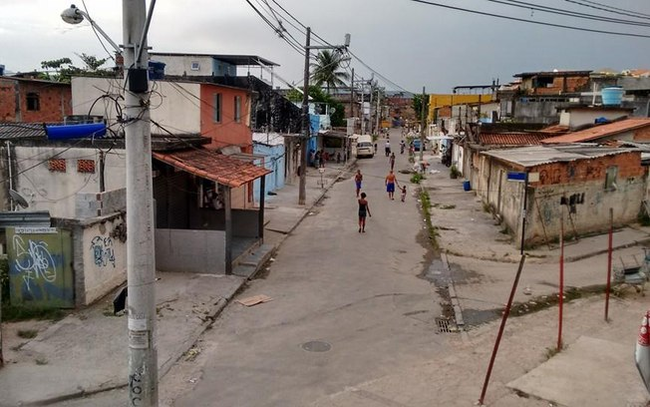 Before we start this one, we’re going to say that we’re doing our best to bring you a variety of stories outside of the doom and gloom of the coronavirus, but just as it’s pretty f**ken hard to give everyone a fair go, it’s not easy to find stories that don’t at least reference the virus right now. Still, you have to admit that this thing’s probably gonna change the world, and some of the stories are pretty f**ken interesting. Like this one…

Yeah, nah, Government responses to the virus have varied. Some have shut everything down as a way of coping. Some have staggered the f**k out of things.

Some have realised that letting the elderly die is going to save them billions in medical support and they need to line their pockets, and, finally, some have decided that it’s all a media fantasy and to act would be bulls**t. 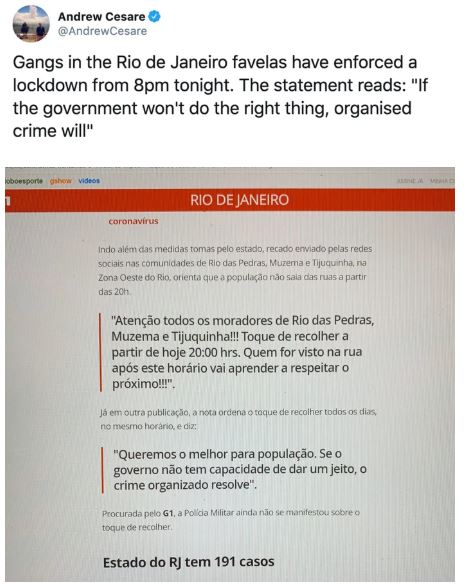 And that latter point is where Brazil comes in. Despite the fact that people there are f**ken bricking it just as much as everyone else is, their President, Jair Bolsonaro, has gone on the record to say:

“A small number of state and municipal authorities must abandon their scorched-earth ideas: the banning of public transport, the closing of commerce and mass confinement.

What is happening around the world has shown that the at-risk group are those over 60 years old. So why close schools? 90 per cent of us will show no sign [of infection] if we are infected.”

So, yeah, f**k old people we guess. Apparently, Bolsonaro has even claimed that although he’s old, he won’t get sick because he’s an “athlete.”

Anyway, there’s f**ken plenty of bats**t crazy coming out of his mouth, and you should definitely give him a Google, but this post’s about the Brazilian gangs who’ve stepped up to ensure lockdowns are observed and people aren’t f**king about and putting others at risk. 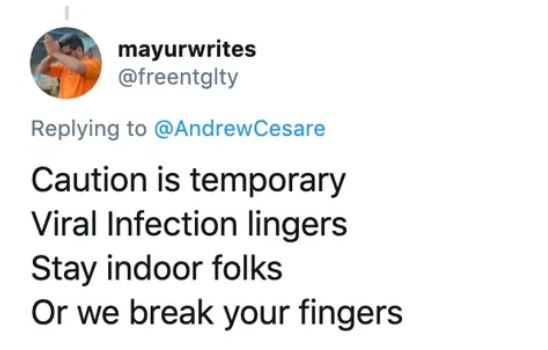 From what we’ve read, they released a statement, claiming that if the Government won’t act ‘organised crime’ will. Apparently, they’re even threatening to teach people to ‘respect’ an 8pm shutdown.

As you can imagine, the internet’s loving it.

Final thought: Look, we’re not gonna go down that train of logic that suggests gangs and governments aren’t too dissimilar from each other, but in this instance, you’ve gotta respect their decision to act out – even if it doesn’t necessarily come from altruistic reasons. Let us know what you reckon about this in the Facebook comments.

Just in case you missed it, here’s one of Ozzy’s latest commentary videos…Ozzy Man Reviews: Coronavirus