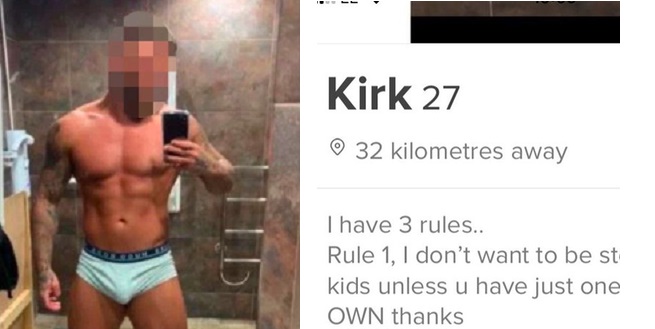 Bodybuilder sparks outrage with his “three rules” in Tinder bio

Pat Benatar was not bloody wrong when she said ‘Love is a Battlefield’. Social media and the internet has opened up the world, bringing us all ‘closer’ and lettin’ us cast the net a little wider to hopefully catch a half decent fish. Online dating lets ya meet blokes and sheila’s that ya may not have crossed paths with otherwise. No doubt the chance of meetin’ ya soulmate has increased due to technology, but it’s also opened the floodgates for tools and weirdos to slide into ya DM’s.

So how do ya figure out which fish to reel in and which one’s to let go? I reckon it’s generally pretty hard to figure it out, but some times the warning signs stick out like dogs balls.

This was the case recently when a bird named Zoe posted screen shots of a blokes Tinder profile to Twitter. 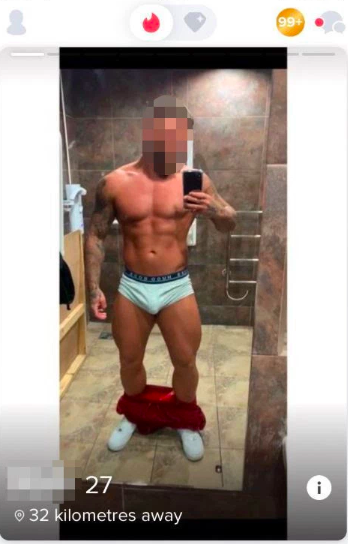 The profile pic of 27 year old mystery Casanova seems to have been taken shortly after he’s had a dump and he’s not had a chance to pull up his trackie dacks. That’s a bit f**ken awkward isn’t it?

Along with the pic she said:

“I thought I’d give Tinder a go but honestly, it’s fully put me off dating.”

The questionable choice of profile pic would be enough to have me running for the bloody hills, but Casanova’s got another couple of red flags to wave before ya make up ya mind. He’s got rules. Three of them in fact. 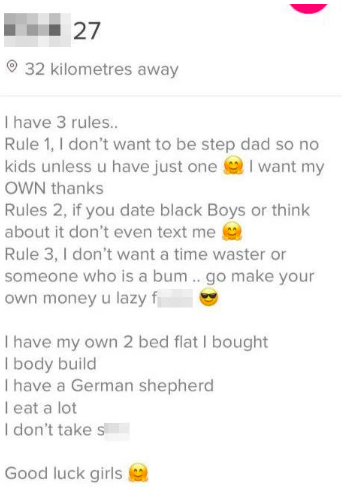 Rule 1, I don’t want to be step dad so no kids unless u have just one, I want my OWN thanks.

Rule 2, if you date black boys or think about it don’t even text me. 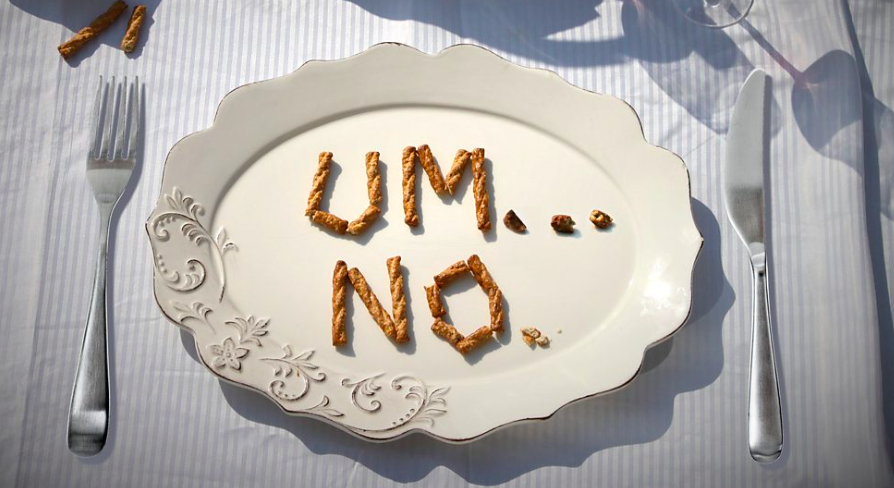 Reckon tons of sheila’s were thinking the same bloody thing. Zoe’s post has been liked by over 26,000 people and been retweeted about 2500 times showing the “Sisterhood of Surviving Douche Bags” is alive and well.

Twitter was pumpin’ with comments hopin’ to give this bloke a much needed reality check:

He is a narcissistic, racist, misogynistic, delusional muscle head.

I’m going to screen shot this for when my relatives ask me why I’m still single.

Wow. What a catch! Maybe drop the rules instead of the pants.

I’m so glad I’m married and don’t have to date, because I’d be single forever,

Final thoughts: I can remember me Nan saying that “when people show you who they are, BELIEVE them.” In the dating world I reckon that makes a ton of sense. Like if some moron is making racist comments or jokes, they are a f**ken racist. And if some d**k won’t stop talking about themselves, they might be a narcissist. Or a bloke that’s talking s**t about heaps of women? He could potentially be a misogynist flog. So lets all keep an eye out for those bloody red flags alright? Stay safe out the mates; and thanks Nan, you’re a deadset legend.