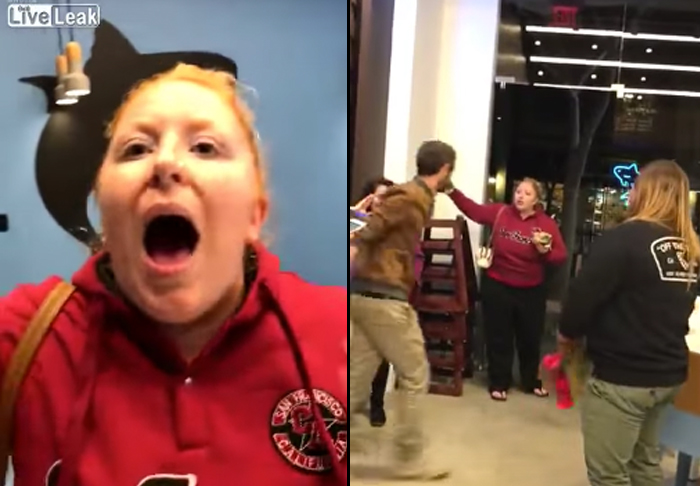 Woman Loses Her Shit In Restaurant About Public Display Of Affection

So you think kissing your girlfriend on the forehead in a restaurant would be ok? THINK AGAIN FUCKERS.

The sheila in this video COULD NOT EVEN HANDLE a kiss. When viewing a public display of affection some people choose to ignore it, some don’t care, but others (likely a small percentage) just fucken snap. This is the snap. Big time. First of all she witnesses a forehead kiss and feels sexually repressed. She is probably already sexually repressed without the kiss, but now everyone knows. She claims that you can’t do that in public (they aren’t).

The thing about these people is you cannot fight back, because what you do to them is apparently a thousand times worse than what they think they have the freedom to dish out.

The women accused says that she is a heinous person. Bold move. Now the woman is calling her a prostitute, a slut, a bitch, and tells her to leave. After being reminded she is being filmed, she says she will call the police because prostitution is illegal. It was a fucken kiss!

She isn’t done there though. After getting in the guys face (the one who is filming, who did the kissing), he tells her to back up, and tells the dude working in the store to call the cops. The cranky sheila always seems to have another level of shit up her sleeve, so now she claims the two were having sex in the restaurant. After a few moments of stunned silence, she is now claiming that she is being sexually harassed (anyone’s guess how).

She gets told to politely leave, so she picks up her food and starts going to the exit. However, the next card is then played. “I want my money back. I want a refund. I want to speak to your manager.” Here we go. She reckons she can get the employee of the store fired for allowing the kissing to occur. Of course he doesn’t budge when asked for a refund. She turns her attention back to the couple and while hurling non stop insults at the women accused, she says she wants to puke on ’em both. Lovely. Lovely to imagine from a stranger. They tell her to leave, but she can’t leave without takin’ it up another notch. Now apparently the guy is stalking her! She wants to file sexual harassment and stalking charges against the guy.

The manager finally comes out and tells her to leave. She looks him up and down, see that he looks a bit foreign and plays her final card. “I’m an American! I’m from California! Go back to wherever you’re from!” Turns out she is racist too. The groans from the rest of the crowd by that point is a thing of beauty. She then pretends to call the police, tells everyone that the police are coming to arrest the couple, then walks out.

What a nice woman. Yeah nah.