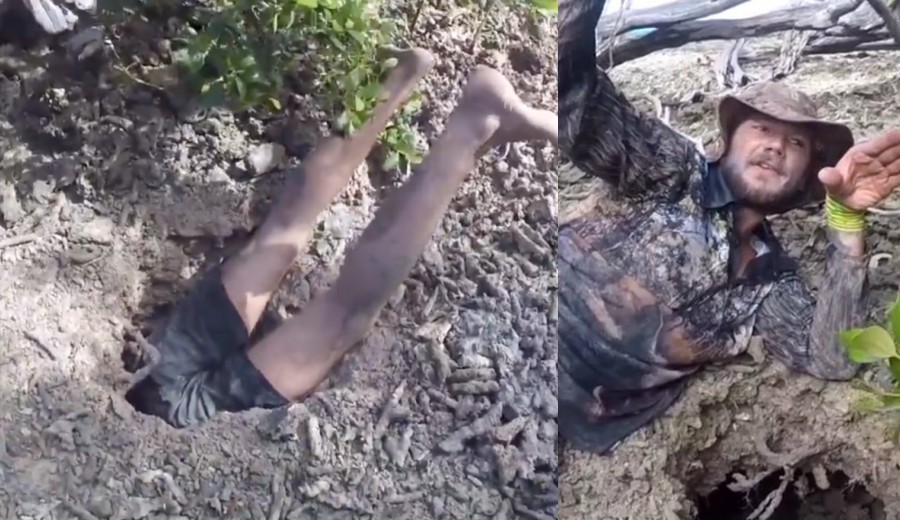 When people think of farming in Australia, the first animals that come to mind are cattle, sheep and chooks but there are plenty of other species that are farmed too: camels as a good example of a booming industry in the land down under, as are mud crab farming.

It’s a bloody intense operation but is also highly lucrative due to the fact that crab meat is always in high demand and it fetches a pretty penny on the seafood market.

There are two types of mud crabs in Australia: green mud crabs and red claws and both are found in estuaries, backwaters and coastal areas.

And now, Queensland wildlife enthusiast Beau Greaves has made a video to show just what it takes to snare a wild mud crab and it’s fu*king awesome!

The clip, posted to his Facebook page Beau Greaves: A Wild Life, shows just how deep these gargantuan crabs burrow into the mud and in order to retrieve the beast, this madman climbs into the hole and ends up more than half his body submerged underground. He even asks his buddy to help pull him out of the hole by the legs but when he emerges, Greaves has got the biggest bloody mud crab you’re ever seen. In order to give it some perspective, he gets his buddy/cameraman to put his hand up against the back of the crab.

In a Facebook post, Beau says: “Another solid muddy up in the holes using my decoy stick, tried to explain it a little bit how to get them out.”

It’s not all smooth sailing, however: Greaves explained that he’s “Been bitten twice, nearly lost a finger and been close to having my wrist crushed, but I guess the more you do it the better you get at it.

“Few little tricks help, the big part is where to look for them! Maybe one day I’ll get the time and make a little video. Good fun, get out there and give it a go. It’s illegal to use a crab hook in QLD, I guess if you can get one out like this you earned the feed.”

Beau’s Facebook page is littered with fu*king epic pics and videos. Someone needs to give this lad a TV show, immediately! Beau and his mate… Australia is known for being home to some fu*kin scary animals, such as snakes, spiders, crocs, sharks, and highly toxic jellyfish. There are plenty of other beasts that fly under the radar but thanks to legends like Beau Greaves, we are seeing more and more of them in their natural habitat.

CHECK THIS FELLA OUT: