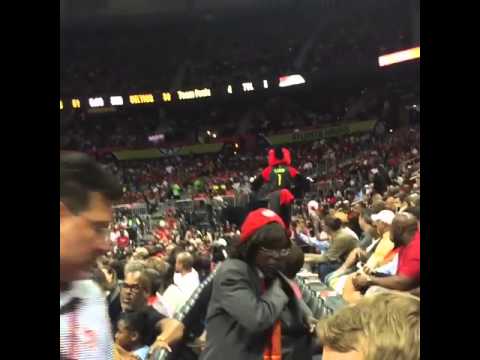 Atlanta Hawks Mascot Crushes His Nuts On A Rail

When a bloke hurts his ballsack it’s no laughing matter…

We all say that, but gee whiz it’s funny as fuck.

We have two different camera angles available to us at the moment.

We have what was shown on TV in which you’ll catch a glimpse of the fella poling himself at the bottom of the screen. And then there is a crowd version that someone shot on their phone. Bloody hell I love the internet.

Below is professional camera angle one.

Keep an eye on the bottom of the screen to see the incident:

Fuck sake. It’s so childish and simple and I won’t deny I can’t stop laughing at that footage. The TV show “Ow! My Balls!” from the movie Idiocracy should become a reality already.

The bloke would be regretting that decision to the max.

Why did he even attempt such a daring jump? Surely his vision is impaired by the bulbous hawk head? Was there a sheila nearby he wanted to impress?

I hope he has a speedy recovery and a good support structure around him at the Atlanta Hawks. He’s gonna have a rough couple of days nursing the family jewels.