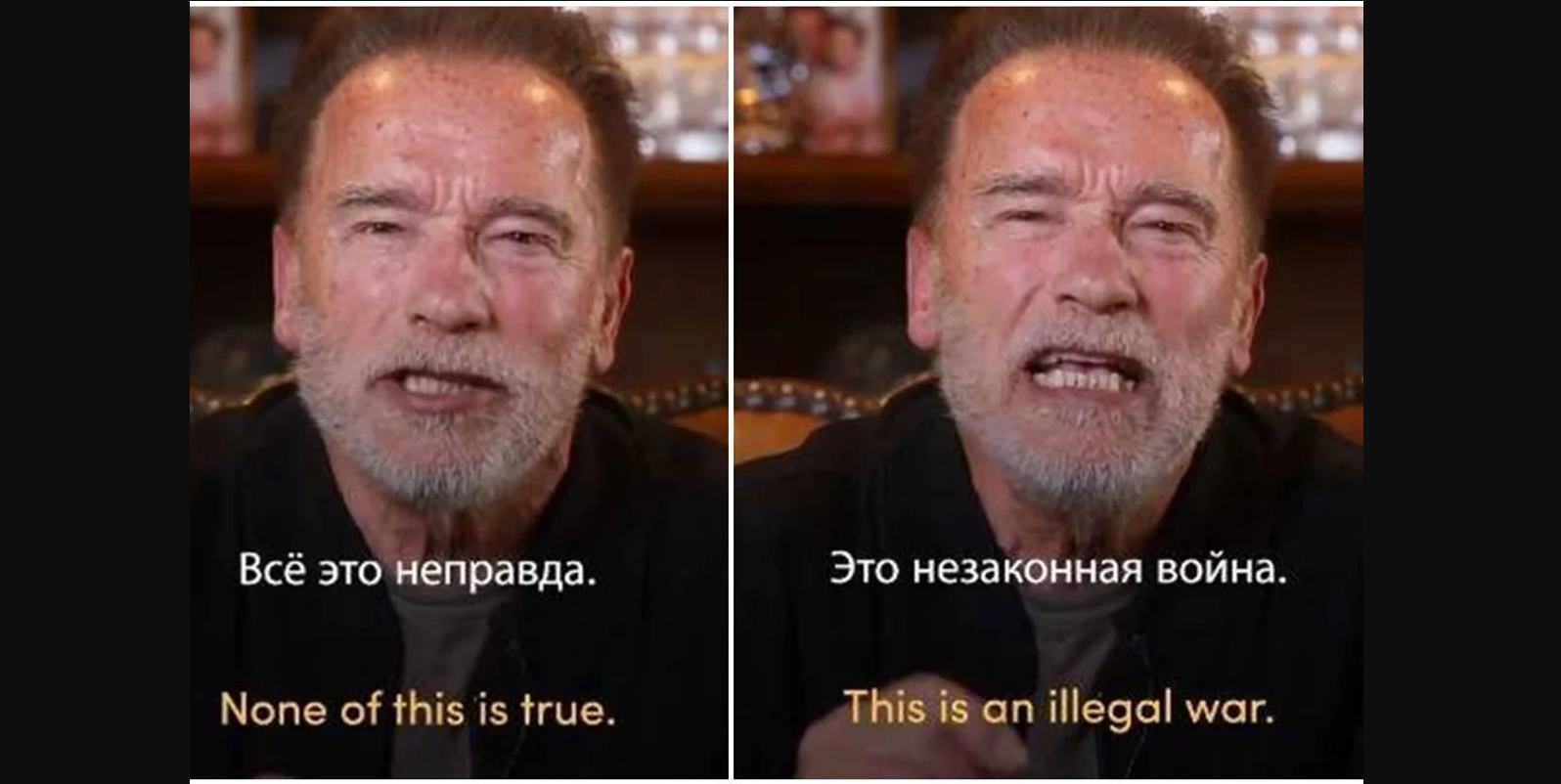 From f**ken Commando to The Last Action Hero, the bloody Governator, Arnold Schwarzenegger, has always known how to tell the bad guys to f**k right off and to cut their bulls**t. Now, with Russia making it feel like the end of days might not be too far away, he’s at it again. Yeah, nah, f**ken Arnie knows that any modern-day war is only gonna bring us closer to Judgment Day, and in a video that’s gone viral on Russian social media, he’s saying yeah, nah, Russia, f**ken Putin’s lying to ya…

Ok, so yeah, when we first saw that Arnie had decided to send a message to the Russian people, we were f**ken interested. It seems, though, that even if it hasn’t had an immediate effect, it’s inspired some of the country’s anti-war civilians to talk. Considering he’s one of only twenty-two accounts the Russian government’s official Twitter channel follows, there’s probably a reason for that.

I love the Russian people. That is why I have to tell you the truth. Please watch and share. pic.twitter.com/6gyVRhgpFV

Basically, when it comes to the invasion of Ukraine, Putin has insisted that his media presents it to his people as a ‘special operation’ designed to protect the Russian-speaking people of Ukraine.

Arnold’s video, though, which went live on Twitter, YouTube, and other social media sites, is pretty f**ken straightforward. In it, he addresses Putin directly, and says, “You started this war, and you can stop it.”

Here is the text of the video: https://t.co/lvNEDmb2NJ

Additionally, he goes to great pains to present the video as one that’s friendly towards the Russian people and one that’s designed to help them. He opens by saying, “I’m speaking to you today because there are things that are going on in the world that are being kept from you—terrible things that you should know about…”

From there, he shares a quick story about his Russian mate and he explains his deep connection with the Russian people before saying, “No one likes to hear something critical of their government. I understand that. But, as a long-time friend of the Russian people, I hope that you will hear what I have to say.”

The official Twitter account for the president of Russia follows 22 others — and one of them is Arnold Schwarzenegger, who in a video posted on Thursday debunked Russian disinformation about the war on Ukraine and urged Putin to end the conflict.https://t.co/O1kTCsoenr

He then continues by explaining some of the myths presented by Putin – particularly that Ukraine is being ‘denazified’ and says, “You see, there are moments like this that are so wrong, and then we have to speak up…It is a humanitarian crisis. Because of its brutality, Russia is now isolated from the society of nations.”

He finishes by calling the Russian to spread the word about this. “I urge the Russian people and the Russian soldiers in Ukraine to understand the propaganda and the disinformation that you are being told. I ask you to help me spread the truth. Let your fellow Russians know the human catastrophe that is happening in Ukraine.”

Of course, saying all this is one thing, but the reaction over the weekend has been interesting to say the least. Many anti-war Russians have shared the s**t out of it, and his speech has been praised by anti-war commentators.

Final thought: Obviously, this is only one example of things people are trying to do to bring peace to Ukraine, but bloody Arnie holds a special place in everyone’s hearts. If he can’t get people listening, then we’re pretty sure no one can. What do you reckon?

Just in case you missed it, here’s one of Ozzy’s latest commentary videos…Ozzy Man Reviews: Evil Bridge OR Dumb A** Drivers!?