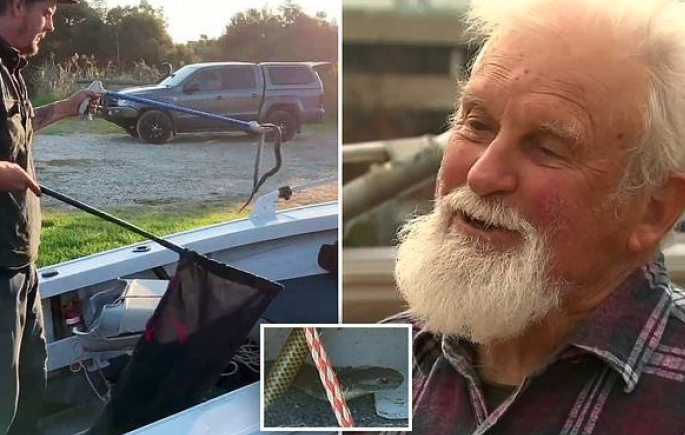 We’re pretty well-known for our snakes here in Ozzy Land, and as plenty will tell you, when it comes to the most venomous snakes in the world, we’ve got our fair share. Up near the top of that list is the bloody tiger snake. Named for its striking patterning, this cheeky little bigger is just as much at home in water as it is on land, and that means that nowhere’s safe from its incursions—not even your tinnie. Just ask Victorian fisherman Bob Thatcher…

When you do, just be aware that Bob’s a classic gentleman and he’s not gonna repeat exactly what he said to the snake when he tells the story. Instead, he tones it down and still keeps the gist of it there for us. “I didn’t like the bugger – that’s all I’ll say,” he said on Monday. Yeah, nah, nah, we get his drift.

This arvo we had a rather interesting call. Dean rang to say his elderly father was in Lake Wellington in his tinny and…

Anyway, the big bloody legend had just dropped his tinnie into Lake Wellington when he noticed that he had a passenger on-board. “I could see this strange object I didn’t recognise. It was about 30cm from my feet, flicking its tongue out,” Thatcher explained to Guardian Australia.

He went on to explain that while he thought of jumping into the drink, he knew it wouldn’t solve the problem. “There’s no way out and you only have 6ft by 4ft. It’s an uncomfortable situation.”

Instead, he got on the blower to his son and had him find a snake catcher, organising a meet-up at the boat-ramp. Baden Peter of Gippsland Snake Catchers met Bob and gave his reptile a solid wrangling.

“It had gone down into this little hole where his fuel tank is and it would poke his head out every 20 minutes or so,” Peter said. “We think it might have been swimming and it thought Bob’s boat was dry land – that’s the idea I’m leaning towards.”

In all, Bob spent thirty minutes alone on the boat with the snake, even throwing his jumper on it to stop it slithering around, and Prof Geoffrey Isbister, snake venom expert and founder of the Australian Snakebite Project at the University of Newcastle reckons Bob was lucky.

“It’s one of our most venomous snakes. It’s certainly life-threatening and we have had deaths on the east of Australia from tiger snakes seen in the past five years,” he said.

Fortunately, it seems that this snake just fancied a bit of a rest on the tinnie. And who can blame it. It saw Bob enjoying the glorious spot and knew it had to have a bit of the action. Smart move, really.

Final thought: Yeah, nah, this is undoubtedly one that’d make more than a few people s**t their britches. Thankfully, Bob and the snake didn’t come to blows and everyone got to go their separate ways. Good s**t, Bob. Good s**t, snake. You’re both tops in our books!