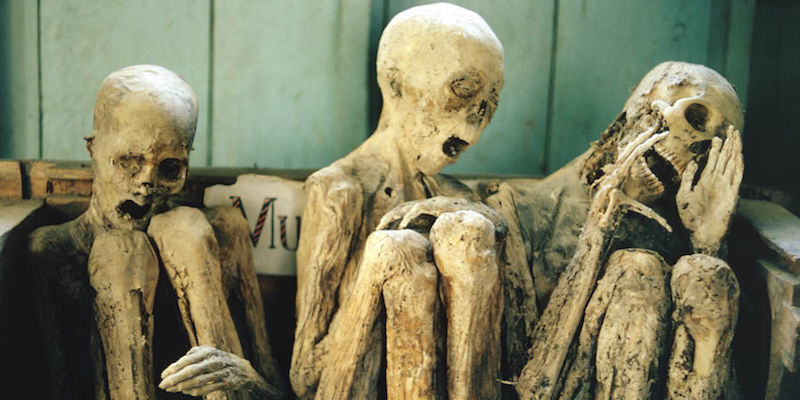 A British museum that specialises in weird and wonderful items has unveiled its strangest display yet: a seven-inch mummified erection!

The Viktor Wynd Museum of Curiosities, Fine Art & Natural History has rented the willy at a cost of £2,500 ($3,255 USD) for a year and it will be on display alongside a number of other unusual exhibits, such as:

-An eight-legged lamb recovered from Fukushima
-Ancient Chinese sex toys
-Russell Crowe’s p*ss
-The skull of a cyclops
-The pubes of Russell Brand
-Numerous mummified animals, some dodo bones, and feathers from extinct birds
-A jar of the late singer Amy Winehouse’s sh*t

They’re some pretty crazy things to have on display but I reckon the mummified boner takes the biscuit. Viktor Wynd, the museum’s curator, said that the rare piece belonged to an 18th Century Englishman who happened to crack one at the exact moment that he was hanged. “It was removed from an 18th century Englishman who was hanged. When people were hanged they’d nearly always get erections and nearly always release their seed’, Wynd said. “I think quite a few were made but this is the only one I’ve heard of.”

“It’s been around in different private collections and Oscar Wilde was an admirer”, he said. Wilde for the mummified dick

The eccentric curator used money from a crowdfunding campaign that he started to buy a Peruvian mummy in order to rent the bizarre piece. Originally Mr Wynd planned to buy a mummified head from Peru for £5,000 but his crowdfunding efforts fell short so decided to rent the dick for a year instead.

He explained that mummified body parts were believed to have magical properties in some ancient cultures.

“Body parts were frequent perquisites of executioners and many different parts were supposed to have magical properties,” Mr Wynd said. “For example, there is something called the ‘Hands of Glory’ – which is the mummified hands of hanged men which were believed to be extremely powerful.” For a number of years, the strange object has been in a private collection before ending up at the museum. The schlong has not been verified by an independent historian, however. What’s that? You want an extreme close up? Well, ask and you shall receive…