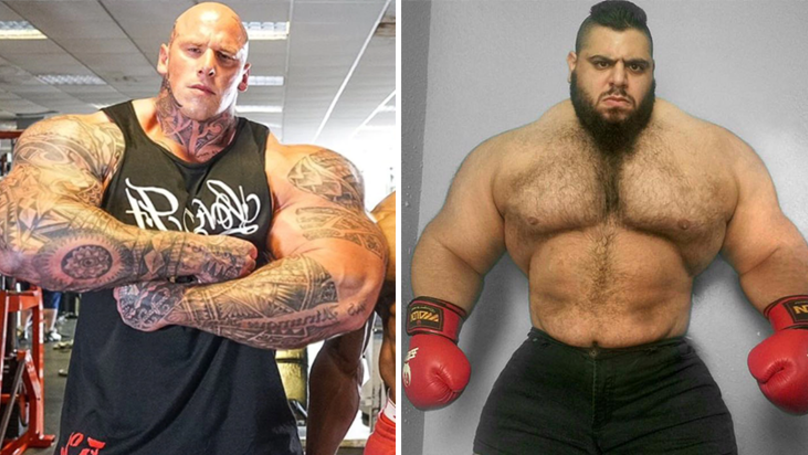 The f**ken limits of MMA keep on rising and now we are set to witness two legendary monstrosities battle it out in the octagon. There’s nothing like a couple of bloody fellas trying to prove their masculinity and, in this case, what better way than an MMA fight!? Both blokes have certain name-tags that should not be overlooked… Scariest Man In The World and the Iranian Man Mountain. Pretty fearsome nicknames if you ask me. Let’s take a look at this fight and break down both competitors.

This top bloke is a 6″1 XL condom stuffed with rocks, weighing in at a f**king ridiculous 178 kilograms. The Iranian Hulk has vowed to take on ISIS with his incredible stature. The Iranian Man Mountain has a substantial Instagram fan-base reaching over 400k. He has had experience in wrestling which could be handy for the fight. Yeah nah I wouldn’t mess him. In fact, it’s worth asking him to be on the Ozzy Man Apocalyptic Survival Team when the day comes I reckon.

Competitor 2: The Scariest Man in The World

A 6″8 torqued ropy hulking thesaurus that weighs in a ripping amount of 148 kilograms. Old mate started off wanting to play cricket professionally (hopefully he wouldn’t do any ball tampering) until he become a f**ken monster bodybuilder. F**k me that’s a bit of a change of direction if you ask me.

The Scariest Man in The World has been training for months now, and is signed up with a polish MMA organisation Konfrontacja Sztuk Walki (KSW).

Final thought: I can’t wait to see these two top dickheads set to take it to the cage and bash the living crap out of each other. I think the winner will be the bloody crowd who get to experience a rip snorter of an event. Overall I just want to see an Ozzy Man Reviews commentary on this fight!!!