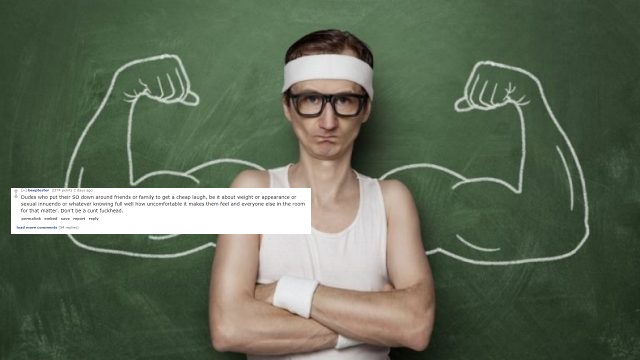 What does it mean to be a man?  From the bloody great writers of the past like Hemingway and Steinbeck to modern movies (and novels) like Fight Club and from the plethora of internet sites like The Good Men Project and The Art of Manliness to more traditional magazines like GQ, these ideas of masculinity are often discussed, but it seems no one ever really thinks to ask real blokes.  You know, the ones on Reddit…

A recent Reddit thread asking what makes guys lose respect for other men is surprisingly reaffirming of the fact that most dudes are actually good dudes and f**k-knuckles are widely frowned upon.  It’s actually a pretty good question to help foster a picture of what a ‘man’ should be.  After all, we can’t only rely on bloody tradition for this can we?  The idea has to be reflective of society’s general attitudes, values and beliefs. (High school English anyone?).

If this Reddit thread is anything to go by – and why shouldn’t it be?  It has to hold as much value as what some random blogger, journo or even author or film director has to say, if not more, simply because of the weight of responses involved – what makes a man is faithfulness, family values, gentlemanly conduct, modesty, wisdom and generosity.  F*** YES, Internet, F*** YES!!!

The fact that guys highlighted the lack of these qualities in other blokes they’d lost respect for puts a big smile on this face.  These days, it seems like guys are an easy target for the vocal minority of the ‘politically correct’ movement that has become just as fascist as the pricks they claim to be fighting against.

Now, I’m not saying there aren’t things we shouldn’t question about masculinity and there aren’t dudes who are total jerk-offs, but it often seems like one brush tars everyone the same and I think threads like this – from real blokes talking about what makes them lose respect for other blokes – are infinitely valuable.

And guys like this can eat a dick. (And hopefully will when they get to prison). Credit: Reddit/danieljay691

Real men don’t have time for braggarts and misogynists, we don’t think cheating on or failing to treat your missus like a princess is cool, we value the sh** out of family, we help those in need and we learn from mistakes and new experiences.

These dudes should all be put on an Island where they can fight each other to the death. Credit: Reddit/RosyGlow

There are loads more of these to read right here.