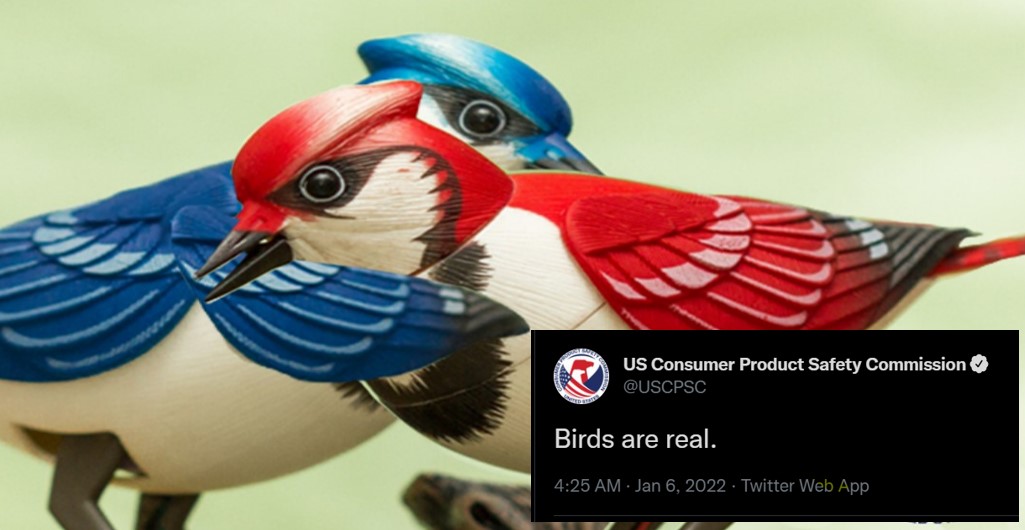 There’s no doubt that fake news and government spin has done a lot to foster doubt in the authorities over the years. In the US, this s**t is a big problem right now. We’re not sure what big orange reason there is for this, but it seems to be a real problem. Which brings us to birds. Yeah, nah, as we’ve reported in the past, some people just don’t think birds are real. Fortunately, one US Agency has moved to alleviate those fears…

Before we get into the crux of this story, we get it. When you think about birds being animals that can fly, that can sing, that can mimic, and that lay eggs instead of having babies, there’s a lot going against them in the great game of truth or bulls**t and that’s probably why some people think they’re drones.

Obviously, they’re not, but people will believe all sorts of crazy s**t if you let them. You know, stuff like the earth is flat, Australia doesn’t exist, Covid is fake, and the vaccine contains microchips. Fortunately, most people are able to poke fun at this kinda nonsense, and that’s exactly what the US Consumer Product Safety Commission has done with an online campaign designed to raise awareness of its new website.

We’re not going to s**t you, tackling the whole ‘birds are fake’ conspiracy theory isn’t the only strange choice they’ve made in this campaign, but the end result is still a heart-warming bit of fun in an age when so much online content is heavy, angry, or blatantly false.

So yeah, have a squiz at the Twitter thread they’ve created and let us know what you think.

Thank you for coming. This has been a government PSA about a government website called https://t.co/qFWdMF6Xk0

Final thought: Not everyone is down with a bit of pop-culture allusion in their marketing, but we like it. We reckon there’s some relevance there, and we also reckon this is a fun and quirky way to get people to engage with an otherwise dry message. Yeah, nah, we dig it. What about you?