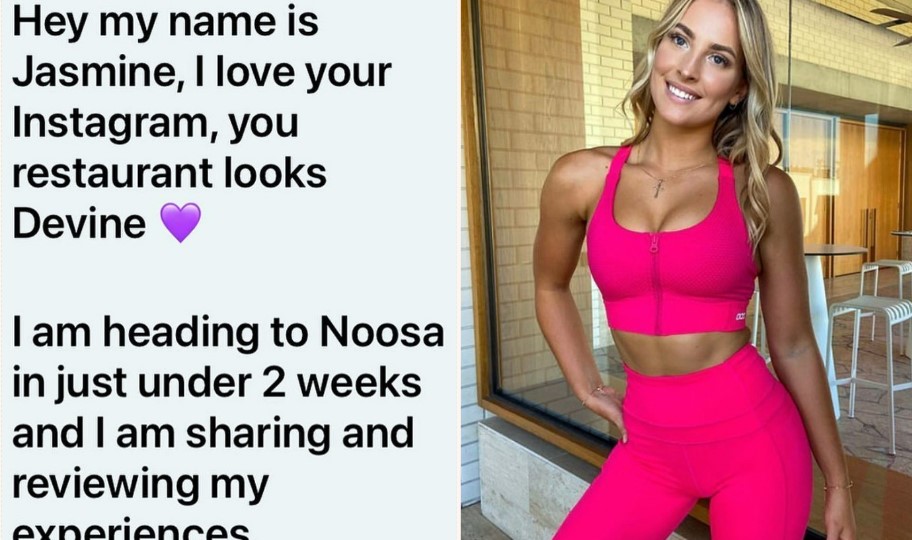 ‘Influencer’ shamed for asking for free food from Noosa restaurants!

Every now and then, we come across stories about ‘influencers’ or as we sometimes, when the shoe fits, like to call them ‘insta-wankers’ trying to score free food in exchange for a social media post. Now, we’ll be honest, we don’t really have a problem with this when its solicited or justifiable. Advertising and ‘contra’ deals are a big part of marketing with radio stations, televisions, reviewers, etc, but not everyone’s a fan, particularly when the offer comes in unexpectedly…

All right, so yeah, look, this post isn’t necessarily about bashing people who offer a fair service in exchange for a meal. Don’t get us wrong, reviews in entertainment circles and the media are often built around a free exchange of services and airtime.

When that happens, though, there’s usually a discernible benefit, and quite often, it’s driven by the company looking for advertising exposure, and that’s probably where some influencers are getting it wrong.

In this instance, we’re looking at Aussie ‘influencer’ Jasmine Rollason. This sheila’s just been publicly shamed for hitting up a Noosa restaurant for a free feed. Rollason has some 36,000 followers and calls herself a fitness, fashion, and travel blogger. 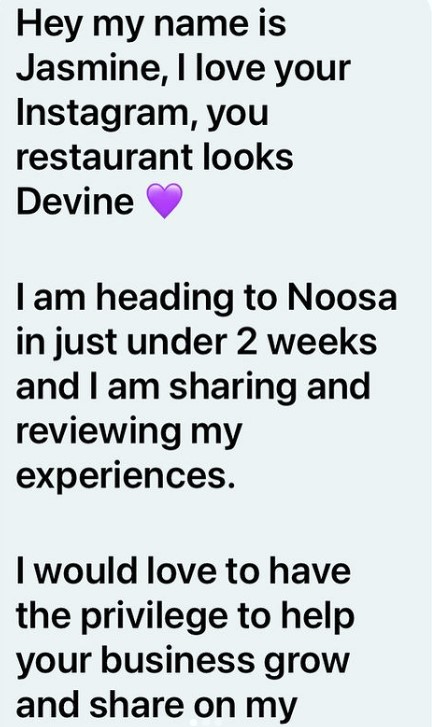 A screenshot of a message she sent to the venue has gone viral, and it’s got people talking. In it, she says, “My name is Jasmine, I love your Instagram, you restaurant looks Devine. I am heading to Noosa in just under 2 weeks and I am sharing my reviewing experiences.”

She also added, “I love creating content for brands and I would be more then [sic] happy to supply your company images you can share on your channels that are aligned with your current feed aesthetic or values.” 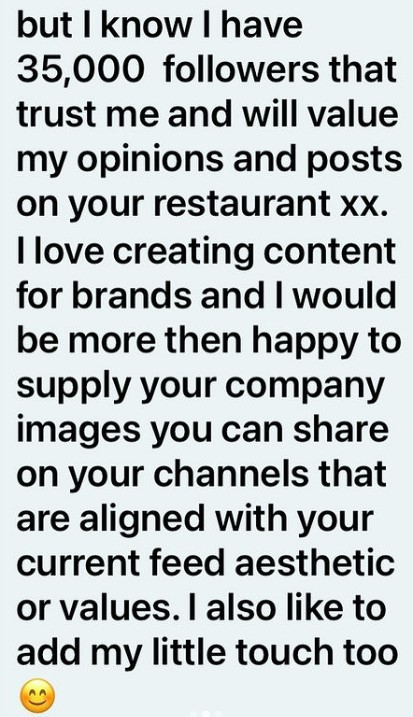 Naturally, some people weren’t happy, claiming that Jasmine was freeloading, but what is interesting is that point we made before. Historically, restaurants and venues have a lot of form for offering free food to critics and reviewers. This, however, was sought out, usually by the venue, and published in more traditional media. Is this what influencers are getting wrong?

Another interesting point is that the messages were sent viral by Aussie food critic and writer, John Lethlean. This guy writes for the Australian, a traditional publisher – and one who has a vested interest in keeping itself at the forefront of restaurant’s minds, because let’s face it, those restaurants are potential advertising clients. 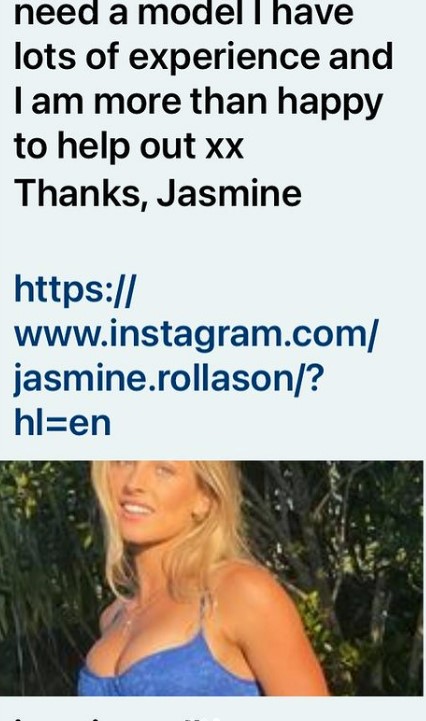 We’re not going to suggest for a second that an ‘Influencer’ has the pull of Lethlean when it comes to critiquing food. After all, even if she does have more Instagram followers than he does, she doesn’t have the qualifications or publications under her belt to match him in that field.

What we will say, though, is that there are things to consider here. There are probably lessons too. So yeah, when the media bashes ‘influencers’ for trying to gain free food or tickets or whatever, remember that they’re in competition with each other and that traditional newspapers are in big trouble in this day and age.

More importantly, though, it’s probably worth remembering that unsolicited influencers just reaching out for a free feed kind of rubs people up the wrong way.

Final thought: So yeah, what are your thoughts on this? Is Jasmine in the wrong? Is there a place for Influencers in advertising? Has anyone tested and measured their impacts, or is it just fun to bash them for being scabs when they’re only trying to make a living for themselves? Let us know.

By Chuck Steinway 54 mins ago

By Chuck Steinway 59 mins ago