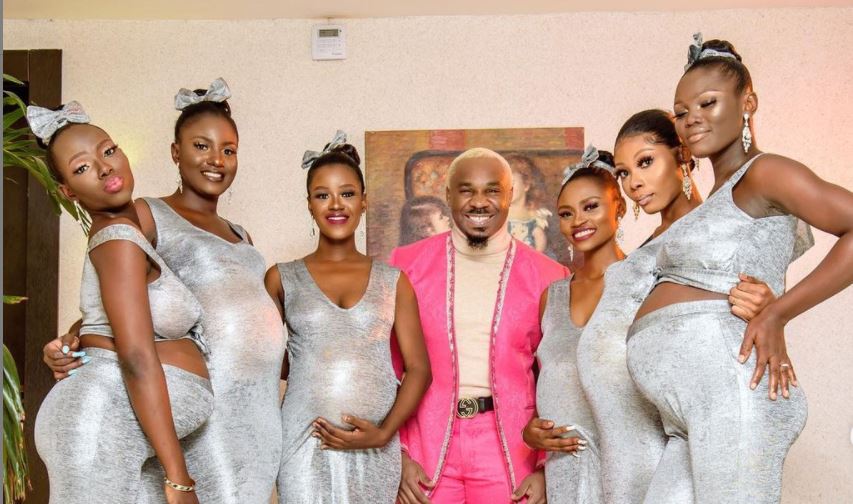 Mate, if you’ve ever heard of someone being called a glutton for punishment, you’re gonna have a whole new context for it after this story. Yeah, nah, the bloke in this story just f**ken loves putting himself through a rigmarole, because if his claims are to be believed, he’s gone and knocked up six sheilas at once. Yeah, f**ken six. Check it out…

The bloke in question is Nigerian Instawanker, Pretty Mike. Mike’s got about 300,000 followers on his Insta, and he’s pretty well-known for pulling stunts at other people’s weddings. This time, he’s rocked up to a wedding with six pregnant sheilas, and apparently, he’s done all the impregnating himself.

Don’t get us wrong, that’s a f**ken solid effort, but we don’t reckon he’s thought this one through. One bloody baby is hard enough work. Imagine having six eating, sleeping, s**tting, screaming infants in your house at once.

Yeah, nah, f**k nah. Anyway, Pretty Mike isn’t thinking that far ahead, and he’s loving life. After posting photos of six pregnant sheilas in matching outfits, he captioned the images with, “PM and his six Baby Mothers to be. No film trick, we are just living our best life.”

As you might imagine, some people are calling bulls**t, but really, what does it matter? Even if the bloke isn’t responsible for it, he’s not really in a lose-lose situation.

Still, in the past he has said that he wanted five wives, so maybe he’s just upgraded his goals and opted for a sixth. Whatever floats your boat, right?

Final thought: Farken hell, this is an interesting one. Obviously, there are questions around the legitimacy of things, but could you f**ken imagine having six kids to six women at the same time. We don’t know about you, but that sounds like the kind of thing that might drive you to go and get a late night packet of smokes.

We all know that pretty much anything released about celebrities, personalities and ‘influencers’ that’s within their own ken to control is usually a load of Photoshopped and doctored bulls**t. It’s nothing new. Peopl...

The human body is a bloody cavalcade of interesting, amazing and gross all rolled into one. Of course, what you see as gross might be someone else’s grouse and vice-versa, but generally speaking, we can all be sure th...