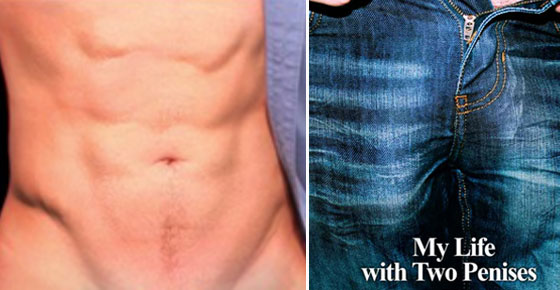 Bloke With Two Penises Answers The Question Everyone Wants To Know

We all know what it means to be as happy as a dog with two dicks, but imagine being a bloke who actually has two – count em, two – dicks.

And he’s taken to everyone’s favourite place, the internet, to answer a few questions about his blue-veined custard chucker and his beaver basher! Pixels. They actually are your friends. (Credit: Doubledickdude)

First up – it’s a condition called Diphallia and you can call him Doubledickdude.

One in five and a half-million blokes are born with this unfortunate condition, but it’s pretty rare to find a bloke with both of his meat snorkels fully functioning pieces of ladyware. 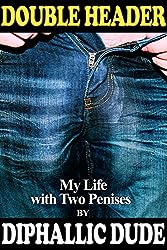 Those are cucumbers, right? (Credit: Amazon)

Doubledickdude has released a book called Double Header: My Life with Two Penises and shot to fame on the internet when he hosted an AMA session on Reddit.

Turns out his parents had the good graces to tell him, like you would any budding young kid with super-powers, to keep his gift a secret in case he made the other kids feel inferior or government agencies wanted to experiment on him.

In the way of so much young love that’s eventually spurned, the lady who stole both of his v-plates after riding his high-pressure vein cane and his love truncheon revealed his ‘terrible’ secret.

Apparently, the ladies either love it or hate it. Which doesn’t bother Doubledickdude. Apparently he has to spend a lot of time bashing the bishop AND choking the chicken because his prostate gets a lot of work. Or something like that. Seems legit.

On a sidenote, that has to be somewhat akin to milking a cow, right? I mean does he work one, then the other? Go both at the same time? Take it in turns? Who knows?

In regards to the popular and pressing question of how the fluids work with a double barrel… What we do know is that with only one muscle controlling urine and baby batter providing both the love gun and the sour cream rifle with ammunition, he has to pinch one off so it only comes out of a single barrel.

You’d keep the ladies guessing wouldn’t you? “Yeah, I promise I’ll tell you which one…” Chortle.

This house with over 1,000 nude pics inside has gone up for sale

Everyone knows that a blokes home is his castle. And you should be able to have it sorted in whatever way you see fit. Pool room? Sweet. Big ass shed in the back yard? No worries. Close to 1000 nudie pics all over...