Mate, if there’s one thing you can’t take away from mankind, it’s the fact that although we might have diversified into a beautiful and multifarious race of couch potatoes, vegans, vegetarians, gourmands, and opportunistic eaters of salty home-delivered takeaway food, we were once a race who had to get our sustenance from plain old hunting and gathering. That gene lives strong within many of you in the form of good old fishing. And while most blokes and blokettes who love to fish have a story about the one that got away, this bloke’s iron-willed determination NOT to let his prey escape is truly worthy of a bit of a squiz!

F**ken check it out. We’re having a bit of a fish on what looks like a nice little boat, and we’ve f**ken caught one. We’re not sure exactly what it is yet, but it feels like it’s got a bit of weight. Of course, our rod makes it easy to reel in. Seriously, listen to old mate waxing lyrical about his rod. He is bloody happy with it, that’s for sure.

Anyway, he’s just about got his fish landed when the slippery little f**ker spits out the hook. What a cheeky little sh*t he’s turned out to be. Doesn’t he know the missus has already got the potatoes chipped and ready to fry? Bloody hell, if we want something more than chip sangers for tea, we’re gonna need to catch the prick by hand. 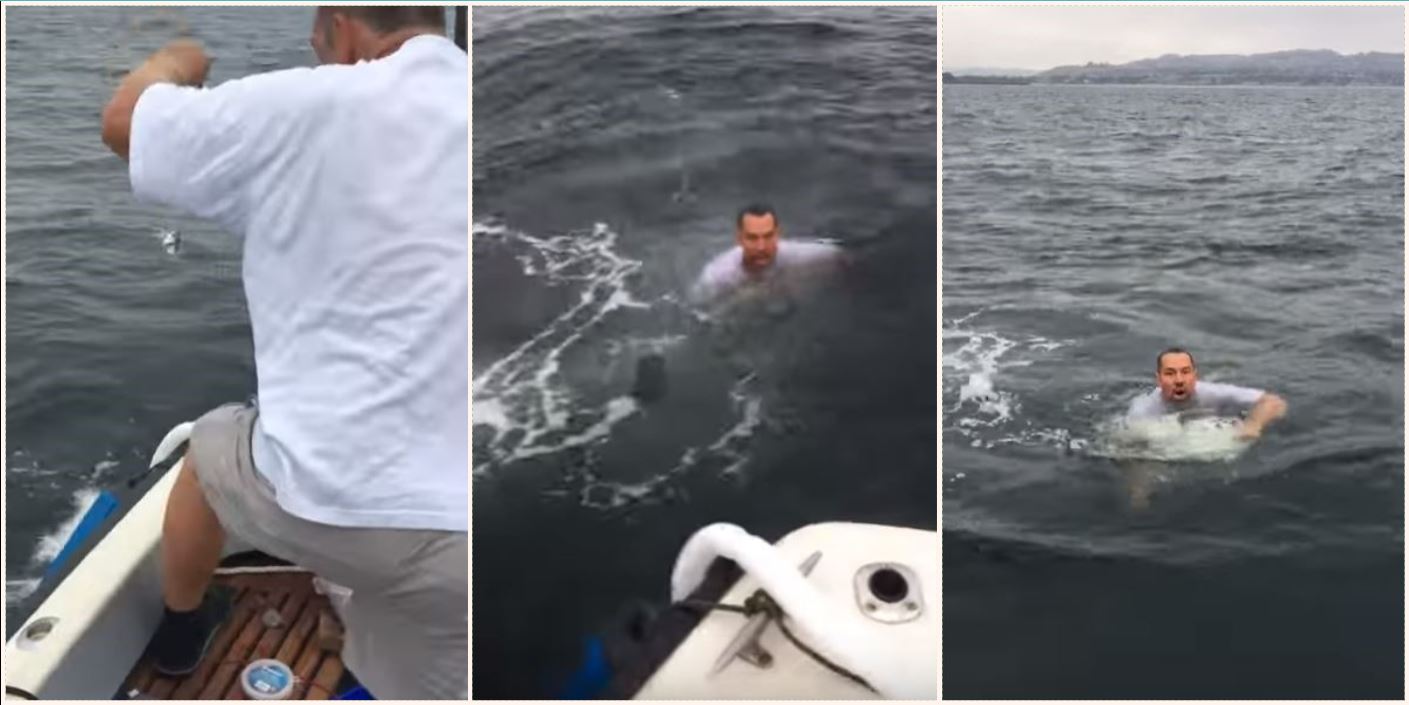 And that’s when the primordial hunting gene in this bloke f**ken grows a pair. That fish ain’t going anywhere. Old mate is over the boat and he latches onto that thing like a bear catching salmon. He f**ken launches himself like a graceful sea-eagle and ensnares it with arms like talons. “F**k you, fish!” he says. “Get in ma belly!”

From there, it’s actually pretty bloody impressive that he manages to swim back to the boat while the fish bites him. In fairness to the fish though, it looks pretty f**ked. I don’t think it’d be swimming too far even if old mate didn’t fetch it out of the water.

Final thought: You’ve gotta love seeing a bloke just refuse to be beaten when his dinner refuses to be eaten. When fate intervened and that fish gave his rod the slip, many others would have given up and consoled themselves with the fact it wasn’t meant to be. Not this hungry bugger though. For his determination, he gets a top bloke award. Good sh*t, mate. Good sh*t.