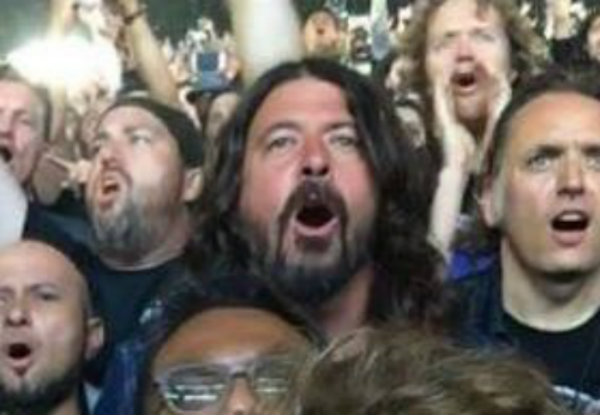 Dave Grohl Was Spotted Attending a Metallica Concert And He Didn’t Hold Back!

Nothing says rock and f***ing roll like Dave Grohl raising the horns in a Metallica moshpit!

Seriously! It just doesn’t get better than that.

Imagine it. One minute you’re pumping your f***ing fist and banging your head to the killer riff in Disposable Heroes and the next you realise the dude next to you in the pit is Dave Grohl. He was the subject of several selfies by some keen metal fans at the Rose Bowl in Pasadena.

F*** YES, Dave Grohl, f**k yes. The institution that beat the skins for Nirvana, formed the Foo Fighters, wrote the tunes for Tenacious D and even played on Queens of the Stone Age’s best album, Songs for the Deaf. 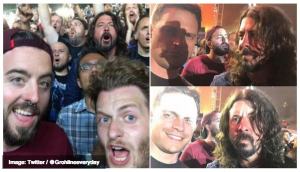 Dave Grohl. You. One Metallica pit. That is the thing that is almost too awesome to be! You’d totally be forgiven for thinking that kind of luck only happens on a day that never comes.

With only a few weeks to go until the release of his own new album, Grohl was caught enjoying one of Metallica’s recent gigs in support of their latest album Hardwired…to Self Destruct. I’m sure we’ve all been to gigs where we’ve seen dudes from other bands hanging out on the side of the stage, but it’s pretty rare to catch one of the dudes in the pit.

“One of lots of reasons to love Dave Grohl: Dave Grohl standing in the crowd at a Metallica concert, just like an ordinary dude,” tweeted one fan.

And that’s one of the key things about Grohl. Not only is he a bloody legend, he’s a real fan of metal music. Even though he only occasionally ventures into that territory with the Foo Fighters, he’s always embraced his love of metal.

As a fan he knows the ONLY place to catch Metallica tearing through their catalogue is from the pit. Whether you’re a fan of the new stuff, a fan of the old stuff, or a fan of the radio stuff, you have to give Grohl credit for that.

Not too proud to get amongst it, not too aloof to think he’s better than it. Top bloody bloke, Dave Grohl.

He posed for photos with fans, and stood true to his own words. In 2015 he told Creative Loafing he was “a diehard fan of Metallica until the day I die.”