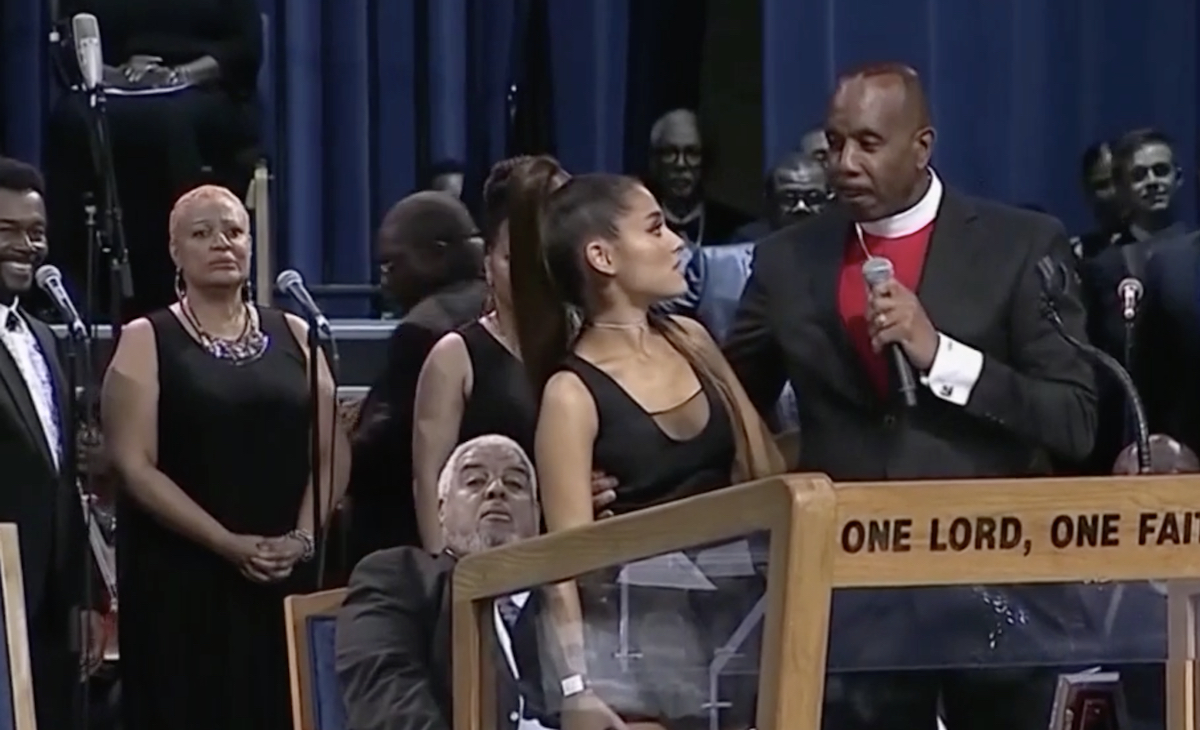 You might remember a while back when we talked about the dirty old git groping Mel B on live television, we figured out the only thing you could do was name and shame the b*stard in the hope it would stop their busy, busy hands. Well, you might have seen the news recently, because it’s bloody well happened again. Aretha Franklin, the Goddess of Soul Music, has officially carked it. And at her funeral, Bishop Charles H Ellis III got more than a little touchy-feely with songstress Ariana Grande.

Men really need to get their sh*t together pic.twitter.com/AEqr7aAi1m

Let’s start this off with a big old yeah, nah, what the f**k is this sh*t? We know that not all of you blokes and blokettes would have necessarily been to a church – or to a funeral – but both are places you wanna be on your best behaviour. One of the most literal phrases about funerals is people come to ‘pay their respects’. So the question is, just how are we supposed to make that happen when one of the main faces of an event is behaving in a way that’d make any decent mother ready to thong you one!

What was up with that pastors hand? pic.twitter.com/M8Ypgm7fQB

Obviously, this is 2018 and the internet exists, so there’s been more than a little outcry about this. As you’d expect, keyboard warriors everywhere have engaged caps lock and unleashed the f**ken fury. Once you get past the initial bouts of anger and outrage, there’s a real question there: what can we actually do about this sort of behaviour in such high-profile places and if it’s happening there, what the f**k goes on when there are no cameras around?

Since the event, Bishop Ellis has come out and apologised. He actually said, “It would never be my intention to touch any woman’s breast. … I don’t know I guess I put my arm around her. Maybe I crossed the border, maybe I was too friendly or familiar but again, I apologize.”

ONE LORD ONE FAITH ONE TWEET#RespectAriana
No woman deserves to be treated like this!!!!! pic.twitter.com/IF7KneDKE4

Far be it for us to outright say that sounds like bullsh*t, but we’re going to ask the question: does that sound like bullsh*t to you? It definitely sounds like something you’d say to get yourself out of trouble, that’s probably a fair f**ken call.

But, there’s an easy way to make your judgement on this one. All you have to do is watch the video. While you do, ask yourself how you’d respond if you were Bishop Ellis and Grande was busy looking like she’d been ensnared in your clutches while also trying to maintain a degree of dignity. More than that, ask yourself how you’d act if someone put your mother, daughter, sister, or missus in that position. It’s more than a little compromised, that’s for sure.

WAKE UP PEOPLE she looks so uncomfortable here and ya know what? He is so disgusting, he groped her many times and people still "it was an accident" omg those who say that can keep your opinion away bcs yall are toxic asf. Every woman deserves to be treated nicely #RespectAriana pic.twitter.com/40Hzepprsu

Anyway, hit up the Facebook comments with your thoughts. We had some interesting discussion on there last time. Let’s see if we can get it kicking again. Especially when you consider Aretha Franklin’s most famous song is literally about respect!

Can you IMAGINE the outcry from idiots currently saying “she should have said something” if Ariana HAD stopped & said “Bishop get your creepy hands off me & also don’t belittle my name you old perve” during a funeral? Predatory men rely on women not making a scene #RespectAriana

Final thought: This one seems to be a recurring thought rather than a final one these days: if you like someone and you want to get touchy-feely with them, you need to make sure you have their consent to go the grope. Even then, that sort of behaviour in a church or funeral is usually frowned upon. Come on, blokes, raise your game. Let’s look after our girls rather than treat them like objects.