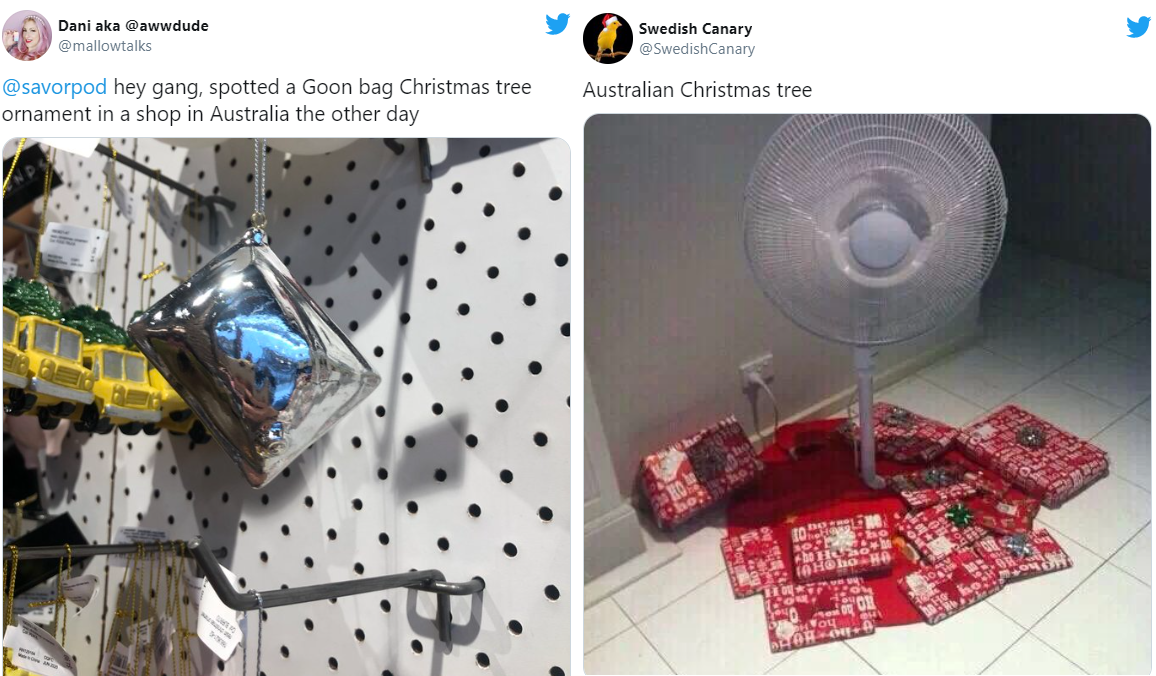 When you say Christmas, most people are gonna think of the traditional s**t: snow, snowmen, reindeer, Santa, fireplaces, Christmas trees, and presents. A few people will think of the baby in the manger, the three wise-men and the Christmas spirit. Aussies will think of oppressive heat, gallons of cold beer, and barbecues. Yeah, nah, we do it differently down here, and if you’ve ever wondered just how differently, take these tweets as your answer…

Yep, it's Christmas in Australia. pic.twitter.com/jxQZNut6ei

Basically, we do Christmas differently here. Don’t get us wrong, it’s not by choice. Nah, the weather forces that s**t on us. Obviously, in the Far North, the rains have probably arrived and the crocodiles are swimming around on people’s driveways, but for most of the continent, the scent of burning forest isn’t usually too far away.

@savorpod hey gang, spotted a Goon bag Christmas tree ornament in a shop in Australia the other day pic.twitter.com/x3EuaIMweb

And then there are the inevitable storms. You’ll see people without garages and car-ports strapping mattresses to the roofs of their cars because the hail is the size of a f**ken golf-ball. If there’s no hail, you might get lucky with a f**ken electrical storm – and the lightning is usually pretty f**ken grouse this time of the year.

Other than that, it’s beaches, fishing, and barbecues everywhere. Fortunately, though, the Christmas spirit still exists. You can saunter through packed shopping centres to the sounds of the same four Christmas songs playing on repeat as you spend your hard-earned cash on presents.

Christmas is in summer here in Australia so not only are you peeling the paper of your presents you're also peeling your sweaty ballsack off your leg.

And this is how you know it's getting closer to Christmas in Australia #christmasbeetles #invasion #aussiexmas pic.twitter.com/kMNcEdphMV

Despite all that, we make it work, and while it can be a bit of a culture-shock if you’re not familiar with it, it’s pretty f**ken awesome to sink piss, eat great food, and float around the pool on Christmas Day. Yeah, nah, we wouldn’t change it for anything!

Passed this on the drive tonight, love the little Australia map – Happy Christmas from down under! pic.twitter.com/an5AiWd2b3

Final thought: Mate, seeing as it’s the time of year when we should all be sharing, load up the comments section with your beer recommendations, and your favourite uniquely Australian Christmas traditions. Have at it, and merry Christmas, ya bogans!