One of the things that marks the rich, wealthy, famous and elite from us little fellas is that people want to paint portraits of them. Deadset, it seems that you can find artistic endeavours dedicated to the worship of the upper class all over the shop. So, in a way, you should be flattered by any portraits of yourself that you find. Even if they are having a little fun at your expense. One bloke who’s not too keen, though, is rapper 50 Cent. Yeah, nah, he’s getting pretty frustrated with the Aussie artist painting these murals of him…

Apparently, the bloke responsible for the murals is Australian artist, Lushsux. Now, you may or may not be aware, but Lushsux is no stranger to controversial murals. Back in the day, he received international coverage for his portrait of Hillary Clinton. You may have seen it, but if not, it was the one in Footscray that saw the then-presidential candidate portrayed in a stars n stripes swimsuit. 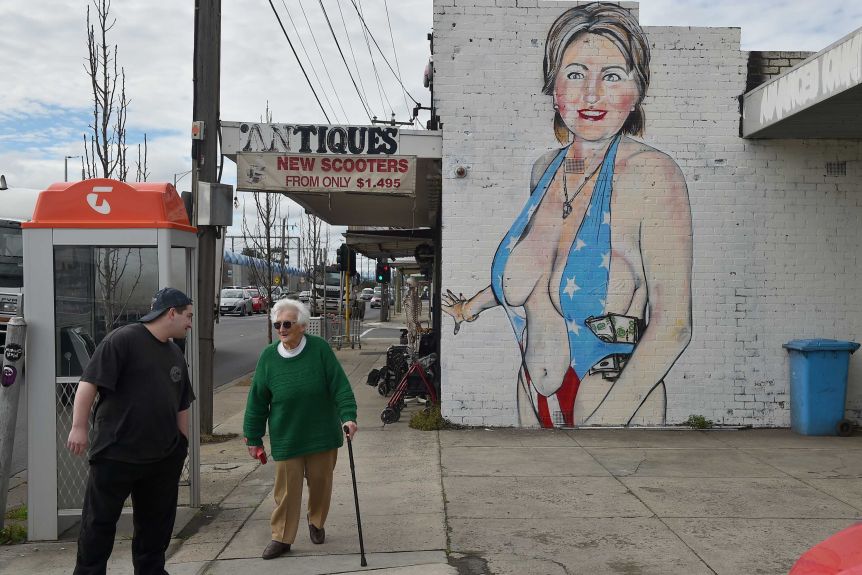 Well, he’s back at it again. He recently declared that it was ‘50 Week’ and unleashed some excellent portraits of 50 Cent. Of course, he mashed 50 Cent’s well-known visage up with a bunch of other celebs. He painted versions of Fiddy as Donald Trump, Post Malone, Chairman Mao and Taylor Swift.

As we mentioned before, though, the rapper isn’t too keen on the murals. You’d think he’d be stoked that people were still thinking of him, but apparently not. He took to his Instagram, posting, “Who the fuck keeps painting these murals of me all over the place. This is fucked up man.”

🤔Swifty Cent i’d like to hit this MF right in the back of his head while he doing this shit. 😤 smash or pass 😠#bransoncognac #lecheminduroi pic.twitter.com/yh3iRQemAO

Naturally, when Lushsux found out Fiddy was responding to the images, his enthusiasm was only bolstered. Lushsux, who clearly lives with his tongue planted firmly in his cheek and calls himself ‘the world’s first and therefore best meme artist’ has shared a few extra images on his Twitter, and his trolling game is next level.

this is some bullshit man, but how the hell is he doing it so fast. 🤦‍♂️alright he’s talented, 😒but why the fuck he pick me. 🤷🏽‍♂️#bransoncognac #lecheminduroi pic.twitter.com/syo7ALQeGb

We won’t go cutting and pasting everything that’s being said, but compare 50’s tweets and Insta posts to Lushsux’s. We reckon you’ll love it. 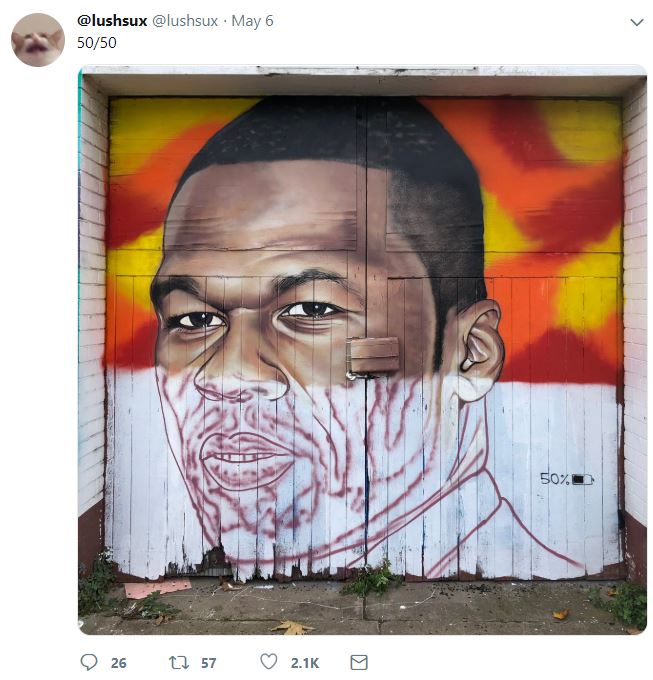 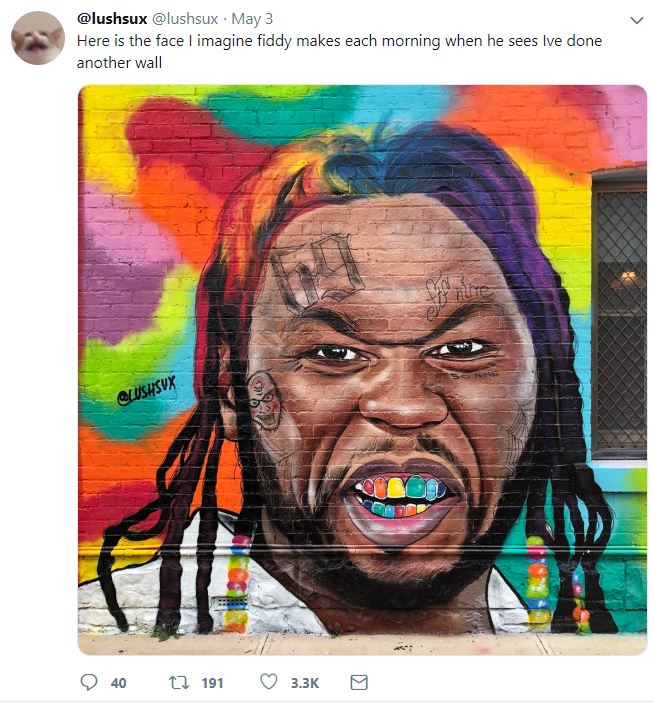 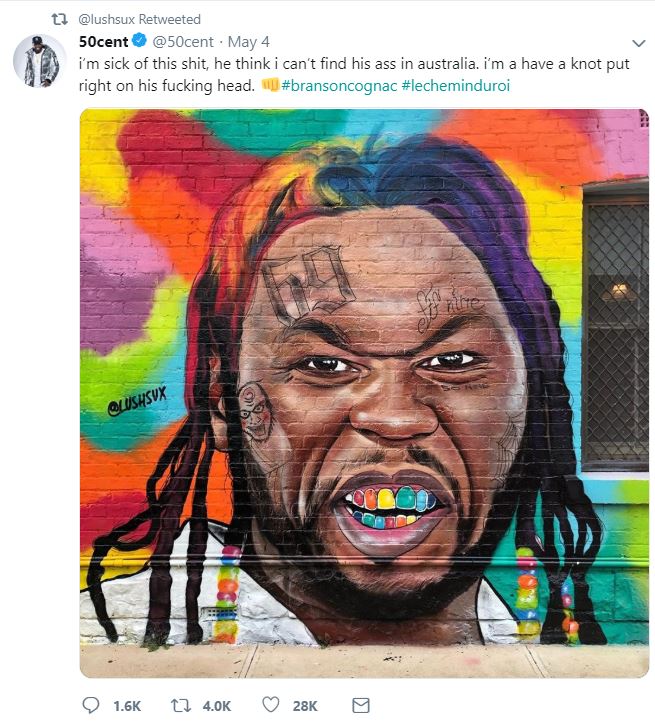 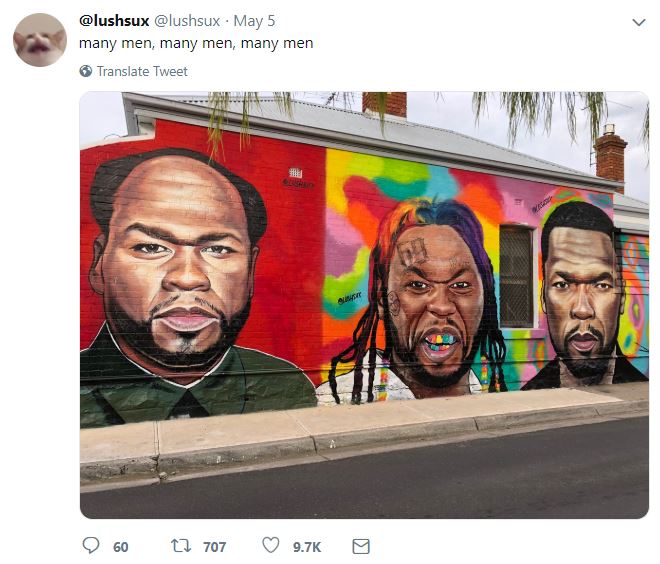 Final thought: Yeah, look, in all seriousness, we just reckon someone needs to tell Fiddy that here in Straya, putting s**t on someone means you like ‘em, and when that person takes the bait, that’s your licence to wind ‘em up even more. If 50 really doesn’t like these images (or the publicity he’s getting from them), he needs to stop playing into Lushsux’s hands.

👀Damn he made that shit look like it was easy, 🤔I want to meet this guy. #bransoncognac #lecheminduroi pic.twitter.com/C4fgRXefjK