If we had to hazard a guess, we’d reckon you lot are probably all over the relationship subreddits on Reddit. After all, they make for a good laugh – and a frequent shake of the head. Of course, you’ve gotta separate the fact from the fiction, and you can never be truly certain whether or not someone’s tickling your tackle, flicking your firehose or pissing in your pocket, but some stories need to be explored. Like this one.

So basically, when we found this one on the relationships.txt Twitter account, we knew we had to share it with you to see what you’d make of it. Basically, what you’ve got is a sheila asking a fair question: ‘what the f**k is my boyfriend doing with the butter?’ 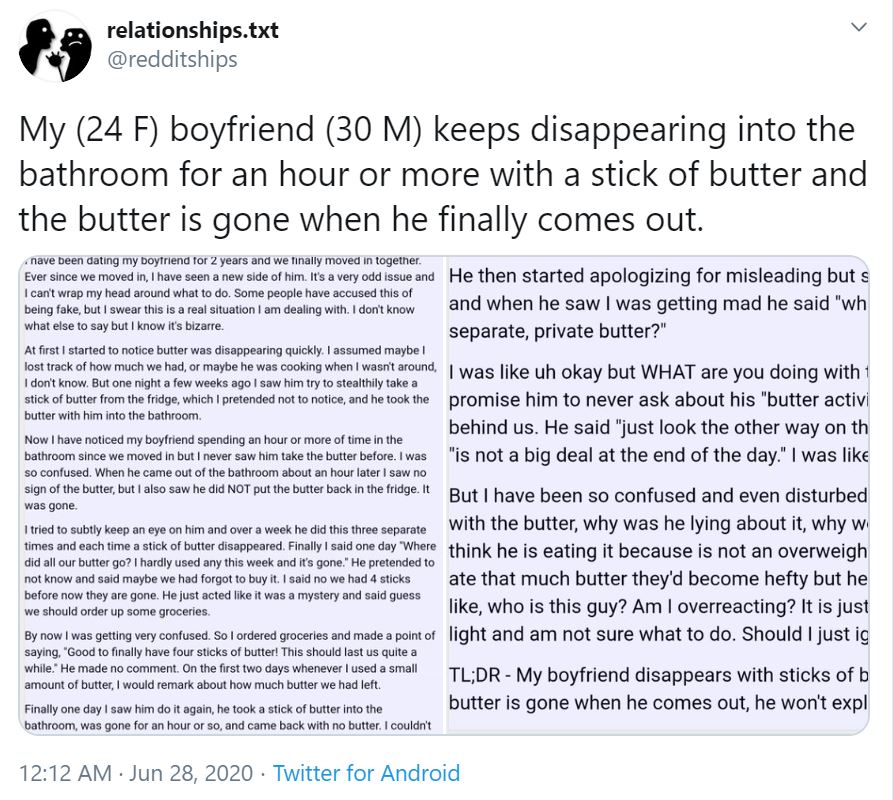 “I have been dating my boyfriend for 2 years and we finally moved in together. Ever since we moved in, I have seen a new side of him. It’s a very odd issue and I can’t wrap my head around what to do. Some people have accused this of being fake, but I swear this is a real situation I am dealing with. I don’t know what else to say but I know it’s bizarre.

At first I started to notice butter was disappearing quickly. I assumed maybe I lost track of how much we had, or maybe he was cooking when I wasn’t around, I don’t know. But one night a few weeks ago I saw him try to stealthily take a stick of butter from the fridge, which I pretended not to notice, and he took the butter with him into the bathroom.

Now I have noticed my boyfriend spending an hour or more of time in the bathroom since we moved in but I never saw him take the butter before. I was so confused. When he came out of the bathroom about an hour later I saw no sign of the butter, but I also saw he did NOT put the butter back in the fridge. It was gone.”

Funnily enough, the idea of this one being complete bulls**t has been mooted in the replies, but the op is sticking to her guns.

“I tried to subtly keep an eye on him and over a week he did this three separate times and each time a stick of butter disappeared. Finally I said one day “Where did all our butter go? I hardly used any this week and it’s gone.” He pretended to not know and said maybe we had forgot to buy it. I said no we had 4 sticks before now they are gone. He just acted like it was a mystery and said guess we should order up some groceries.

By now I was getting very confused. So I ordered groceries and made a point of saying, “Good to finally have four sticks of butter! This should last us quite a while.” He made no comment. On the first two days whenever I used a small amount of butter, I would remark about how much butter we had left.” 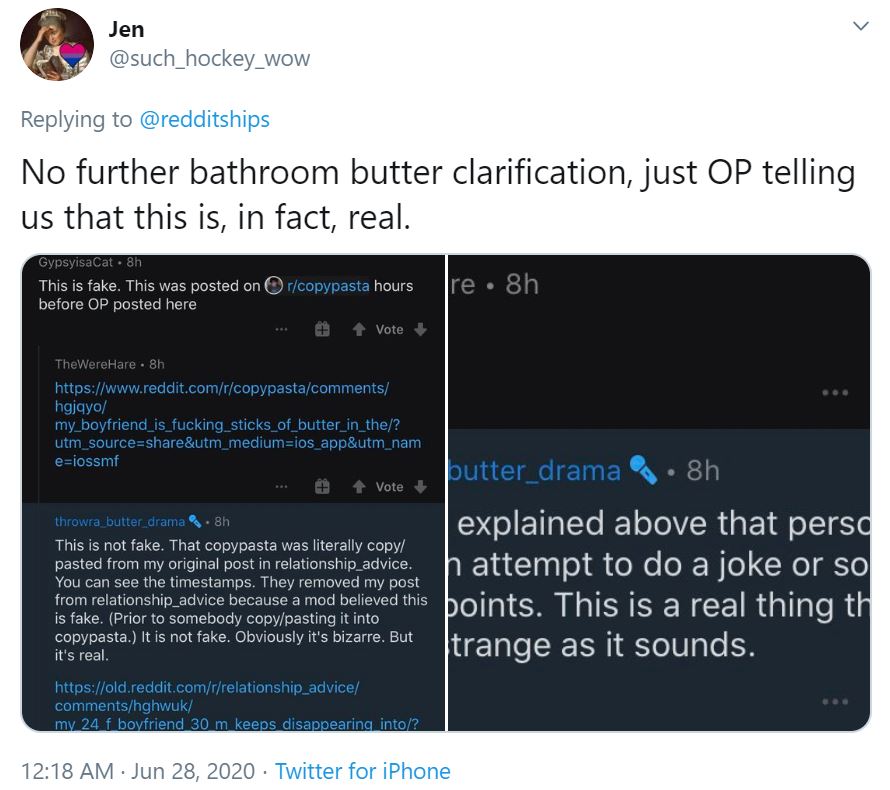 Anyway, as you can see, it’s a messy story, and we’re not sure exactly where he’s sticking all those sticks of butter, but we’ve got a pretty good idea.

“Finally one day I saw him do it again, he took a stick of butter into the bathroom, was gone for an hour or so, and came back with no butter. I couldn’t believe it. So when I made dinner I acted shocked that one stick of butter was gone. He said maybe we only had 3, but he knew I’d been making a point of it. The very next day another stick of butter gone. I listened at the bathroom door and heard sink water running and thought I heard moaning noises. I was so confused.

Obviously, that there is a massive f**ken play. Old mate’s put on the spot, and in most cases, the time for truth is here. Instead, he’s got another option: separate f**ken butter!

“He then started apologizing for misleading but said “let’s just not talk about it” and when he saw I was getting mad he said “what if I just order my own separate, private butter?”

I was like uh okay but WHAT are you doing with the butter? He asked me to promise him to never ask about his “butter activities” again and to just put it behind us. He said “just look the other way on this one thing” and stressed how “is not a big deal at the end of the day.” I was like uh okay I guess.

But I have been so confused and even disturbed about it. Like what is he doing with the butter, why was he lying about it, why won’t he tell me. I don’t even think he is eating it because is not an overweight guy and I feel like if somebody ate that much butter they’d become hefty but he shows no signs of it. I am just like, who is this guy? Am I overreacting? It is just so odd I see him in a different light and am not sure what to do. Should I just ignore it?” 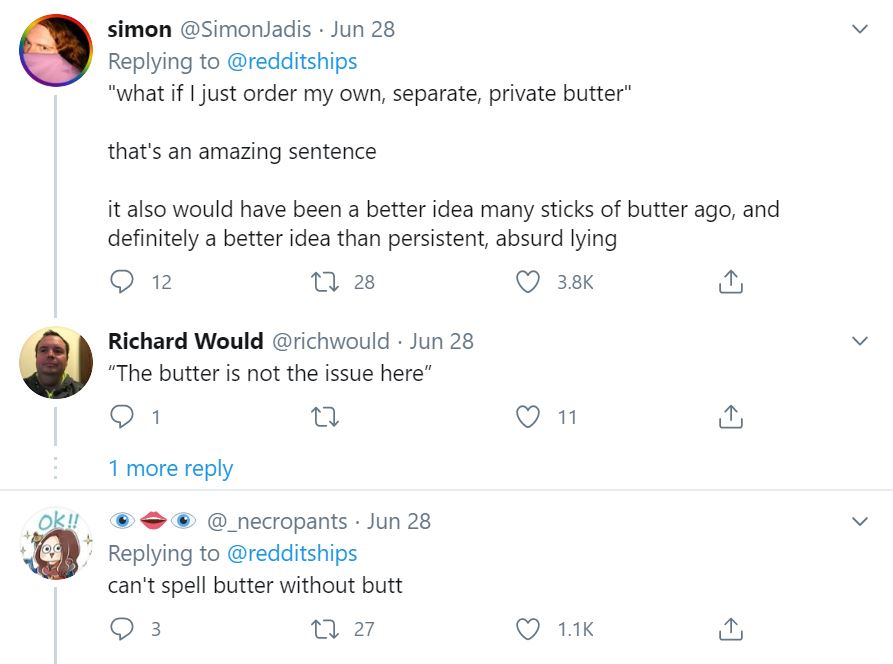 So there you have it! We reckon old love has an inkling, but it’s over to you blokes and blokettes. What the f**k is going on here? Do you know? Can you help her with her problem? Should we even tell her?

“TL;DR – My boyfriend disappears with sticks of butter into the bathroom, the butter is gone when he comes out, he won’t explain what he does.” 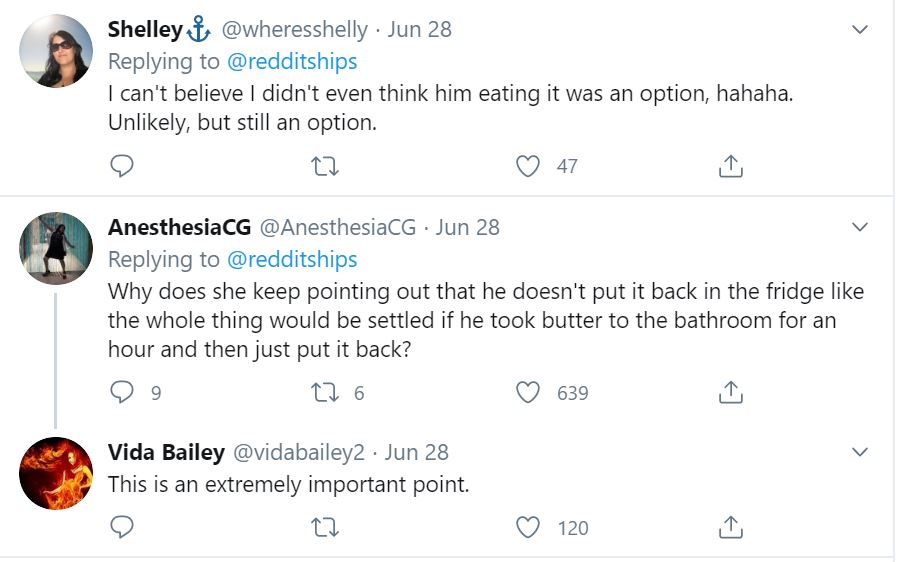 Final thought: Yeah, look, in retrospect it’s probably not the worst idea to just leave this one alone – as the boyfriend originally requested – and try to avoid any kink-shaming. Yeah, nah, by the same token, the world’s full of all sorts of people, and plastering their strange habits all over the net isn’t necessarily a great idea. Having said that, though, if your significant other does some weird s**t like this, let us know in the comments section.

Just in case you missed it, here’s one of Ozzy’s latest commentary videos…Ozzy Man Reviews: Humans Being Nice #2