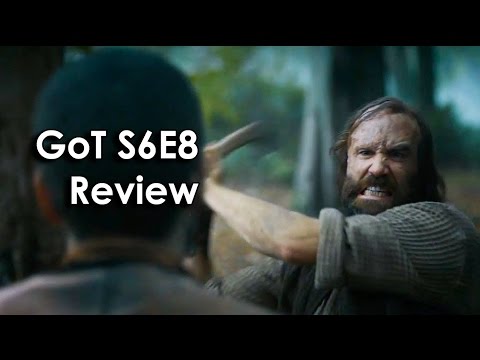 Oooooooooooh I thought this episode was a little shakier than previous ones.

This show is supremely good at hiding its problems, but a few little cracks in character and plot became visible. There’s not going to be much of a chance for it to turn too shitty though as “Battle of the Bastards” next week is likely gonna be HUGE and awesome.

Despite a few character developments getting a little clunky I found the episode enjoyable none the less.

The title of the episode is “No One” and it was a tricky one to pin down thematically this week. We explored identity for the most part.

Anyhow, enjoy the recap and my review in the second half of the video.

The fun times are below!

How did you guys find this one?

Are you worried about any plots or characters not adding up as we approach the tail end of the season or are ya just pumped for the battle of the bastards!?

By the way, it’s that time of month again if anyone is interested in Loot Crate the date to order for the next send out is by JUNE 20.

Loot Crate delivers a mystery box of pop culture merchandise to ya doorstep via a subscription.

My favourite item from the “POWER” themed crate for May was the Hulk figurine (photographed below).

If ya wanna get in on the theme of “DYSTOPIA” for June then use this URL: http://www.lootcrate.com/ozzymanreviews

And the code “ozzyloot” to get 10% off your subscription. The crate will include exclusive merchandise from The Matrix, Terminator, Fallout, and Bioshock.

See you with another Thrones review same time next week ya legends.