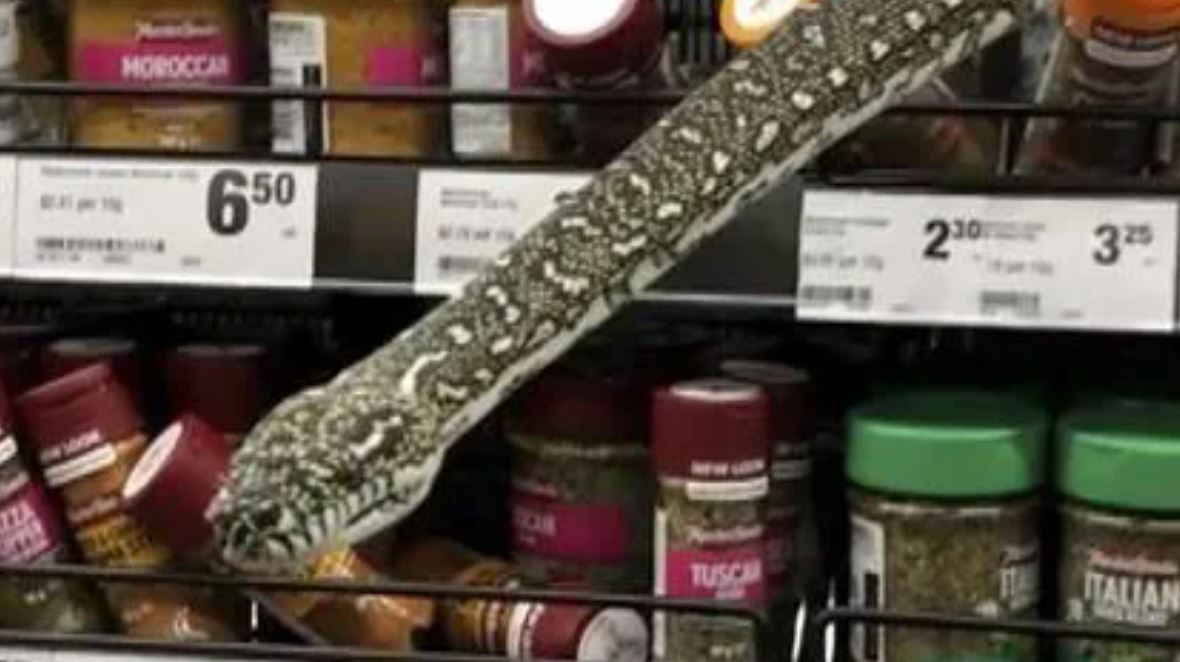 When you talk about stereotypical Australia, you might assume that there are bloody snakes everywhere. Fortunately, most Aussies are sensible blokes and level-headed sheilas, and they’ll point you in the right direction. “Yeah, nah,” they’ll say, “you hardly ever see ‘em.” The key phrase there, though, is ‘hardly ever’. Yeah, deadset. From time to time, you will see a snake in an unexpected place: if you’re a sheila, that’s more often than not in your DMs, but this time, the surprise serpent slipped into a Sydney supermarket. Check it out…

Local shopper Helaina Alati was perusing the spice rack and deciding how to flavour Monday night’s grub when she saw the scaly customer in all its glory. She said it popped out “just 20cm” from her face. Helaina wasn’t phased, though. “It just wanted to say hello,” she told Guardian Australia. “It’s lucky I was the one it popped out to. Most people would have freaked out,” she added.

The appearance of a diamond python shocked shoppers at a Woolworths supermarket recently. #9Newshttps://t.co/eYbbDm53FV

And she’s not f**ken wrong. Some blokes would’ve popped a bollock and some sheilas might have burst a boob at seeing a big bloody reptile when least expected. Anyway, the snake in question was a diamond python: a fairly common species that’s capable of getting pretty f**ken sizeable.

Yeah, nah, snakes like these are pretty closely related to carpet pythons and are well-known for getting into the chook shed and stealing a feed. This one, though, wasn’t keen on the regular stuff. It wanted something pre-packaged, presumably sick of getting feathers in its throat.

My sister in law was at the supermarket as they extracted a diamond python from the spices pic.twitter.com/5rXkj26dcK

Fortunately,bloody Heleina’s an awesome Aussie and she’s trained in the arts of snake-wrangling. Yeah, nah, we hear she’s wrestled more than a few pythons in her time – and that’s not even a pun. Deadset, she knows her s**t.

She had the whammy on the python before it even started and promptly caught it and returned it to the bushland where it belongs.  “I knew straight away it was non-venomous, it was non-aggressive, it wasn’t going to be a problem for anyone. If anything, I think everyone was a little bit excited. We’re all in lockdown so it was kind of like the most excitement we’ve had for a while.”

The local supermarket released a statement. It basically amounts to, “Yeah, there was a snake in here. It’s Straya, what are you gonna do about it?”

Final thought: It’s been a while since we got to talk about snakes on this site, but as we start to head out of winter and towards spring, you can bet we’ll be seeing a few more of ‘em. Keep your eyes open while you’re out and about. They’re not always harmless and there’s not always a legend like Heleina on hand to get your snake out for you.

Not a big deal, just a 3-meter-long diamond python in the spice aisle of a supermarket in Sydney, Australia. Helaina Alati, a trained snake catcher, captured the footage before safely removing the python and relocating it to a nearby bushland. pic.twitter.com/t6ohcLAK1m