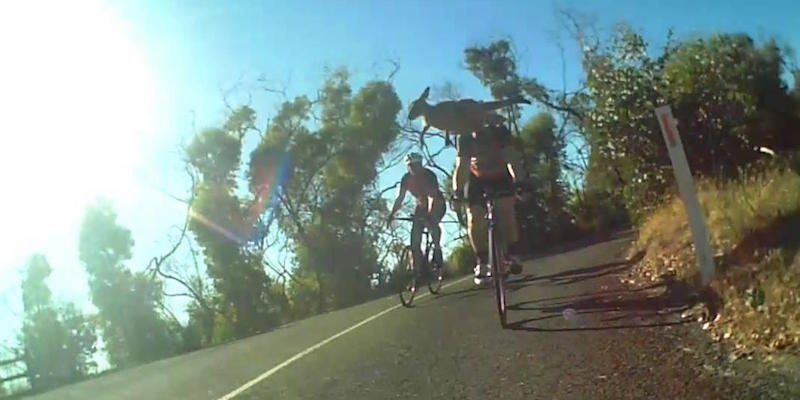 Australia’s got a shitload of things that’ll fuck you up; sharks, snakes, and spiders are some good examples and they’re just a few of the ones that start with the letter S but factor in the other 25 letters of the alphabet and the entire country starts to look like one giant assault course to most international tourists.

One animal that barely ever gets mentioned as being a danger to humans, however, is the kangaroo. This is understandable; they’re cute, bouncy, and most people associate them with a kids breakfast serial but I’m here to warn people, kangaroos are mental. Just look at this bloody guy, for goodness sake…

Not only that, they’re deadly too; between 2000 and 2010, these bouncy fuckers were responsible for 18 human deaths in Australia. That’s more than both sharks and snakes (who have been responsible for 16 and 14 deaths respectively). In fact, roos are fourth most deadly animal in the Land Down Under (after horses, cows/bulls, and dogs). Not only that, they’re also completely insane when it comes to crossing the road, as can be seen in this clip.

In it, cyclist Michael Bland is out on a peaceful Sunday morning ride with a few mates in the hills to the north-east of Adelaide when all of a sudden, a kangaroo comes flying out of the bushes and onto his goddamn head!

Looking a little shocked, the little fella bounces off as Bland says to his riding mate; “Something just clipped my helmet. Tail or foot?” Amazingly, he somehow managed to stay on his bike even after taking a roo to the face.

Kangaroos are endemic to Australia and are dotted all over the continent. Due to the fact that they have no natural predators, they do exceptionally well as a species and their population currently stands at 50-60 million (roughly double a number of humans in Oz).

Roos might not spring to mind (see what I did, there?) when one thinks of the deadliest animals in Australia but it’s a good idea to keep an eye on these bouncy bastards. Unless you’re that guy that punched one in the face; he just don’t give a fuck!

WATCH A CYCLIST VS A KANGAROO ON THE PLAYER BELOW: