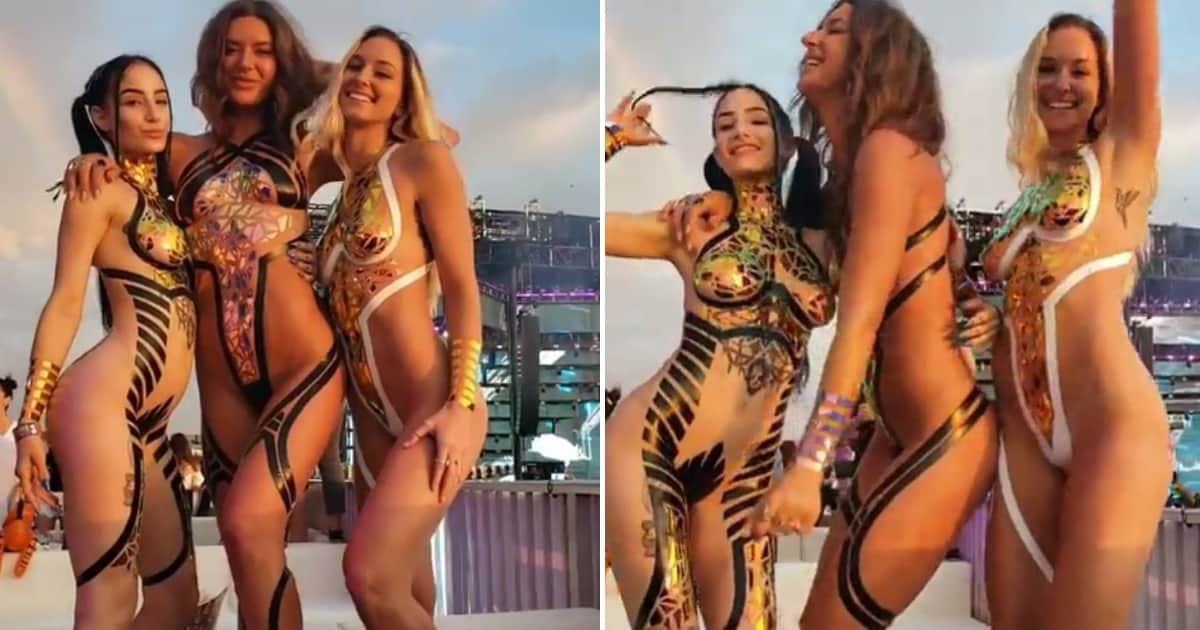 Fashion is one of those highly competitive industries where people are constantly pushing the boundaries and looking to set themselves apart from the pack. Quite often it takes years of hard work, pluggin’ away and working on ya craft behind the scenes.

Take Joel Alvarez for example. He’s the bloke behind The Black Tape Project, which designs costumes made from humble electrical tape. He was snapped at Ultra Music Festival with a couple models sportin’ his special brand of clothing.

I reckon these outfits would be about as useful as an ashtray on a motorbike as far as everyday wear is concerned, but for a music festival like Ultra or Coachella? Reckon models and celebs will be all over it like white on rice.

@ultra had rainbows this year.

Joel Alvarez explains how he got started on the website:

“One day in 2008 I was a rookie photographer who was working with a model that suggested I use electrical tape [on] her for the last look.

“I honestly had no idea why she would want this but to make her happy I attempted to use this tape as wardrobe. Essentially I just wrapped her in black electrical tape!”

Even though Joel and The Black Tape Project has been thrust into the spotlight by “dressing” these models at the recent Ultra Festival,  seems he’s been at this caper for a while now, and slowly building his empire.

I suggest all you sparkies get down to ya local Middy’s and stock up on ya electrical tape in case this trend catches on, cause ya know once one of the bloody Kardashians is seen in this get-up, they’ll be sold out everywhere, haha.

“It sparked an idea in my head to develop this idea. In the following weeks I asked a few models that I had worked with in the past to let me practice on them. That was the moment the designs started to evolve!

“Although primitive with a lot of trial and error, I remember thinking I was definitely on to something. I began to notice that the way the lines of tape would complement the figure was unlike any wardrobe or fashion out there.”

Here is my point of view of ultra with my @opkix camera mounted to my shades.

I reckon the girls look stunning. I really do. Ya just gotta take it for what it is. It’s art. Fashion. F**ked if i know, but no-one’s suggesting that everyone start wearing this kinda kit on the daily. Just for a bit of fun yeah.

I met this dragon and we had a fire conversation. Model @priscilla_huggins Make up @jocelynjohnson_

I do have a couple questions though? How the bloody hell are these sheilas meant to p**s? For real? Any festival I’ve been too, I’m drinkin’ like a fish and that’s gotta come out at some point.

And do they go the Band-Aid method for removal? Just rip it off? Bloody hell, I’d be as nervous as a long tailed cat in a room full of rocking chairs when it got to me nether regions!

Final thought: What constitutes as fashion and art has always been pretty subjective. And this sort of gear mightn’t be real practical, but it’s innovative, original and pretty cool to look at. Joel looks pretty stoked with his career choice that’s for sure, and I can imagine there’d be a f**cken long line of applicants if he was ever lookin’ for an assistant to hold his scissors – Check out the video below to see Joel in action.

By Ozzy Man 2 months ago

By Penelope "Joey" Townes 2 months ago

By Kezza Williams 7 months ago

Although some may be black, some may be cold, some may be big and some may be dead, we all have a heart of some description. And, in fairness, regardless of how yours is described by your peers and detractors, it’s pr...