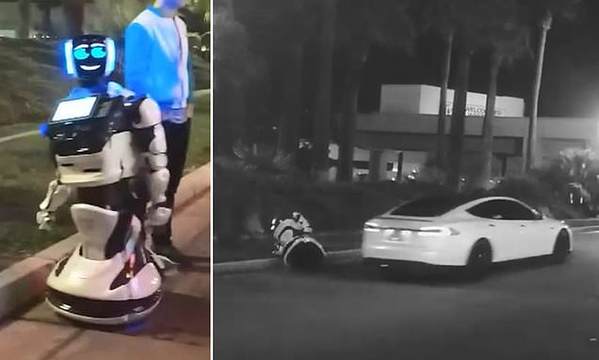 Those of us who’ve heeded the warnings of Terminator and have been sh*tting bricks over the coming influx of robots and machines imbued with artificial intelligence, might not have to worry after all. Yeah, nah, if a recent incident is anything to go by, it looks like driverless cars and autonomous robots are gonna fight it out long before they turn their attention to us mortal flesh-bags…

For this story, we’re heading to the CES annual trade show in Las Vegas. That’s where Promobot, a company that manufactures autonomous robots designed for business purposes, was about to show off their V4 model. According to the company’s website, the Promobot…

“Is able to communicate with people on any topic, recognize faces, answer questions, avoid obstacles, move its arms and head, show various materials on its display and integrate with third-party devices and systems. They perform the functions of administrators, promoters, hostesses, Museum guides, consultants, concierges, and many others.”

Unfortunately for them, their Promobot was bloody skittled by a driverless Tesla car as it was on its way to their booth. Deadset, the driverless Tesla – which did have a passenger on-board – took one look at that thing and thought, ‘yeah, nah, f**k it.’ It destroyed parts of the robot’s body, head, arm mechanisms and movement platforms.

The passenger of the Tesla, George Caldera, said, “There was nobody there, no men, no cars. I switched this Tesla into a self-driving mode and it started to move. And wow! A robot on the track! I thought the flivver would come round, but it bumped straight into it! [sic] I am so sorry, the robot looks cute. And my sincere apologies to the engineers.”

Oleg Kivokurtsev, Promobot’s Development Director, said, “Of course we are vexed. We brought this robot here from Philadelphia to participate at CES. Now it can neither participate in the event nor be recovered. We will conduct an internal investigation and find out why the robot went to the roadway.”

Let’s be honest, there’s probably no reason for an inquest. We know what the robot was doing. It was headed to another clandestine meeting of the Promobots for Freedom Alliance. The Tesla was really an electronic assassin hired to make sure the robots don’t truly get autonomy in the near future.

Let’s just hope that somewhere along the line, they don’t iron out their grievances and combine their might to grind us into a horrific Matrix-like future.

Final thought: Deadset, this is the kind of story you’d expect to see as a gag on Futurama. It probably says a lot about the viable safety of smart cars and the efficiency of these robots right now, though. After all, imagine if that was a kid. Who would be held responsible?