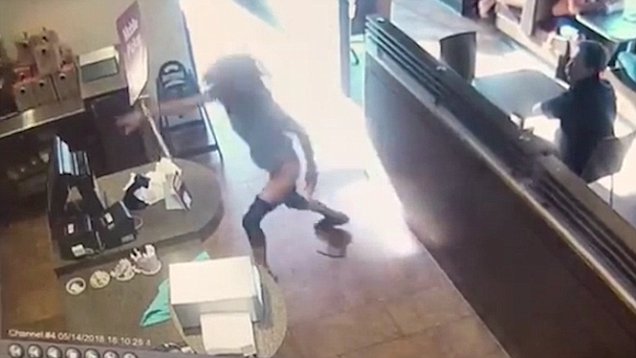 Woman shits on floor of restaurant and throws it at employee

“You’re really giving me the sh**s,” is a charming little turn of phrase we’re quite fond of here in Ozzyland. I’m not sure where the phrase comes from etymologically, but it’s a good one. After you’ve watched this video of a woman in Canada get so mad at the staff in a Tim Hortons restaurant she pumps an egregious mud muffin on the floor and throws it at them, you’ll never look at the phrase in the same way. Chuck’s got the review… “Um, why are you removing your sweater?” Credit: LiveLeak

When this video starts, you can see that old love has a real bee in her bonnet. She’s pretty worked up about something and she’s letting the poor counter staff know about it. Given the context, our best guess is that she’s asked to use the dunny and been told to f**k right off.

If that is the case, they really should have let her release that corn-eyed butt snake into the wild. You can see the conversation in the video is basically her saying, “F**k you,” and the staff asking her to leave. Of course, her response is basically, “F**k you. I really gotta twist some licorice. This turtle-head is already halfway out the back door and if you don’t let me use the toilet I ain’t even gonna make it that far myself!” The counter-staff obviously say, “Yeah-nah, stiff sh** love. That sounds like a you problem.”

And that’s when she really cracks it. “Yeah,” she says. “You’re gonna f**ken regret this when I make it your problem too!”

She furiously yanks serviettes from the dispenser and drops her pants. At this stage no one is running for the fire-hose so they can blast the woman – who may or may not be related to the mad pooper – and no one thinks that at this point they should just give her the bloody key.

She backs up, arse hanging out all over town, really puts the ‘grumpy’ into the phrase ‘pinch off a grumpy’. She makes a grunt sculpture right on the floor of the restaurant. It hits the tiles, presumably with a wet splat, and she f**ken launches it right at the counter-staff. She flings that faeces with the panache of an angry monkey. To recycle one of my old man’s favourite jokes, her favourite book is clearly Who Flung Dung by Willy Catchett. Outraged, she hurls that Hershey hero.

The counter-staff have scattered and she finally goes for the serviettes. She’s gonna clean up now, surely. Nope! She throws them too! She wipes her arse on them, she chucks them on the floor and she f**ks off. A picture of sanity. Credit: LiveLeak

Final thought: Bloody hell, that was outrageous. I don’t know how mad you have to be to sh** on the floor and throw it at someone, but it’s never a good look – even if someone’s really given you the sh**s!