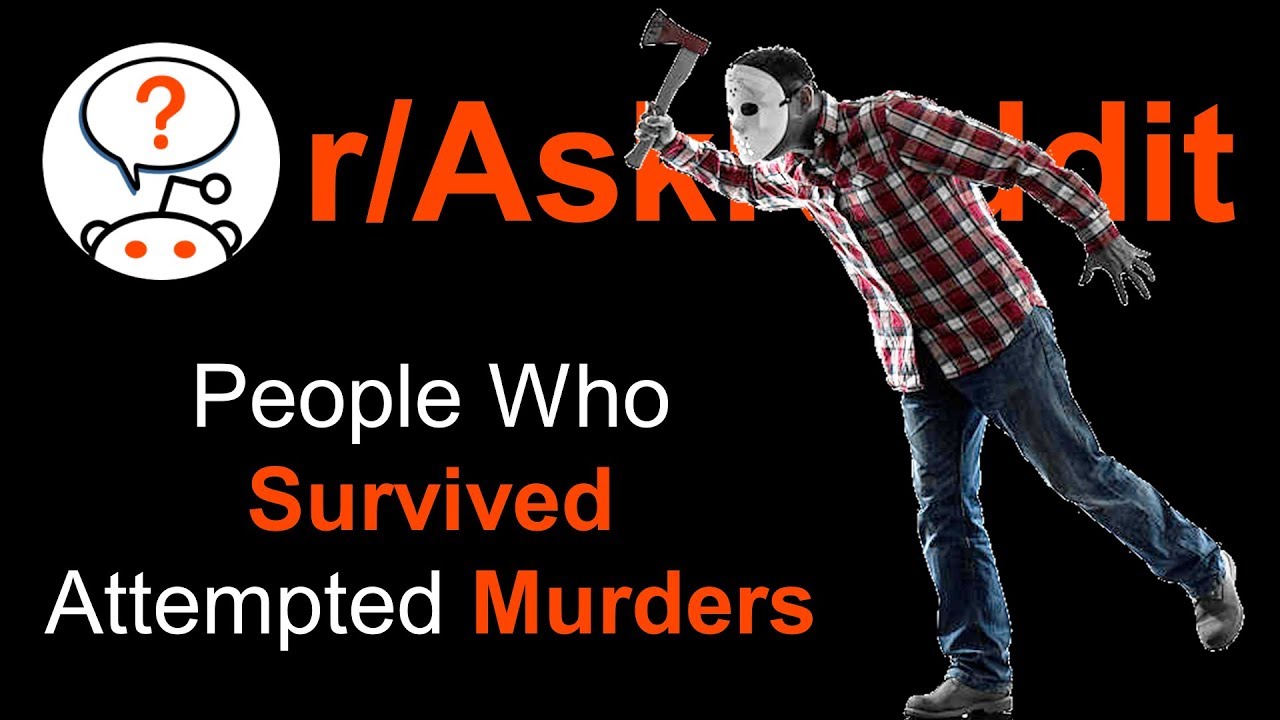 Ya know, every now and then we like to throw a curveball into our usual collection of articles about animal attacks, epic feats of awesomeness and crazy Russians and hit you with something a little more real. One of our go-to places for that sort of s**t is the always entertaining corner of the internet that is Reddit. We know that sometimes it can get a little dark on there – and that you have to take what you read with a pinch of salt – but this time we’ve got some remarkable feats of endurance from those who’ve survived attempts on their life.

My home was just 10 minutes away from the train station. After a few minutes I felt someone following me. No big deal I tought, just someone else walking home. But I started walking faster. I realized the person behind me was catching up…weird. In my head I started to make up scenarios of how to defend myself if the person would attack me. Never would I think of this to actually happen.

Well, until I felt something on the back of my head, hitting me hard. I went furious. I turned around and attacked the guy. My mind was just full of anger towards this stranger who, what I thought, hit me.

We were wrestling until I fell on the ground. He was sitting on top of me, strangling me. I tried to crawl my nails into his eyes as deep as I could, but I started to black out. Suddenly there was this tought in my head “wake up, or you will die”…well, adrenaline kicked in again and I opened my eyes and screamed of the top of my lungs, attacking him again.

That helped. He stood up and began to run. I layed there for a few seconds, then I started to run home, still screaming.

My mom was already at our door and opened for me because my screams woke her up (or her mother senses, who knows?) She immeadiately called the cops and they could arrest him on the same night.

It turned out that he actually shot me in my head from behind. They assume that the gun didn’t work properly, the bullet didnt penetrate my skull and stuck in there, but as far as I know they never found out why the gun misfired. I’m glad though. He told the cops that he already followed me a few times in the past, but never had the guts to “do it”. He wanted to kill me and rape my dead body.

I know that’s a wild story, I have some swiss news paper articles as a source if someone cares though. – Trashtashy

Let’s just start with a simple thought: f**ken hell, the world can be a really scary place. Having said that, all of the people we’re hearing from today are bloody survivors – and there’s something inspirational in that.

I have a friend who had a party at his parents house when he was in high school that a ton of random people went to. He got super drunk during the party and went upstairs to go to sleep, knowing that his friends would watch the party for him. My friend woke up from his nap to a guy from his school sitting on top of him stabbing him death. He was stabbed seven times before it stopped and he laid there on the bed dying. The only reason he is still alive is because his best friend came upstairs to ask him if it was alright if he made a frozen pizza and found him. The assailant was put in jail and recently was released and it scares me to know that a guy who “wanted to know what it would feel like to kill someone” (said during the trial), is still out there free. – Kae_Shann

Thank God for my nosey neighbors. I always used to hate how nosey they were. Until this happened. When I was about 10 I was riding my bike outside. My parents always let me ride my bike outside during the summer, but only up and down the street we were on. One day, a man in a fan was parked across the street. He called to me, asking me if I had seen his dog and could help him find it. Me, being a dumb child, offered to help him find it, and I started walking towards his van. My neighbor, and older white lady, came BOLTING out of her house hooting and yelling, telling the guy to back off. The dude got back in his car in a hurry and took off, and it wasn’t until many years later that I realized how bad that situation could have been. – ThrillhouseMax

Of course, we’re lucky here at Ozzy Man Reviews. Aside from dodging the millions of deadly f**ken critters that call Australia home on a daily basis, we’ve not had too many people try to kill us. There’s the odd crocodiliac when you go for a swim and the occasional drop-bear, but with Ivan Milat in prison and just about ready to kick the bucket, we have it pretty sweet.

I was abducted at a gas station during undergrad. The locks on my car were broken, and as soon as I got back in, a strange man came in and forced me to drive him to an ATM. I am paralyzed with fear so any sense or reason I had went out the window. He claimed he worked at Wendy’s and for my generosity he would give me all the Wendy’s I ever wanted. On the way to the ATM he showed me pictures of his daughters (on his clearly stolen cell phone). Then a Whitney Houston song came on the radio and he starts BAWLING his eyes out and screaming “Why do all the good people have to die, only bad things should happen to bad people.” I go to the ATM, take out cash, give it to him thinking it’s over. He then makes me get back in the car and drive him somewhere else. We pass by some train tracks and I’m thinking this is it, this is where I will be murdered. He asks me what I’m studying in school, and I tell him Biochemistry. “I believe in jet propulsion and all that shit. WE ARE NOT ALONE ALIENS ARE AMONG US.” He then makes me pull over at a gas station and he tells me “drive away sweetheart”. I call the cops, had to do a line-up, apparently this dude had done this to a ton of other women, and some were less unscathed than I was…. – Isquash

As always, assume that a lot of what you’re reading in these Reddit stories is a crock of s**t and take it as a bloody good source of entertainment and you’ll have yourself in the right frame of mind to discover some of the real-life horror stories that people have managed to survive.

My supposed best friend decided that my wife and I were too perfect. Therefore it must all be an act and I was obviously abusing her.

He was at our house after I made an awesome dinner and we were having fun drinking and singing karaoke.

I went to the kitchen to put some glasses away, came back and leaned on the couch with him slightly behind me to the left of me.

Then I heard a thunk and felt an amazing amount of pain on the top of my head. He had picked up the whiskey bottle on the table and smashed it into my skull.

I was very confused as to wtf was happening. Then the blood started pouring. I didn’t want to get blood everywhere so I went to the kitchen.

Dude is pacing back and forth saying weird shit. I thought about my gun (which was close by) but I wasn’t thinking quite straight. He left.

I had a huge concussion and still suffer side effects from it.

My number 2 goal in life is to live longer then that asshat just so I can shit on his grave. – Stayathmdad

Some of them survive through sheer willpower. Others through absolute luck. Some even get there through a timely intervention by a bloody stranger or a hungry mate.

Sophomore year of college went with a friend to go hang out at his old college. We were supposed to crash with a few friends of his but we met a few ladies and ended up at a pool party. Next day went home and my friend started getting calls from one of his buddies moms asking if he’d seen him.

Turns out in the middle of the night a few guys broke into the house kidnapped my friends buddy and roomate. Took there car and drove them out to the middle if nowhere and executed them. I guess it was part of some gang initiation.

I was supposed to sleep there with my friend. I still sometimes think about it and get the shivers.

This happened in 1999 in stubenville ohio. Someone posted a link to the wiki page in the comments. – Kdogg573

Final thought: As alluded to above, we can’t really explain what it must be like to have someone try to kill you. We like to think we’d be survivors, but f**k me, it’s a tall order. If you’ve got a bonza story of this ilk, post it in the Facebook comments. We’d love to read it!