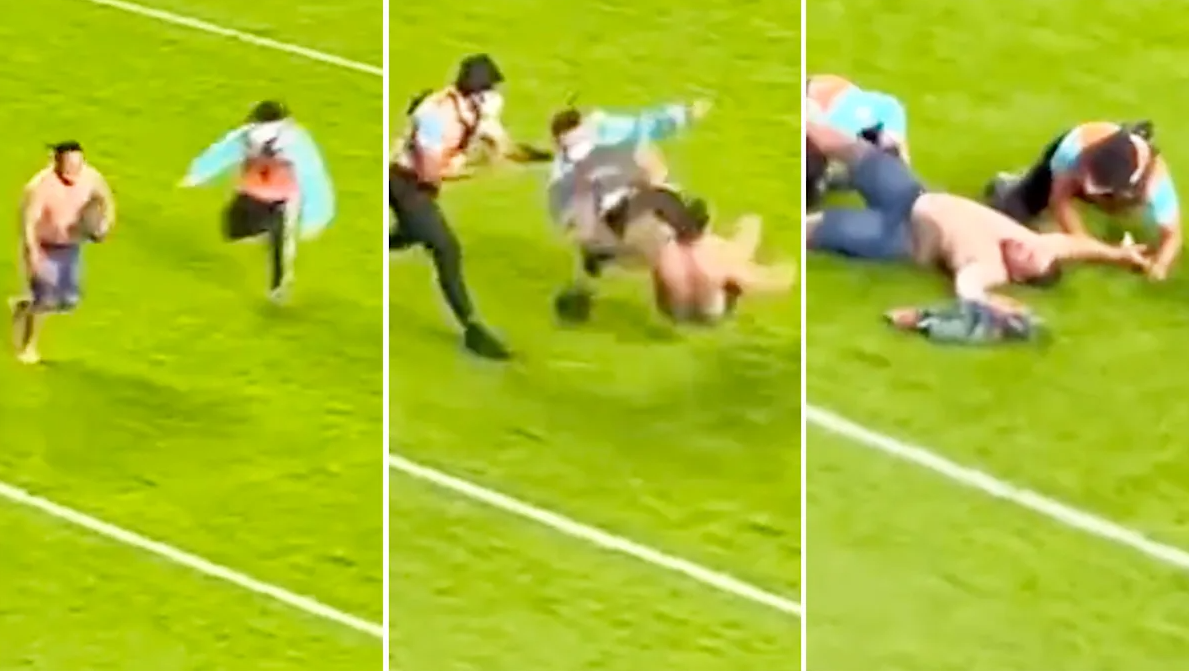 Mate, we don’t know what’s going on these days, but security guards have clearly been brushing up on their tackling technique. A little while back that sheila got f**ken slaughtered in the NRL, and now two blokes have been f**ken destroyed at the Melbourne Rebels vs Blues clash in Auckland. Give it a squiz below…

All right, we’ve gotta say that there’s no wonder these are doing the rounds. The hits are pretty f**ken impressive. Best of all, there are two separate tackles put in on two separate streakers and in some cases, fans aren’t sure which is best.

A streaker has just been ABSOLUTELY flattened at Eden Park. Not sure I've seen a hit like it. Wowee.

We’ll look at ‘em chronologically, though. The first is a f**ken doozy. Old mate hits the pitch, and despite it being a close call, he manages to evade the first tackle from security. Yeah, nah, the cheeky bugger fair dinkum thinks he’s gotten away with it until F**KEN BAM!

Yeah, nah, he knew he was done after that.

And then there was another one. This one’s not as brutal, but some fans are praising the technique. This bloke uses pace to leave the first security guard faceplanting on the grass, but he’s no match for the next security guard. As you can see from the footage, this dude comes in low and hard and f**ken cleans up.

From there, it’s stacks on and the dude’s night comes to a premature end.

Turns out there was a second streaker right after and this tackle might be even better!

Eden Park’s front line of security seem to be not the best tacklers, but their cover D is lethal!

After the first streaker, sports reporter Guy Heveldt tweeted, “A streaker has just been absolutely flattened at Eden Park. Not sure I’ve seen a hit like it. Wowee. The Rebels should sign the security guard. Hit of the year.”

After the second, EK Rugby Analysis tweeted, “Turns out there was a second streaker right after and this tackle might be even better!  Eden Park’s front line of security seem to be not the best tacklers, but their cover D is lethal!”

Final thought: Once you’ve had a look at the hits, let us know which one you think was best. See you in the comments section, you big bloody bewdiful legends!