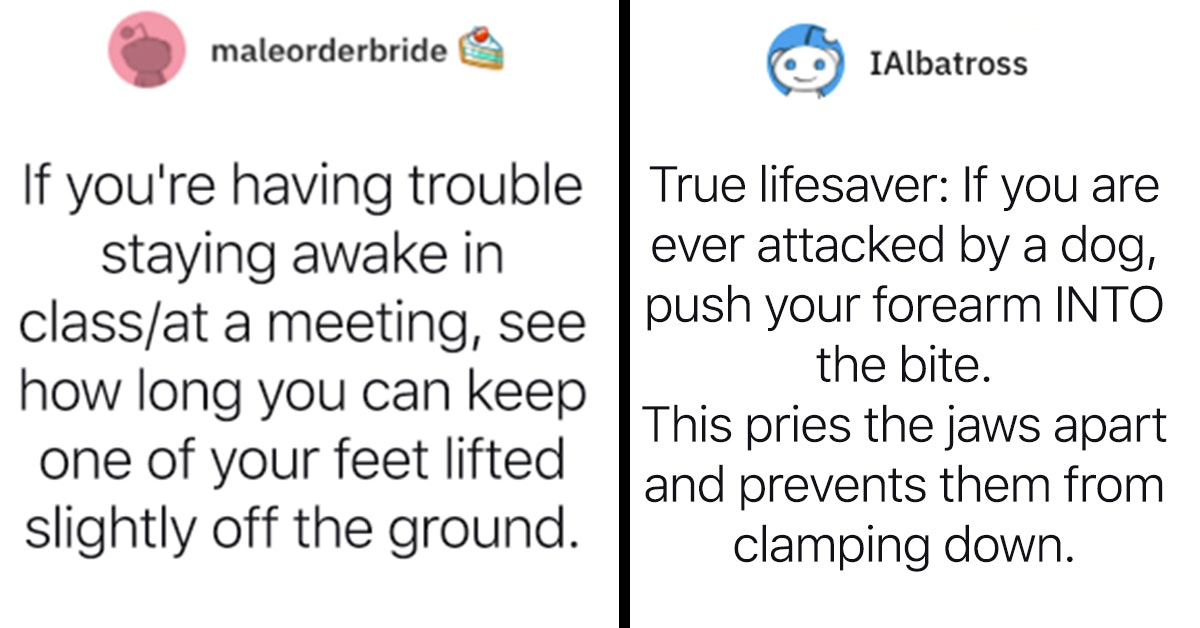 One of the things we love about the internet is that despite its reputation as a haven for trolls and s**tstirrers, there are just as many people on here who actually want to make the world a better place. Yeah, nah, fair dinkum, we reckon the internet reflects the real world in many ways, and that’s what you see here. Sure, there are drongos with loud voices, but there are also top blokes and sheilas everywhere. That’s why we like this story…

In a recent thread on Reddit, which is another place renowned for bulls**t that also features loads of top-notch humans, people were sharing advice. Of course, like everything on Reddit, it needed a gimmick. This time it was for advice that sounded like it had to be a load of bollocks, but that was supposedly legit.

More life advice than a life hack, but: “A dropped knife doesn’t have a handle.” If you ever drop a kitchen knife or other bladed instrument, just let it fall. Trying to catch it will almost certainly give you a nasty slice on the hand. —Stillwater215

Don’t just let it drop, literally move back as quickly and safely as you can. —donteatmyshoe

If you feel like you have to shit, but aren’t near a toilet, find a warm surface to sit on (cement, car hood, heater, etc.). Like magic, the urge to go will disappear for 20+ minutes, hopefully buying you valuable time to find a toilet!

Obviously, people brought the f**ken goods. Deadset, the advice you can see here runs the gamut from pest-sprays that won’t choke the s**t out of you to delivering ways to wake up when you need to be alert.

if you stand up too fast and your head starts to spin/rush/blackout tighten your abs as hard as you can and it’ll help drastically reduce the head rush. you can also do it preemptively to help stop it before it even happens —54turtlelord

When it is icy or going through somewhere wet, always have both hands free to break any fall. When working with a job you know has safety hazard, always be on the look out. My coworker broke her wrist because someone forgot to put the pallet in the correction location. Sometimes people are out to get you or maybe not even thinking of you (or your safety) so always got to have your own back. —sweethomeall

Other ‘lifesaving’ advice offered up ways to help keep stains out of clothes, how to drop a fat nard while you’re constipated, and how to chop an onion without tearing up.

I saw a comment on one of these kinda threads that recommended gently rocking back and forth while pooping. I’ve never had any problems in the bathroom, but I happened to be sitting on the toilet when I read the comment so I decided to give it a test drive. I was pleasantly surprised at how quick and effortless the whole experience was and I haven’t gone back to my old stationary technique since. As a bonus, #1 and #2 now require the same amount of time in the bathroom! —ASS_LORD_666

True lifesaver: if you are ever attacked by a dog, push your forearm INTO the bite. This pries the jaws apart and prevents them from clamping down. If a dog is attacking you, the best thing you can do is offer your forearm, push as far back as possible, and then grab the dog by the scruff of its neck with your other hand to hold it. The dog is now functionally muzzled and you have control of its head. The sooner and harder you push into the bite, the less damage the bite will do. —IAlbatross

And then there’s the top tier of advice you see in the thread: the advice that came from people who offered tips that actually might save a life. These legends talked about safer ways to defend yourself from a dog-attack, how a fallen man with a boner might have spinal injuries, and how to get a splinter out.

If you get a splinter that is still partially sticking out of the skin, put a drop of Elmers glue on it and let it dry. When you peel the dried glue off your finger, the splinter will be stuck on the glue and pop right off with it. —MagnificentUnicorn77

If a man is in an accident (car, ladder fall, etc) and he gets an erection, don’t move him. He has a spinal injury —SonOfGallifrey

As a paramedic this is true it’s called a priapism and is associated with a mid to low back injury.

Side note: unfortunately it might be his last erection —byrdcoryj

We’ve dropped tonnes of the advice through this thread. Give it a squiz!

Put your onion in the freezer for 10 minutes before chopping it. It freezes the juices just enough to slow down the process of it turning in to a gas, giving you a few minutes to chop the onion without tears. I learnt this tip from a kid’s science show years ago and I haven’t had to deal with onion tears since. So many people don’t believe me, and then are genuinely surprised when it works. —Lost_in_the_Library

Final thought: As always, we like to run with this sort of story and put our own spin on it. What’s a whack of ‘lifesaving’ advice you’ve got for the other blokes and sheilas in the comments section? Let us know. See you there!

The best thing about having a group of mates hanging out and drinking together has to be the banter. Providing every wanker is down with it, and no one’s gonna take offence, some of the best insults you’ll ever re...