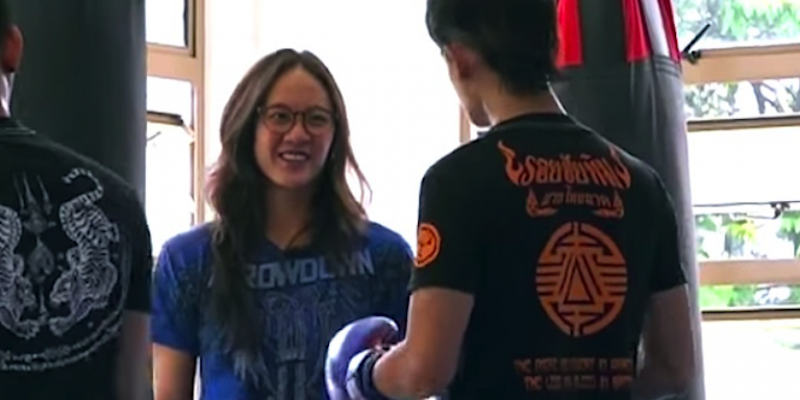 Female Muay Thai Champ Dresses Like A Nerd, Enters A Gym, And Challenges Dude To A Fight

When I was a kid, telling a guy that he “fought like a girl” was the height of disrespect. Nowadays, that feels really dated, especially with asskickers like Amanda Nunes and Cris Cyborg walking the earth.

And now Muay Thai fighter Germaine Yeap has hammered that point home in spectacular fashion with this awesome prank video.

In the clip by pranksters MaxMan.tv, a nerdy looking Yeap walks into Damansara Perdana Muay Fit gym in Kuala Lumpur, Malaysia, and struggles with the equipment before taking off her glasses and asking one of the coaches to spar with her… He is initially reluctant telling a frial looking Yeap “I just don’t want to hurt you” but she replies “I don’t think you’ll hurt me,” and “it’ll be safe,” which perfectly lays the trap for her prank.

When the pair begin to spar, Yeap starts off slow, throwing tentative jabs and copping a fair amount of shots but after a while, she flicks the switch and absolutely lays into her sparring partner. Yeap, who was previously the Kuala Lumpur women’s champion in Muay Thai, told the Total Martial Arts Academy in Coventry, England, that she originally got into Muay Thai by accident.

“I happened to stumble into the sport of Muay Thai in my final year of university,” she explained.

“The loud noises from the kicks and punches during a Muay Thai class at the university really drew my attention and it made me peek through the doors of the class.”

Yeap started competing professionally three years ago and managed to take out the DBKL Mayor’s Cup title, the Langkawi and Kedah Z1 International Cup tournaments, as well as bagging a bronze medal for Malaysia at the 2014 Asian Beach Games. Coming from a large, sporty family, Yeap was a tomboy, growing up; she had six older sisters and played all kinds of sports at school while also representing her native state of Penang in dragon boat rowing and tennis. No doubt, the sisters played a lot of pranks on each other, growing up, but this is some next level shit!

WATCH YEAP GET HER PRANK ON BELOW: