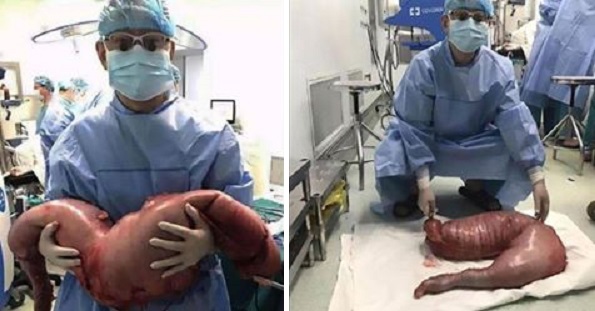 Surgeons in China have performed lifesaving surgery on a 22 year old man with what must be one of the largest bowel obstructions ever. The surgeons removed 30 inches of colon in a three-hour operation. The portion of colon removed weighted a massive 13kgs, or two stone! According to the surgeons, the man had months or potentially years’ worth of faeces blocking his colon. That sounds pretty horrific. I wouldn’t like to think I still have the shameful evidence of the Sizzler Cheese Toast Incident of 2015 still in my lower intestines.

The man is suffering from a lifelong condition called Hirschsprung’s Disease. The patient first developed symptoms of the disease at a young age, appearing pregnant from his swollen belly. This condition results in the individual missing the nerves that control the bowels. These nerves help to squeeze out the poop and when these are missing, poo can build up and then cause a blockage. When the surgeons first met the man, they were shocked by the size of his abdomen. The surgeon, Dr Yin Lu of the 10th People’s Hospital of Shanghai, said that it “looked like [it] could explode at any time.” The patient was stable after the operation, and is expected to make a full recovery.

Really, we should all be glad that this man sought the help of trained medical professionals, unlike another gentleman in China who shoved an eel up his bum to solve his constipation. The man from Guangzhou told doctors that he was advised to try the remedy by friends. After shoving the 20 inch Asian swamp eel up his butthole, he found himself suffering from unbearable pain, funny enough. In an interesting twist on the “I fell on it” excuse that most people go with when they present to the hospital with an unusual object up their butt, the man told the doctors that it had swam up there itself. The patient later admitted that he had put it up there voluntarily, following the local folk remedy. The eel was removed surgically, and the man has hopefully learnt a valuable lesson in the importance of not becoming rectally intimate with sea creatures.