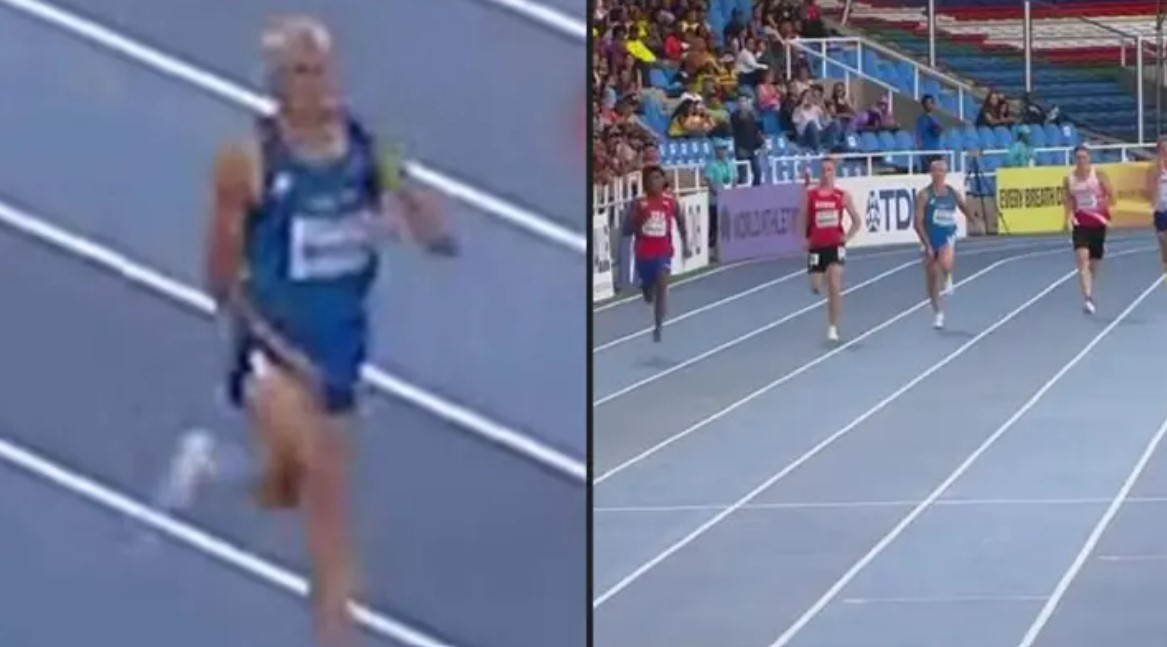 You know, for some of us, the idea of running 400 metres is pretty f**ken daunting. Yeah, nah, deadset, even if there was a bakery at the end of that, some of us wouldn’t bother, but imagine being Italy’s Alberto Nonino…he just competed in a 400-metre race at the Under 20 World Athletic Championships with his wanger out!

Deadset, for him it wasn’t just a long race, it was a schlong race!

And yeah, we’ll be straight-up, if you don’t like dick jokes, this article might not tickle your truncheon.

Nonino turned the decathlon into a dick-out-athlon shortly after the race began. He started well, but it didn’t take long for his junk to try and become a free willy. Yeah, nah, as he fell back in the standings, viewers noticed he kept reaching down to tuck it back in.

Sports journalist David Sanchez de Castro said, “His penis escaped out of the side of his shorts, and he had to hold it because it wasn’t allowing him to run properly which is normal when your dongle is swinging from side to side.”

ALBERTO Nonino Loses Race in Colombia After His Penis Came Out While running 400 m decathlon…..😛😛 pic.twitter.com/XynIdRHZgj

Unfortunately for Nonino, he ended up finishing last. Because he’s a good sport, though, he’s taking it in his stride. Don’t get us wrong, he’s not swapping to the baton anytime soon, but he’s spoken about the event on Instagram, and despite his initial disappointment, he’s doing all right.

“I’m trying to laugh about it now but immediately afterwards I felt terrible and I’m thankful to my friends and family for helping me get over what happened a few hours later.”

He went on to say, “The journalistic world worries about cases of bullying throughout Italy and around the world and then publishes these articles that for a more sensitive person could have done a lot of harm.”

Yeah, nah, you’ve gotta say that on this occasion, his spam javelin didn’t belong on the field.

Final thought: Yeah, look, Nonino raises a fair point about the world of journalism being a bit hypocritical, but we’re gonna focus on the funny side of it. Where’ve you been when your whammy bar made an unexpected appearance and how did it f**k up your day? Let us know in the comments section.

Just in case you missed it, here’s one of Ozzy’s latest commentary videos…Get to the Chopper