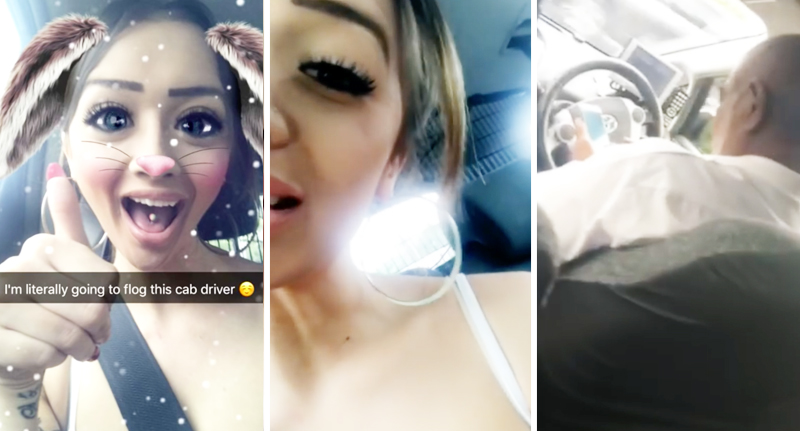 If there’s one thing people have less patience for these days it’s a self-righteous arsehole spouting off at the mouth with their verbal garbage, especially online. Regardless of how many followers you have you could lose them all in an instant if you stop swaying in the same metaphorical direction. It’s one thing when you’re pointing out an error or clarifying a point you’re trying to make against someone else and another entirely to act like a narcissistic, stuck-up little prick. Gender doesn’t even factor into this equation, people are just getting tired of it.

For the most part the video you’re about to watch is of a young woman getting into a taxi and realizing the driver doesn’t have a clue where he’s going. Instead of attempting to guide him to help the situation progress in an agreeable manner, this little princess let her bitch flag fly strong and proud! Nearly the entire cab drive she she talks the biggest amount of crap I have ever seen another human being talk and according to her own words this went on for fifty minutes. Fifty! I mean, after the first five and you realize the driver doesn’t know where they’re going to gently nudge them in the right direction and call it a day, but not for her. She couldn’t be bothered to read off any directions for the poor chap, she was too busy recording herself talking trash.

The driver did his best to keep his calm and probably offered her a free ride since it was taking so long (the original trip was only supposed to take around 15 minutes), but because of the general poor attitude she gave him the whole time it seems he thought better of it. After watching the video you won’t really be able to blame him.

In the end she decided to post this video online, probably believing her adoring fans would immediately rush to her side to defend the importance of that minor inconvenience to her day. Well, that’s not what happened. Most people absolutely hated seeing that terrible side of her, but that’s what happens when entitlement runs rampant.