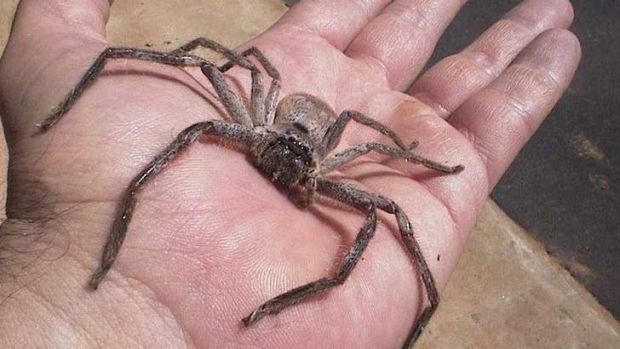 Huge Australian Spider Caught Dragging A Mouse Up A Fridge

Just when you thought you had seen the worst of Australian wildlife, a video emerges that shakes you to the core of your meat-pie eating, VB drinking soul.

We always like to think that people exaggerate about the danger of our wildlife but honestly, I can’t argue with them now. I used to pretend that we lived in a country of relative safety. A quiet place where your local KFC closes at 10pm and the native animals will probably leave you alone. That’s just shattered now. Not the KFC bit though.. the corporate knobheads keep ignoring the letters I’ve been sending them explaining that you should be able to get hot chips after 10pm.

If you’re reading this though KFC, we cool. I didn’t mean to call you all knobheads. I only do it out of passion for the chip. In the video, originally posted on Aussie Off Roaders Facebook page, you get 19 seconds of pure Australia. The huntsman, that little Aussie battler of a spider, he had a dream. He dreamed of feasts greater than just a piddling little cicada.

Greater even than a cockroach. He saw a small dead marsupial, and he knew he just had to have it. Although really, we’re only assuming he found it when it was dead. Maybe he did the killing? We will never know. Only this King amongst huntsmen shall know, and I presume he’s probably still in a food coma after that feed. Anyway, check out this magnificent feat of strength and agility below. I watched it six times, and it gets better with every viewing.