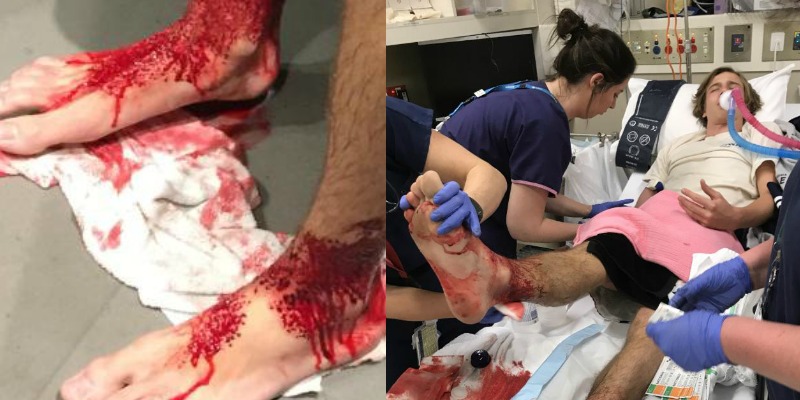 This is the stuff of nightmares! Melbourne resident, Sam Kanizay was carted off to hospital on Saturday evening with blood streaming down his legs after something ate his legs during a post-footy recovery dip. Sam had gone for a half-hour wade out into the water to remedy his tired legs.

When he exited the water, he was brushing what felt like sand off his legs and looked down to notice a bloodbath down there! After whacking on his things and strolling home, he and his Dad realised they couldn’t stop the bleeding. Crikey! “Blood covered both of my feet and I was leaving little pools (of blood) everywhere. I thought I had maybe stood on a rock, but the amount of blood quickly told me that wasn’t it,” he said.

An investigation by Sam’s Dad, Jarrod revealed that the monsters responsible for the dilemma were, in fact, a variety of ‘sea-louse’. Sea lice are aggressive feeders, in some cases feeding on blood in addition to tissue and mucus… But they normally go for dead or dying creatures. As Sam was standing still for so long, it’s possible he exhibited similar behaviour to a dead fish in the ‘eyes’ of the sea lice. What’s more, Sam probably didn’t feel their microscopic pincers going to town on his flesh because the water had numbed his lower half. This is a super-rare occurrence at the popular swimming spot near the famous Brighton Beach boxes. Sam agrees that it’s fairly isolated and will venture back out once his trauma subsides! Tell you what though, young Sam must be counting himself lucky that he didn’t decide to sit down in the water!

Jarrod was able to fish some out of the water and bring them home in an Esky. Despite the blatant waste of quality meat, what the little bastards do to this steak is insane!