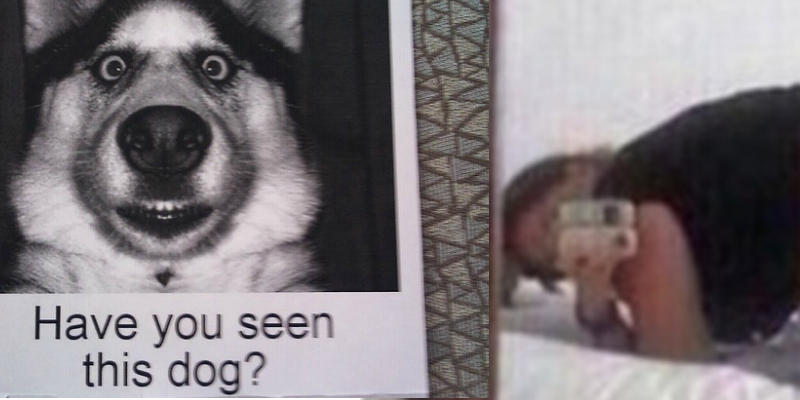 If you lose a pet, whilst it’s traumatic there are both traditional and modern methods to assist with tracking them down. Some people print off dozens of ‘lost dog’ signs and stick them to lamp posts around the neighbourhood. Others may jump onto social media to cast a wider net in the hopes of a happy homecoming. The power of Twitter has been used successfully before to help reunite lost animals with their owners. But one Twitter user has taken this to the extreme. In a bid to see her beautiful dog Ralph home safe, she has posted a provocative mirror-selfie of herself and the dog as it “the only pic” she has of him. What makes the image all the more disturbing is that Ralph, the filthy creature is getting all up in that business. His nose appears to be mere centimetres away from the woman’s bits and pieces. No one really knows what prompted the picture to be taken in the first place, there’s certainly plenty going on in the shot! The disturbing picture surfaced on twitter in 2014 and definitely had its desired effect being retweeted some 973 times. Many said the shot is merely attention-seeking whilst others were out there genuinely looking for the dog. Given incredibly graphic and disturbing nature of the shot, perhaps Ralph had had enough and fled for greener pastures.

We can only hope that Ralph found another happy home to set up camp with. Perhaps one where the owner takes more appropriate selfies with their pet!