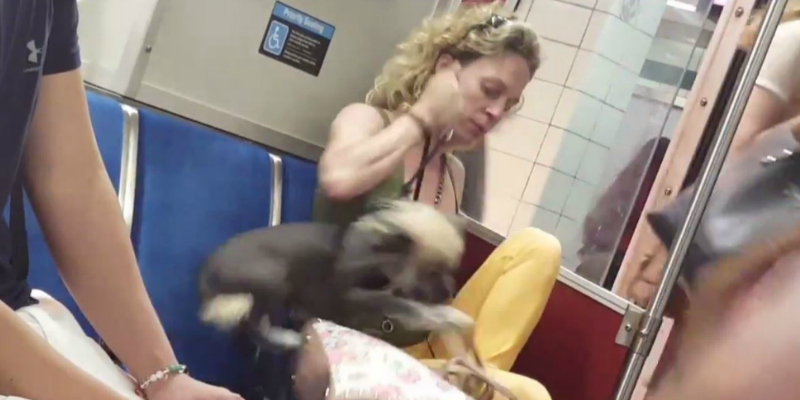 A Canadian woman has been the subject of considerable social media backlash as she was filmed tormenting and abusing her dog on board a train in Toronto, Canada. It’s not just animal rights activists voicing their opposition to the behaviour. Dog-lovers everywhere are shocked and appalled by it.

Throughout the opening of the video, it is as if she is oblivious to the other passengers as she torments the poor creature. She repeatedly yanks the dog by its leash. She grabs it by the back of it’s neck before biting the dog’s face. This act results in her getting hair stuck in her teeth.

She blows violently into the dog’s face and strikes on the back of the head. At times she shakes the dog violently. The abuse culminates in her holding the dog up by the front legs and puppeteering it to passengers as they alight the train. The woman appears agitated throughout the footage and fidgets. Social media commentators have identified her as being on some kind of drug at the time displaying erratic personality changes from loving to violent.

After a minute or so of this abuse, the woman is confronted by a man in a grey t-shirt who asks her to stop hitting her dog. It is difficult to pick up exactly what the man says, but she obviously doesn’t like it. She is dismissive, asking him who he is, and repeatedly cutting him off by thanking him as he speaks to her. The confrontation takes her away from abusing her dog which was the desired effect. People have branded the person who filmed the footage as a coward for not speaking up and covertly filming the disgusting behaviour. Some have gone to the extreme of saying they would have confiscated the dog from the abusive owner. However, others retort that this would be classified as illegal under Canadian animal abduction laws.

Besides, the unpredictability of the women who could be dangerous has also been brought to light as a good reason not to confront her.

View the shocking footage in full below.